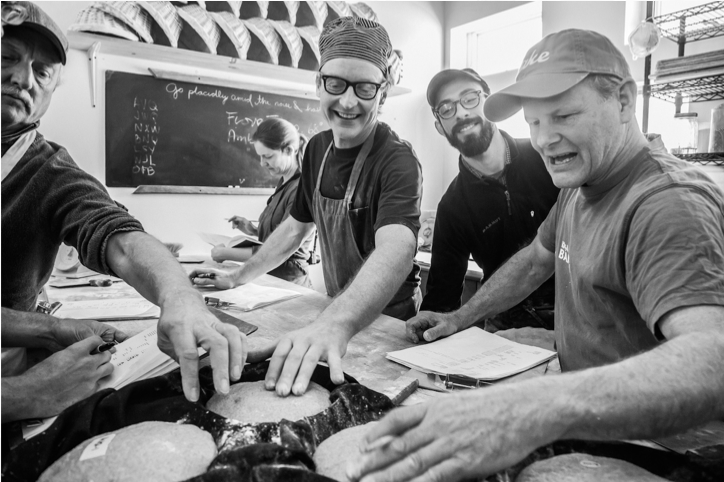 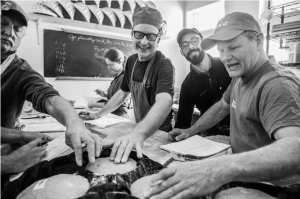 Stefan Senders of Wide Awake Bakery, just outside of Ithaca, New York, is reacquainting people with local flours. The bakery uses locally grown and ground flour in its breads, and Stefan helps professional and home bakers learn to use these unusual ingredients.

“You have to be reading your dough all the time,” Senders says to students. “This is a romantic question: What does the dough want?”

While local flours are just coming on the radar for mainstream eaters, they’ve been around long enough to earn a bad rap with commercial bakers. Unlike flour sold under national brands, which are a blend of the product of acres of industrial-scale grain fields, local flour is seen as unpredictable. Bakeries are reluctant to gamble with irregularities in protein and moisture content because the losses in time, dough, and product can be considerable.

But wait, didn’t all flour used to be local?

Indeed, before the prairie became the place to grow nearly all our wheat and other grains, all farming, milling, and baking happened close to home. If you ended up with low protein flour, you couldn’t opt not to bake with it. Back then, bakers had to have a deep understanding of flour and a tolerance for the obstacles seasonal variations could present.

Today, these skills are making a comeback. Senders’ one-day workshops, which he co-teaches with two other bakers, are crash courses in understanding the idiosyncrasies of this ingredient. 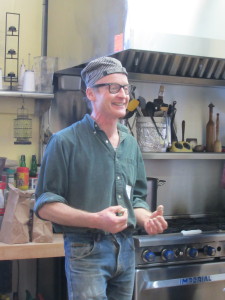 “One of the great complaints about local flour is it’s too variable,” he told a recent class. “If the baker is not being precise, there’s way more variability on [his/her choices] than in any flour ever milled.”

Some of the students nodded. Day to day, a baker makes lots of tiny and inadvertent changes. Inaccurate measuring, lack of attention to timing, or the chemical and biological processes responsible for bread can add up to bad loaves. Professional and home bakers know how much work it takes to make any flour, let alone local ones untamed by blending, into bread.

“Traditionally, it’s said that the baker plays with time and temperature, but of course there’s plenty more than that,” said Senders. “You can adjust the quantity and vigor. You can play with the length and intensity of the mix … and so on.”

In a sense, the baker, the ingredients, and fermentation process are in conversation. Local flour just requires a little more listening. And that’s not the only dialogue that matters. Fresh flour means the farmer listens to the land, and talks to the miller about what has grown. The miller talks to the baker before the baker begins to chat with dough.

Wide Awake Bakery is now three-years-old, and part of a farmer-miller-baker partnership. Farmer Thor Oechsner co-owner in the bakery, also owns Farmer Ground Flour, which stone mills organically grown New York State grains. Millers Greg Mol and Neal Johnston are in contact with both the baker and the farmer, working in a way that has gone out of fashion. As a well-informed user and interpreter of this particular flour, Senders can also talk to the mill’s commercial customers. He speaks bread.

At the industrial scale, there is little communication between the people who handle grain. Farmers talk to grain merchants, who deliver grain to mills. Both grains and flours are created to hit performance specifications for baking. In effect, numbers talk to numbers. As the food chain shrinks, people have to talk to people again.

Organizations throughout the country are collaborating to foster these conversations. In the Northeast, a number of groups are bringing together key players. Among them are GrowNYC, which runs farmers’ markets throughout the city, and OGRIN, the Organic Research and Information Sharing Network. They are both partners on grant projects, like a recent one from the U.S. Department of Agriculture’s Rural Microentrepreneur Assistance Program, which led to Senders’ classes.

The classes are a great way to introduce people to local flour. Senders teaches at the bakery and in other settings, like Northeast Organic Farming Association of New York’s winter conference. His classes attract a range of bakers. Some of these people are farmers, too, looking for a way to add value to what they grow. And one man came to Ithaca from Canada, seeking information as he planned a small farming, milling, and baking enterprise.

Other people are looking to build their baking skills. A couple from the Adirondacks came to research a bakery project. And a serious home baker traveled from Maryland to get clues about working with freshly milled flour.

“A lot of people have been baking for years and everything has been hunky dory. Then they taste [local] bread, and they want to up their game,” Senders said. “This thing that appeared to be not mysterious at all was suddenly made mysterious again.”

As a teacher, he then works to remove some of the mystery, beginning with an analysis of what makes a good loaf.

“Bread is like a balloon full of little tiny balloons,” he said recently, diving into a tiny treatise on gluten, how it is formed, and how gluten quality varies with different grains, like rye and spelt. In Senders’ classes, you can sense people’s interest rising like dough as he explains the principles, theory, and science of bread. He covers the structures of grain kernels so people can understand both stone and roller milling procedures, and how the resulting flours work differently.

Everyone gets a chance to calculate desired dough temperature, fussing with water, weighing and mixing doughs, and shaping and baking loaves.

As a hint of the size of the undertaking that is bread, Senders refers to advice he received from Jeffrey Hammelman, director of King Arthur’s Bakery and author of the book Bread: A Baker’s Book of Techniques and Recipes: “You can never master bread,” Hamelman told him. “You’re just happy to befriend it.”

Top photo by Allison Usavage (see more of Allison’s shots of Stephen and his class in this photo essay).

Photo of Stephen within the story by Rachel Louise Lodder.