When I was in high school, a science teacher took questions from the room about what factors contributed to the demise of grass lawns. When someone raised a hand and said, “weeds,” she let out a shrill laugh and wrote on the chalkboard: “Weeds = Plants Where People Don’t Want Them.” Years later, attending an edible foraging tour of Brooklyn’s Prospect Park with “Wildman” Steve Brill, I asked our guide why hedge mustard isn’t harvested wild like ramps in the spring. He didn’t so much as laugh, but let out a frustrated exclamation: “Because people don’t think of it as food.”

Two new books explore the kingdom of wild edibles, written by gracious experts. Christopher Nyerges’ newly updated Guide to Wild Foods and Useful Plants offers a lean manual on the practical methodology of plant selection and use. Eating Wildly, by Ava Chin meditates on the personal and spiritual revelations that foraging can unearth.

In Nyerges’ book we find tactical illustrations, photos, and 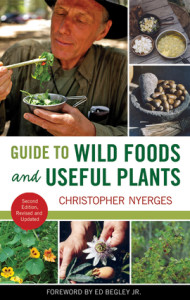 nomenclature for plants found across the country. The author includes personal anecdotes and folk wisdom on the plants, along with their beneficial properties and homey recipes like acorn bread and rose jelly. Many of the plants Nyerges has dissected will sound unfamiliar to most readers yet grow abundantly in the wild. The addition of 100 color photos to the revised book edition helps give readers an experience more akin to taking a guided foraging tour, which Nyerges has been leading since the 1970s.

The author, editor, and director of the School for Self-Reliance in Los Angeles has focused his career on changing our perception about the natural world around us. He writes in the introduction: “Today, though we’ve created vast amounts of material abundance, we seem to have lost our way in our technological wilderness. We have forgotten our roots.”

Nyerges’ book was originally intended as a survival guide. But it offers more than that. By identifying plants that may have no name, place or purpose in today’s society and revealing a world of history, uses and lore, the book wisely and matter-of-factly encourages a deeper relationship with nature. The message is also empowering. “You will gain a heightened sense of responsibility to be a keeper of the flame, to strive to learn and use the ancient skills of self-reliance,” Nyerges writes.

I have often thought of foragers as a secret society that safeguards lush and mysterious treasures. This sect alone could sniff out precious foods—even in places as dense with civilization as downtown Brooklyn—while keeping their bounty secret. But Eating Wildly dispels this myth in the first chapter, where Chin recounts stumbling on oyster mushrooms in a part of Prospect Park where she had been looking for lambsquarters. By sharing her discovery, Chin makes it clear that there is wild food available to be found by anyone who looks hard enough. 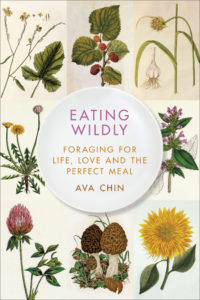 Chin, the author of The New York Times’ City Room blog The Urban Forager, is an unlikely keeper of wildlife secrets. Raised in Flushing, Queens, by a single mother and immigrant grandparents, she pontificates beyond the dangerous and the delicious. For her, foraging for her own food was a way of “transforming old feelings of being ‘not good enough’ or ‘unworthy’ into new ways of seeing and being, like fresh wild asparagus or violets erupting from the earth every spring.”

Eating Wildly is a narrative memoir that follows Chin through childhood, from digging up wild garlic in the backyard to preparing fully foraged meals in her apartment as an adult. She weaves in anecdotes about the old Chinese ladies who collect gingko nuts in the fall, and the thrill of catching an edible main course on a class fishing trip. Throughout the journey, we see Chin finding her place as a writer, teacher, and member of a family, as well as a growing community of urban foragers.

The lessons that can be learned from these books on foraging are perhaps as diverse as the plants that still grow freely, often in the most unlikely places. But, it requires a willingness to focus in on what is invisible to others, be it an edible “weed” or a hidden delicacy.

Chin writes, “Foraging for food is a little like a mythic quest. You may think you know what you want, and expend a lot of energy and dogged determination making lists and plans for obtaining it—losing a lot of sleep and garnering no small amount of heart-ache along the way—only to find it shimmering elsewhere, like a golden chalice, just out of reach.”