The Love Lives of Farmers: How to Make Rural Romance Work | Civil Eats

The Love Lives of Farmers: How to Make Rural Romance Work 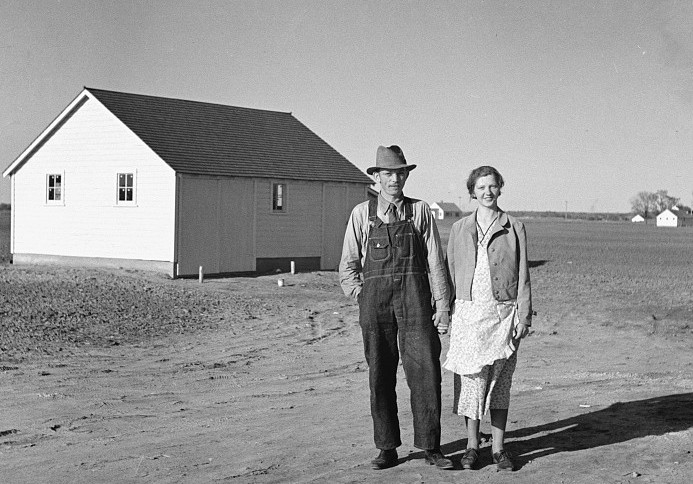 When a friend of mine moved to a rural part of California, she called her new home “BYOB” or “Bring Your Own Boyfriend.” “The pickings out here are slim,” she said.

The problem with this advice was that my dater’s luck in the city hadn’t been so great either. And on the many nights when I waited for a guy to call, I doped up on rural romances. I treated my disappointment with the hope that outside city limits there was a place—Farmland, America—where the cowboys were monogamous and the vegetable growers knew how to ask a girl out.

So I started asking farmers about their love lives with plans to write about what I found. But I also had my own agenda: I wanted to know if I moved to the country whether there would be someone there worth having a relationship with. I was looking for the pastoral version of a romantic cheat-sheet, a farmer’s guide to successful matches.

For six months, I called long distance and drove back roads to talk to farmers and ranchers about dating and marriage. Some of the men and women I met were hitched and some were single. Some were in their 20s, young and searching, and some were much older. All were sustainably-minded; they were determined to harvest food that was both nourishing to eat and good to the earth.

After dozens of interviews, I came away with a sense that farming is harder on relationships than it is helpful. Over 90 percent of U.S. farms are run by families, usually made up of a couple, either married or not. And the stories I heard from farmers seemed to suggest that the tough economics and isolation of farm life often complicate love.

Let’s Grab a Drink–after I Feed the Pigs

Despite efforts by websites like FarmersOnly.com, I was often told that finding an agrarian date isn’t easy. The average American farmer is 58-years old and most likely spoken for. The single farmers that are available don’t have much time for candle-lit dinners. A day in the field can be so long and physically tiring that Jenni, a vegetable farmer in Sonoma County, California, said, “You know you’re on a date with a farmer when he falls asleep at 8 p.m.” Hand-weeding for 10 hours can take a toll on your mojo.

Not every rural bachelor or bachelorette is hoping to settle down. A group of young pasture-based livestock farmers in Northern California told me they weren’t ready to commit to anything—to farming or to relationships.

They had moved from the city after college with the noble vision of raising animals under the sun and on grass, instead of animals slammed into pens and bulked up on growth-hormones. But the money in agriculture was slow and the labor involved could be brutal. Just as there were other adventures to try, there were other people to meet.

“We’re in our twenties,” said one rancher named Kate. “It’s hard to think that for the entire rest of our lives we’re going to want to be with one person.”

For farmers who do hope for a steady companion, finding a mate who can handle the daily chore list might be one of the biggest obstacles.

When Your Partner Doesn’t Want to Get Dirty

More than one farmer I spoke to had lost or given up a relationship when a partner wasn’t willing to help them work the land. A farmer needs someone who can sign on for strict hours, manure-sprayed clothes, and a sore back. On well over half of the nation’s farms, at least one partner earns an income off the farm, but still the demands of an agricultural operation will almost invariably affect both people.

“He gave up too much,” Lisa said about her husband Will, the day I drove to their sun-bleached farm in eastern California. The curtains were drawn and the floor of the house was scattered with baby toys and unpacked boxes.

The couple had moved from San Francisco the year before to a small farming town, population 3,000, because Lisa had wanted to raise animals and grow food. For years, she’d been saving money to buy land. When she married Will, they pooled their income to make the purchase sooner. But it might have been too soon.

“I don’t think I understood what I was getting into,” Will said, the morning I visited. “I didn’t realize how much work it would be and how little money we would make. I left my job and everyone I knew so that we could come here.”

While Lisa raised sheep for meat and grew organic produce, Will was taking freelance tech gigs to pay the bills. As he typed at his desk, his back was to the orchard and garden outside. He didn’t even want to discuss farming, especially with their neighbors, who only talked crop yields and irrigation techniques.

“He resents me for making him come here. And I resent him for not wanting to stay,” Lisa said.

And Will and Lisa aren’t alone. As one grass-fed cattleman put it, “If you marry a rancher, you marry a job.” There are calving cows in the middle of the night, steers on the loose when you’re the only one home to do anything about it. Three hundred sixty-five days a year there’s livestock to feed and fences to move. That’s a tough ask in a country where only 1 percent of the population farms and most potential mates are more accustomed to 9-5 schedules than to 4 a.m. milkings.

From Farmer to Farmer’s Wife

Even when two people agreed on all points agrarian, running a small business together tried many of the farm couples I met. Who would set the schedule? How would they make financial decisions? When the crop price came in low and the lettuce field froze over would they still feel like sharing a bed at night? And once they had two kids, who would come in from the greenhouse to clean diapers and spoon baby food?

“I miss putting in a 15-hour day outside,” Haley said over the phone from her organic dairy in Maine. “Now that we’re parents, my husband Rick is out with the animals most of the time and I’m inside with the kids. Sometimes I see him walk by the kitchen window, but that’s about all the interaction we have until supper time.”

Before she and Rick had children, Haley ran organic produce farms on the West Coast. She earned a Bachelor’s degree in agronomy and a Master’s in International Agriculture Development from UC Davis. Farming was her career. And like so many mothers in any line of work, she had had to step back for the time being.

“When we sell at the farmers’ market, customers think my husband is the real farmer. I’m just the farmer’s wife. I’m just mom,” Haley said. Soon after the birth of her second child, she started seeing a therapist to deal with depression. She was anxious to return to farming full-time once her daughter and son were older and needed her less.

“Farming with family only works if you have childcare and community support and most of us don’t have either,” she said. Hiring a babysitter is too expensive for the average small farmer and urban or suburban transplants like Haley and her husband rarely have large networks of friends and relatives to call on for help.

Why Farm Love is More than Pillow Talk

“It almost feels taboo to say what’s unromantic about farm life,” Haley said before we hung up the phone. I could see what she meant, since I’d been more than guilty myself of oversimplifying rural America.

Yet, even as the farmers I met described their struggles, most didn’t want to give up on farming. They wanted strategies for dealing with the stress in their marriages. They wanted solutions for childcare and balancing kids with work. Again and again, they asked me how the other farmers I’d talked to were overcoming the same challenges.

And maybe this is where agriculture groups need to take the conversation next. How can rural communities support young parents? How can single farmers meet others who share their values? How can farm couples draft business plans to protect their profit and their partnership? Attracting a new generation to farming depends not only on the economic viability of crops, but also on the social viability of farm life. It depends on stewarding relationships as well as the land.