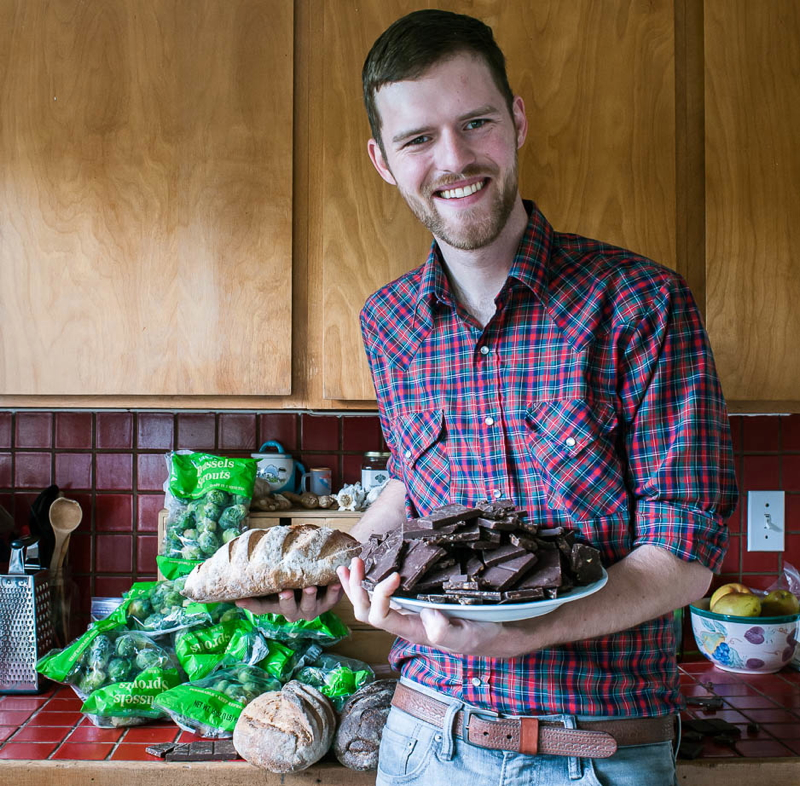 Jeff Emtman opens the door of his freezer and one-by-one removes the contents. He pulls out several pounds of Brussels sprouts, loaves of artisan bread, cinnamon rolls, three-plus pounds of locally made chocolate. And there’s more.

Emtman, a Seattle resident deeply concerned about food waste, acquired his bittersweet collection in dumpsters located on FallingFruit.org, a long underground source for dumpster divers or “freegans” who dine on out-dated, over-stocked or overripe food tossed out by stores, restaurants, and bakeries. Now, the map is no longer a buried treasure.

In April, Caleb Phillips and Ethan Welty, FallingFruit’s founders, went public with the global dumpster map, which is just one of several options the site offers, including the location of fruit trees and other foraging opportunities. Recently, the pair has begun speaking at food justice conferences, contacting online freegan communities and handing out stickers, expanding the site’s fan base. Calling it the most extensive and diverse map of its kind, the pair’s ultimate goal is to shed a bright light on the enormous quantity of food that goes to waste–in this country and abroad.

Phillips and Welty are raising money to create a FallingFruit mobile app for foragers and divers through Barnraiser.us, a newly launched crowdfunding site specifically designed for food and sustainability projects. They hope to raise $10,000 by the end of May.

To create the dumpster map, men spent months combing the Internet for dumpster location information and painstakingly checking each entry before adding it to their site. Their hope is that other freegan sites such as trashwiki.org and freegan.info will embed the FallingFruit map.

To date, there are at least 2,500 bins on the map with up to five new ones added daily. Welty estimates that around 500 people are using the site every day and he expects the numbers to rise as summer kicks in. Along with most U.S. cities, map users have entered dumpsters in Antarctica, Jamaica, and even the North and South Pole, says Phillips.

“We wanted to take [dumpster diving] from being a secret hobby to something that illustrates first-hand how ubiquitous food waste is,” says Welty. Despite the fact that 40 percent of the food produced in the U.S. goes uneaten, few people spend much time thinking about food waste. But, Welty adds, “You can only feel [the magnitude of] it when you open up a dumpster and see what’s in it.”

Considered an anti-consumerism movement, dumpster diving, bin raiding or “skipping” as it’s known in England, where dumpsters are called skips, is said to have its originated with the Diggers, a group of 1960s artists and activists who lived in San Francisco’s Haight-Ashbury district and distributed rescued food on the streets.

Who are today’s divers? Meitar Moscovitz (screen name MayMay), a traveling software programmer, says he lives on the road and depends on FallingFruit for “literal sustenance.” His best find so far was around $100 worth of recently expired cheeses.

“It’s been amazing to realize that wherever I am, food is not far away,” says Moscovitz. “My situation may seem unusual at first, but a lot of people I’ve met dive.”

Is dumpster diving legal? According to Freegan.Info, a popular site for divers, “Dumpster diving is legal in the United States except where prohibited by local regulation.” In other words, legality varies place-by-place. (Here’s a rundown of the law in California, for instance). “Folks should use their own discretion and study the laws where they live,” says Phillips. And when it comes to food safety, most divers avoid meat and dairy, focusing instead on dry and canned goods (often with bent or torn packaging), baked goods and produce they can prepare later.

In Winterthur, Switzerland, 29-year-old Mylene Jacquemart came across a “green bin” flush with delicious apples and added it to the FallingFruit map. The apples became a pie and she’s now searching her neighborhood for more “mappable edibles.” The town also collects unsellable food from stores that is placed in a community fridge. “It’s not your classic dumpster, but check out www.restessbar.ch next time you’re in Switzerland,” she says.

Founder Phillips, who treasures brown bananas from dumpsters, believes everyone should try “diving” least once to experience a new awareness of what’s in the bins behind their local grocery store. “It’s a compelling thing to do and it changed my life,” he says.

By posting the dumpsters on the map, Phillips also hopes to highlight “serial wasters” and “cause them to do some rethinking.”

Don Rakow, a professor of horticulture at Cornell University believes the locavore movement has shed new light on urban foraging as well as the freegan movement. But more importantly, he says, it has empowered people with limited budgets, giving them more food choices. “They are taking control of local resources rather than relying on governmental largesse,” Rakow explains.

While most freegans enjoys the free food, Emtman says he hopes to one day find dumpsters with no food waste in them at all.

In the meantime, he says, the FallingFruit map has led him to discover Seattle’s neighborhoods. Emtman recently began dating a woman who lives near a bakery that throws out leftover loaves of bread in large flour sacks. “When I learned where she lived, I immediately checked out the map to see if was near any good dumpsters,” he recalls. “It makes dating her doubly good.”