Faces and Visions of the Food Movement: Katherine Deumling 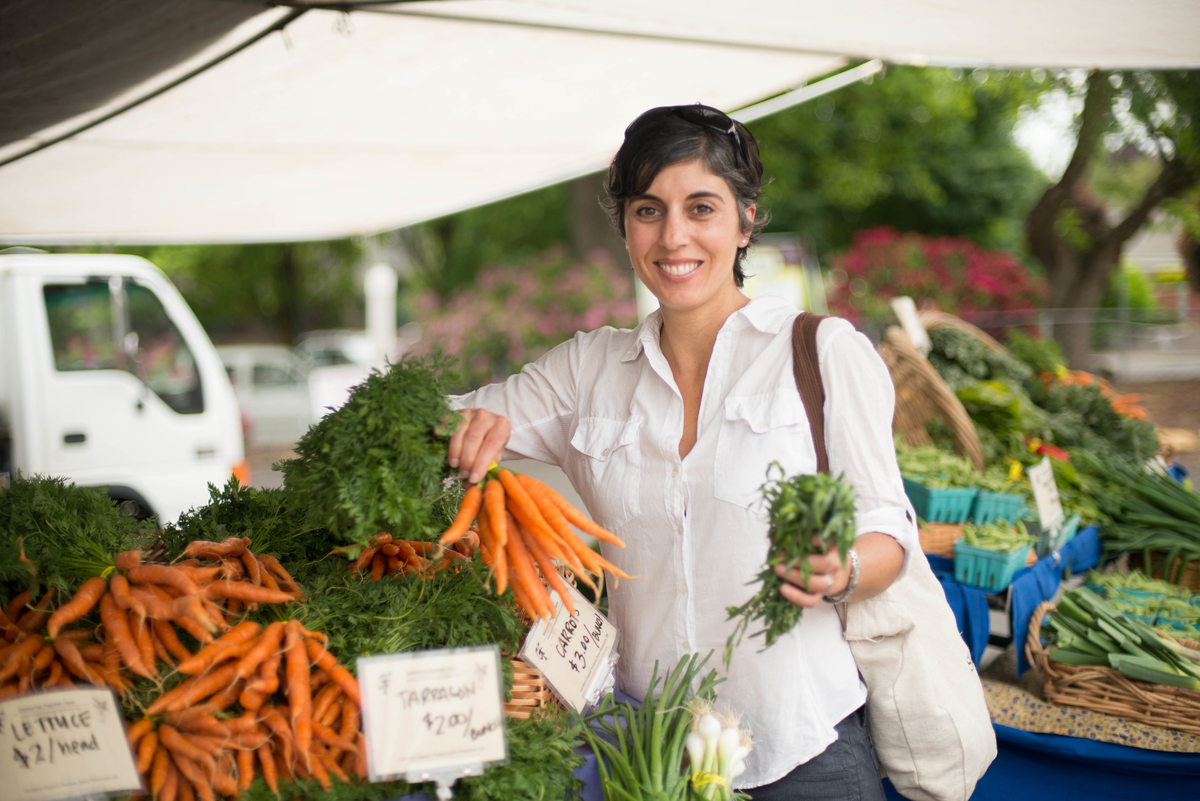 Have you ever looked into your cupboards and sighed because you couldn’t figure out what to make for dinner? If so, Katherine Deumling is here to help. Deumling is the woman behind Cook With What You Have, a Portland-based company that encourages people to experiment in the kitchen with new ingredients while still relying on familiar staples. Her recipes celebrate fresh, seasonal fare and use simple techniques to build confidence in cooking with what’s on hand, without last-minute runs to the grocery store.

Deumling is also on the board for Slow Food USA and was the head of Slow Food Portland from 2003 to 2008. Civil Eats recently caught up with Deumling to talk about building healthy, just communities and reinvigorating the food movement.

With Cook With What You Have, it’s the need around knowing how to cook with simple, unprocessed, inexpensive ingredients. I experience so frequently the small shifts that have huge impacts on people’s lives, health, and wellbeing. The need combined with the opportunity for growth and change is what inspires me and keeps me going.

Since half of my work with Cook With What You Have is writing recipes for CSA farms and their members, farmers inspire me every day to think about our volatile climate, and the incredible burden and opportunity they bear in the work that they do to bring delicious food to the table. My second inspiration is really helping [farmers] thrive and be supported for the sometimes very thankless work that they do.

Slow Food gives me the opportunity to talk much more nationally and globally about our food system and the notion of food sovereignty. And about how to continue to create alternative models and systems of sourcing food and celebrating and supporting our producers of all kinds.

The Slow Food leadership conference in New Orleans in May 2013 had a real focus on equity and access, and really tackled race and class. We talked about how Slow Food, in order to be relevant and true to our good, clean, and fair for all [ethos], had to look really hard at how we could be working with other communities, asking more questions, and being more collaborative.

But I also work with companies and agencies on their wellness programs, and it’s sort of like greenwashing. Everyone makes these large claims about wellness and being preventative and proactive, but there’s little money attached … The challenge is having them put their money where their mouth is, because systemically we’re not going to make big shifts if this is a symbolic, token effort to help people improve their lives.

La Vía Campesina’s work globally is of great interest to me, and sometimes under the radar but their network is quite vast. I would put Slow Food in there as well. Slow Food’s European presence is asked more and more to be at the table on major EU policy issues and beyond, and our work around bio-diversity and the Ark of Taste is incredibly relevant.

There’s a group [in Oregon], Friends of Family Farmers that helps bridge the gap between urban and rural people, or producers and “co-producers” as Carlo Petrini [of Slow Food] calls them, to recognize their mutual interest and interdependence so that policy-related things that can come out of that. An organization like that is exciting on so many different fronts, whether it’s linking young people to land or making farming accessible as there is this resurgence of interest in farming.

What do you think is the role of grassroots communities? Policy makers? Businesses?

Nowadays, there are these “buy your way into health” [messages], so instead of policies that are progressive and sweeping, there’s organic. Which is great, but you have to be able to afford it. Organic should be the default so it’s what everyone buys, but without advocating for policy change, you get less and less systemic change in society because those with access, whether its intellectual or human capital or dollars, can theoretically live a healthy, cleaner life. It’s not for the common good. So I guess the role of policy is one of equity. Systemic change isn’t just going to come with “vote with your fork” campaigns. I just don’t think that’s enough.

We’re kidding ourselves if we think we’re only going to feed ourselves on small, diversified farms. I would love to think that we could, but we need mid-scale, we need large-scale, we need folks that bring integrity and ethics to any scale of business. And that comes with smaller profits but more integrity toward people and land.

What is the most important change you would like to see in food in the next 5-10 years?

A minimum wage increase, as big as possible. I think poverty is at the root of a lack of health.

What needs to happen for that to occur?

Sign up today
Sign up today
[We have to] enable people to not be in a hopeless spiral of poverty. I’m all for bringing produce to places where it’s needed, absolutely and completely, but it’s not enough. And I think it’s an uphill battle and one that won’t show a lot of results until there is a policy related to wage, poverty, and jobs.

From a business and policy perspective, it makes economic sense to pay people more because they can use those dollars in their community and they aren’t dependent on the safety net. So lets try to move the needle and make it a different kind of argument—not a classic liberal argument about the morality of it, but maybe an economic argument.

What do you think that movement needs to do, be or have to be more effective?

I think we could use some new spokespeople. I love Michael Pollan, but I think we need some new voices that can speak to the complexity of the movement. There are all these different tenets of the movement, and we need to have some cohesion and understanding of everyone’s place in it and the importance of all the pieces and their interconnectedness. Labor and the human rights also need to be much more front and center. And we need talk about the pleasure of food and the rich culture of eating, preserving, and growing food–the joy of sustaining ourselves and doing it well, simply.

I buy a lot of organic lemons and limes, and they’re certainly not local in Oregon. I’m not a stickler for local—I buy salt and chocolate and lots of things.

What are you currently reading (books and/or blogs)?

I read Raj Patel’s blog and find it interesting. I have American Wasteland sitting here that I’m about to start, by Jonathan Bloom. I have Oran Hesterman’s Fair Food that I’m part way through. I’ve been reading Paul Kingsnorth, a British guy who is fairly fringe-y, and focuses on the bigger picture of climate and where we’re headed and what to do as citizens. And Cooking in the Moment by Andrea Reusing and Afro-Vegan by Bryant Terry—they’re cookbooks, but they’re great ones. I’ve also been reading the 2013 Slow Food Almanac, which has so many fascinating, short articles.

It would have beans and greens, good olive oil, herbs. And a slice of cornbread. It would end with a chocolate chip cookie.