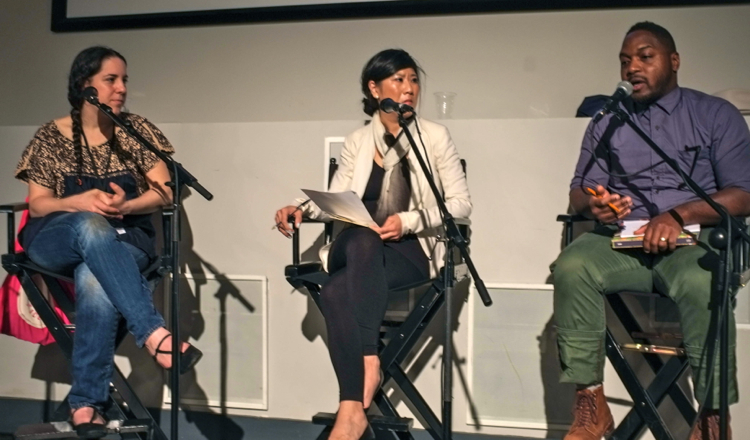 Are race and ethnicity the third rails of the food movement? At last month’s Food Book Fair in New York City, I moderated a panel discussion with a group of activists and chefs who strive to put race and ethnicity at the center of our conversations about food. The panelists included Bryant Terry, author of Afro-Vegan; Colleen Vincent, manager of house marketing & reservations at the James Beard Foundation; Jonathan Wu, chef and owner of NYC’s Fung Tu; and Fany Gerson, chef and owner of La Newyorkina. Throughout the discussion, the panelists unpacked some of the complicated social, economic, and cultural ramifications that race has on the food system.

“Is race really a problem in food?” I asked the panel. I posed this question to emphasize that, on one hand, food allows us celebrate our nation’s cultural and racial diversity. On the other hand, there are numerous racial and class-based social justice issues that plague the food system. The panelists all agreed that food carries deep symbolism within their respective racial and ethnic communities, but Terry struck at the heart of the discussion: “If we care about food, we have to be engaged in the political issue of food.”

Vincent agreed, noting that “racism is a problem in food…in that there’s a disconnect between the people who make and serve our food and the people judging what [those people] are worth.” This disconnect has been at the center of on-going campaigns across the country to improve wages and working conditions in the food service industry, which is disproportionately comprised of people of color and immigrants.

While important, simply focusing on stagnant wages isn’t enough to address the lack of upward mobility that often keeps people of color in the lowest-paying jobs in the food industry. As Vincent argued, “success in restaurants in not just an issue of money, but also [of] appropriate paths to [that] success.” She suggested that in addition to wage increases, restaurants should also provide ample skills trainings and career development opportunities for workers.

Immigration is also a sticking point at the intersection of food and labor. According to Gerson, the lack of a pathway to legal immigration for food industry workers is both a social justice issue and a significant hurdle for business owners. “I spend a lot of time training my workers and I lose that when I can’t have their visas extended,” Gerson noted, pointing out the underlying loss of human capital at the root of the immigration debate.

Terry also commented on the structural lack of access to food across many communities of color. “The social justice movement would be remiss if it didn’t address food access,” he argued. Echoing Vincent, Terry underscored the importance of shifting more power and resources directly to people in communities with limited access to healthy food, particularly to people of color: “If the goal isn’t ensuring that the people in the community are eventually the program directors and [executive directors]…it’s just poverty pimping or part of the not-for-profit industrial complex.”

The issue of co-optation from communities of color comes in other forms, particularly in regard to the cultural ownership of various food traditions. For example, Terry argued, “vegetarianism did not start with Peter Singer. There’s been a history of 20th Century vegetarianism like Seventh Day Adventists, the Nation of Islam, and Dick Gregory.” In Terry’s view, cookbooks can help people of color reclaim diverse food heritages that have been lost to industrialization. Cookbooks based on cultural food traditions can also rectify a host of lifestyle related illnesses that disproportionately affect people of color.

Gerson and Wu also emphasized the economic effects of co-optation. Using the example of high-end Italian cuisine, Gerson called attention to the discrepancies in public expectations of price for various types of ethnic foods: “If you go to a Mario Batali restaurant, it seems okay to charge $30 for an entrée or a pasta, but when you charge $30 for a plate of molé, people complain.” Wu pushed this argument further, saying that much of the cost of his food is tied to better ingredients, labor, and innovative gastronomy—exactly what other people would pay for in other high-end restaurants.

Ultimately, the panelists emphasized the dichotomy I posed at the beginning of the discussion: Food both allows us to celebrate rich cultural traditions and points to on-going racial and ethnic disparities. Despite the myriad problems at the intersection of race and ethnicity within the food system, Terry argued that food is still a powerful tool to change the status quo: “Food brings everyone to the table … and even the simple act of cooking can be deeply political.” And maybe that simple act gives hope for a more racially just food system for all.

Evelyn Kim is a writer based in Copenhagen specializing in food, science and history. She has been mentioned in and has written for several publications, including the New York Times, The Atlantic and Scientific American. Currently she is working on a project with the New York Academy of Medicine on the relationship between food, medicine, and society. Read more >