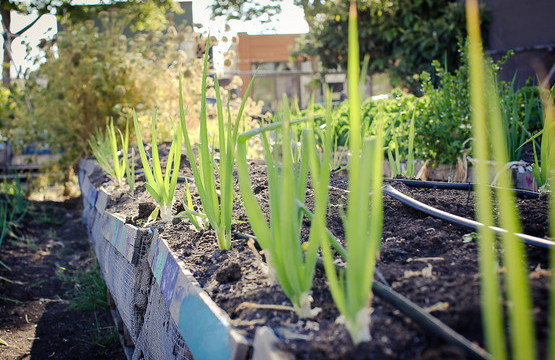 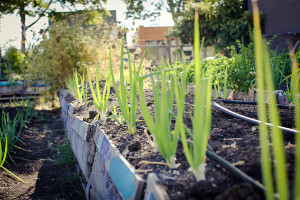 Berkeley’s Urban Adamah*, a city farm with a faith-based focus, is putting down permanent roots. This Jewish-led, organic operation began on a 1.2-acre vacant lot thanks to a temporary, rent-free lease, as we reported shortly after it opened to the public back in the summer of 2011.

Unsure of how long the farm could stay, or whether it would resonate with the community, Urban Adamah has had a pop-up feel. Everything on the property is moveable at short notice: Crops are grown in above-ground, portable pallet boxes, the chicken coops are on wheels, classes are held in tents, even the greenhouses can be easily dismantled and transported.

But not for much longer. In an impressive fundraising effort, the farm raised enough money to purchase a $2.1 million 2.2-acre parcel of vacant land that abuts a restored creek habitat not far from its current location. A cheery red sign that reads “Future Home of Urban Adamah,” provides the only clue to what’s to come.

This most urban of endangered species–a large, undeveloped tract–was formerly owned by the U.S. Postal Service. For now, the fenced-off area is just a weed-filled plot with potential since the sale went through in December. But given the existing farm, brighter food-filled days are ahead for the vacant space. The current farm boasts abundant greens, egg-laying chickens, milk-producing goats, and a budding aquaponics program, using fish to fertilize greens and help grow food in confined spaces.

Urban Adamah is Executive Director Adam Berman’s baby. A UC Berkeley graduate (he has an MBA from the Haas School of Business) he named the farm for the Hebrew word for earth, adamah. The root word, adam, means human. “I like that the name makes the connection between earth and earthlings,” says Berman. 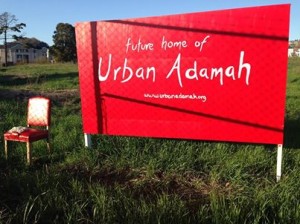 Urban Adamah is more, though, than a food-producing farm. And that may well play a key role in the organization’s success. At a time when questions have been raised around whether urban ag can ever make economic sense or provide a significant source of sustenance, Urban Adamah integrates Jewish traditions and spiritual practices, environmental stewardship, and social justice outreach. At its core, the organization is a place to learn, teach, and connect. And that seems to resonate with funders and community members alike.

Berman still has a ton of money to raise for the new site. Since announcing its $5 million capital campaign, the group has brought in more than $2.8 million. The additional funds are slated to pay for basic infrastructure, a large tented area for classes and programs, a kitchen, dining tent, and a farm stand. Over time, Berman wants to build on-site housing for fellows, who currently live two blocks away from the existing farm, as well as an administrative building and a café. If all goes according to plan, the farm is slated to relocate this winter.

Berman is confident the money will come, in light of Urban Adamah’s track record. He is taking a brief respite from fundraising to work with his staff and a team of designers to create a blueprint for their permanent home. “We have a design that was a first stab at what things could look like. Now we’re about a month away from something that’s much more detailed,” he says. “It’s easier for me to make the case for what we’re doing when I have something tangible to show people.”

Once the new space is completely built—a process Berman says could take several years—the farm could increase its food production five-fold to 50,000 pounds of produce. That’s a lot of nutritious fruits and vegetables for hungry people in need.

“Urban Adamah has a very clear mission and program,” says Rosenthal. “Defining and staying on mission so people can really see and understand what you’re doing is key. They want to know that something they fund or participate in will work and Urban Adamah works.”

00 pounds of produce and gave most of it away to low-income residents for free. This year, the figure is likely to be about 18,000 pounds of farm fresh grub distributed via food banks and their weekly farm stand. The first year, Urban Adamah’s summer camp program served some 30 kids, this year the number is closer to 300.

In its three-month fellowship program for young adults, it has trained around 80 fellows; some have gone on to work for environmental education programs, organic farms or Jewish service organizations. Thousands of community members have attended urban ag workshops and Jewish celebrations at the farm.

Rosenthal is jazzed to join a large-scale urban farm and mentor young farm fellows. One of the biggest lessons of farming, she says, is not being afraid to fail, which is par for the course when at the whim of Mother Nature. She’s excited about the prospect of growing food, particularly fruit trees, directly in soil that has so far tested free of toxic contaminants. And that’s not all. “Farming has always been a spiritual practice for me; at times I’ve felt a little lonely in the politicized atmosphere of urban farming with a social justice focus,” she says. “I like how the spiritual, practical, and food security aspects all come together here. There’s a good balance of production and process, too.”

Not everything the farm has tried has turned to gold. A worm composting business didn’t pan out. But it proved no great loss of time or money and the worm castings will continue to fertilize the farm’s soil for years to come. Berman says he and his fellow growers learned from the experience, which every farmer can relate to, urban or otherwise.

Berman’s vision has its share of fans. “Many of us are still searching for a Jewish community, place, and context that holds more meaning for us than services in a traditional house of prayer,” says Corey Block, an Urban Adamah board member whose family fund donated to the farm’s capital campaign. Block works as the urban farm coordinator in a culinary program at Treasure Island Jobs Corp Center.

Urban Adamah fills this void, she adds, calling it a “new Jewish gathering space; a farm that serves as a synagogue, community center, and kitchen; opens dialogues about food insecurity; and allows for personal and spiritual growth through community volunteerism and collaborative farming.”

Reaching out to youth is crucial to community elders. “Urban Adamah has been very successful at capturing the interest of young people because of their green passion and they’ve been able to transfer that passion to Jewish ‘literacy,’” says Noah Alper, the founder and former owner of Noah’s Bagels, who donated $18,000 to the cause. “Keeping the next generation engaged in Jewish life is a passion of mine.”

Berman is pragmatic about the role his organization plays in addressing food security. And he doesn’t kid himself that urban farms are the answer to this country’s troubled food system. “We will never grow enough food sustainably in our cities to meet global demand,” he says.

But urban farms do more than that, in Berman’s world view. “They are educational and inspirational hubs, places for community gathering and building, and centers for connection to self, others and the natural world. These are our goals.”

Photo of onions growing at Urban Adamah by Laura Turbow. Photo of the farm’s new sign by Kat Morgan.