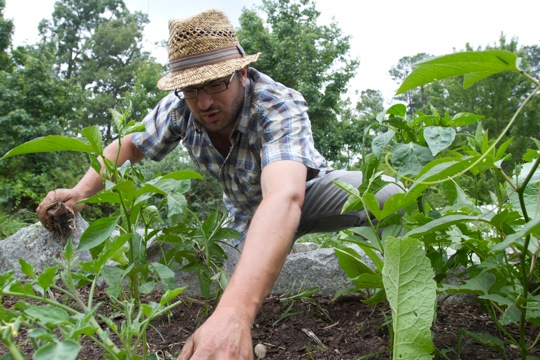 When Daron Joffe dropped out of college to become an organic farmer, his parents cheered him on. “Okay, Farmer D, let’s see where this goes,” his mom said. He apprenticed on several organic farms in the Midwest, picked up biodynamic farming from Hugh Lovel at the Union Agriculture Institute, and eventually bought a 175-acre farm in Wisconsin where he launched a successful community supported agriculture (CSA) program. After several stints in the nonprofit world, Joffe was asked to help design and run an organic farm at one of the first “agrihoods” in the country, Serenbe. A planned community built around an organic farm, Serenbe was the beginning of Joffe’s career as an “entre-manure.”

Appropriating his mom’s nickname, Joffe branded himself Farmer D and launched a farm consulting business as well as a line of biodynamic compost. Eventually, he opened a gardening supply shop in Atlanta, where he still sells compost, gardening tools, seeds, plants, and raised beds. In his new memoir/farming guidebook, Citizen Farmers: the Biodynamic Way to Grow Healthy Food, Build Thriving Communities, and Give Back to the Earth, he tells his story and shares his passion for social justice. We talked to Joffe recently about beginning farm finances, biodynamics, and how to get more fresh produce into under-resourced areas.

How do you define a “citizen farmer”?

Essentially anyone who is committed in some way to improving our food system and the health of our planet through action. You can be a citizen farmer from a classroom, a kitchen, a board room, or the mayor’s office.

You left your own farm in Wisconsin because you wanted to raise awareness about biodynamic agriculture among the masses. How did you go from being a farmer to a farmer-activist?

I loved the CSA model—the farm as a platform for education and community building. But I felt that I wasn’t going to be able to make a big enough impact on my farm. And so, my first inclination was “I need to be more urban.” So I bought a food truck in Madison—it was a farm-to-table food truck (the falafel had heirloom tomatoes and fresh arugula from my farm)—and started doing more urban gardening. That kind of reinforced for me: [Cities] are where change needs to happen. I thought, “I’m going to sell the farm, and come back to farming later in life. But I need to devote this energetic time of life in communities that need it.”

After working at a few nonprofits, you found yourself becoming what you call an “entre-manure.” How did that transformation come about?

I had had this idea for years, of bringing the farm into the Jewish summer camp environment. It would be a way to get better food into the cafeteria, get kids connected to the environment and farming. I presented this idea to a Jewish Community Center, near where I was going to school in Georgia, and I managed to raise the money and build this garden that’s still there. It was a huge success.

One day, this development person from the JCC asked me to apply for a social entrepreneurship grant called the Joshua Venture Fellowship. It’s a two-year fellowship and they pick eight people from around the country. I got it. They gave me a mentor who was this guru of nonprofits. I sat down and had coffee with him. I said, “Here’s what I do: I design and build these gardens, train somebody to run them, and then I check in on them and then I’m done.”

And he said, “That sounds like a business. Why are you doing it as a nonprofit?”

I didn’t even realize it, but for those few years, I had been building my consulting expertise. When I got the opportunity to work at Serenbe, just southwest of Atlanta, I’d been doing it already.

Was Serenbe the first of these so-called “agrihoods”—planned communities built around a farm?

It was one of the first. There was Prairie Crossing, and a few really small things had happened—co-housing communities with small farms. But Serenbe was the first that had clustered, hamlet-style villages around a farm. It was also the first on this scale.

Though you’ve worked as a consultant on private developments around the country, you’ve kept doing pro bono work, building farms and gardens for homeless shelters, youth prisons, and boys & girls clubs.  Is that part of your company’s mission?

My bread and butter clients are big developments and high-end resorts and I take on as much of the discounted nonprofit stuff that I can afford. I’m in a position now, in my new role [as ranch development director] at the Leichtag Foundation, where that’s more my core. 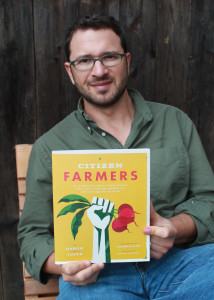 The other day, I got an e-mail from an agroecology professor I worked for at the University of Georgia-Athens, to whom I’d sent a copy of the book. He wrote a wonderful review of the book and at the end of it he said, “I only have one criticism: The biodynamic subtitle. Organic agriculture has been scientifically proven and accepted by scientists. But biodynamic remains in the realm of superstition. It may be proven someday, but why not just call it the ‘organic way to grow healthy food?’”

And I can appreciate that. But last night I had a drink with a good friend of mine, who said, “I love that you have biodynamic on the cover of this book!”

So it’s important to shine a light on this; it has been a big part of my experience with agriculture. It brings a spiritual approach that I relate to; organics doesn’t necessarily have that component. From the science perspective, sure, organic agriculture is more developed and scientifically proven. But I’ve seen biodynamics in practice and I’ve seen it work. The book is not all about biodynamics, but my goal was to demystify it a bit, and show that it can be effective.

The latest Agriculture Census data shows that over half of America’s farmers don’t call farming their primary occupation—presumably because they can’t make enough money. What financial advice would you give young farmers?

Most farmers already know this: It’s a labor-of-love career. The quality of life is the richness that you get. My advice is to [prioritize] good planning, good management, delegate, and engage your customers so that they can participate as much as possible. Building a good team is key. And having somebody in the family that has a stable job is always a good thing! Farming is fickle, and you never know. So, have another creative revenue stream that’s not as dependent on the crop harvest–whether that’s something you do collectively as a family or via events, cooking, consulting, or whatever.

Find opportunities that can relieve some of the financial burden or provide you with stability. If you can work within an existing infrastructure—whether that’s an incubator or an existing agricultural or land trust operation where you could share equipment.

The last thing I would say is do a CSA. It provides you with low-risk seed capital.

Are there other entre-manurial ways of making a living as a farmer?

There are more and more farm management and educator roles out there. Universities are starting farms, and so are developers, nonprofits—even cities. And there are some ways to save money with government programs—subsidizing organic certification, or putting land into conservation easement to reduce taxes.

Where can farmers learn more about these programs?

You went to 13 banks before you found one that would secure you a loan. Any tips?

Today there are beginning farmer loans through the FSA (Farm Service Agency at the USDA), but there weren’t at the time. A lot of the banks just looked at my crop list and their eyes rolled back. “You’re not doing corn and soybeans?” They just did not understand it. There is a lot more support from social venture type funds now. Slow Money, for example. And lot of starter farms are being funded by angels–wealthy people who are passionate about this.

Aside from donating extra produce to the local food bank, what can citizen farmers do to get more healthy food into low-income neighborhoods?

Encourage vegetable gardening, especially in neighborhoods that lack access and resources. Some CSAs offer programs where you can sponsor a CSA share for a family in need. Advocate to local government, business, and community leaders about how important it is to get fresh food into low-income communities, schools, and shelters and support local sustainable agriculture.

Why did you decide to write a book?

I’ve always had a really hard time explaining what I do.  So the book has been a good way to express my philosophy, my motivation, and my goals. My driving passion has always been to raise awareness and make change on a big scale; a book seemed like a great way to do that.

Photo at the top by Rinne Allen.