'Farmland' Fables: What the Documentary Gets Wrong | Civil Eats

‘Farmland’ Fables: What the Documentary Gets Wrong 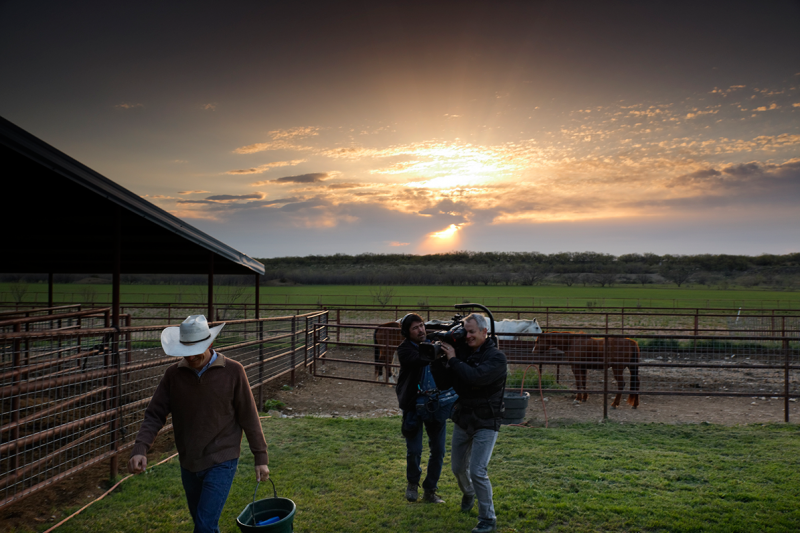 The promotional website for the new film Farmland invites viewers to “step inside the world of farming for a first-hand glimpse into the lives of young farmers and ranchers.” The film, which opens in some theaters May 1, features six young farmers from across the U.S.

But let’s make this very clear: Farmland is funded by the U.S. Farmers and Ranchers Alliance (USFRA), a trade association uniting industry representatives from groups such as the National Cattlemen’s Beef Association and the United Soybean Board, state farm bureaus, and the agribusiness corporations Monsanto, DuPont Pioneer, and John Deere. This fact​ alone​​ suggests that it’s not the straightforward look at today’s farmers that it portrays itself to be.

The film combines interviews with scenes from their day-to-day lives, and it does a very credible job of capturing the trials and aspirations of ​a corn and soy farmer, a hog farmer, a chicken farmer, a cattle rancher, and two vegetable farmers—one large organic producer and one small CSA (community-supported agriculture) farmer. They are all passionate advocates of their farming operation and methods and all six spoke of​ the problems of growing crops, particularly the really tight margins affecting farmers.

I suppose one could say they covered a fair cross section of farming operations across the U.S., but they did, however, miss bringing ​​dairy farming, urban farming, and minority farmers into the picture entirely. From my point of view as a farmer, Farmland also left out a lot of the problems we face and glorified the trend toward larger, more industrialized farms.

When I heard the stirring, almost patriotic music I knew a giant corn planter would soon be rolling across the Nebraska landscape for a moonlit planting run. From there the viewer goes to Georgia, where a group of school children are looking into a barn housing 25,000 chickens, one of 18 such barns on the farm, to which 450,000 chicks are delivered at a time, five times every year.

The Nebraska corn and soy farmer tells the audience that he has irrigated twice as much in 2012 as he does in a normal year, but we never hear him question the sustainability of irrigating what should be dry land farm country.

The hog farmer from Minnesota shows the construction for an expansion of their facilities, but he never questions why the global market he is part of is not providing a fair return for his work, one that would not necessitate constant expansion.

And the rancher from Texas asks, “Is there really any difference between organic and natural?” as a swirling collage of labels filled the screen, enforcing the idea that labels are more confusing than they are helpful.

The commercial organic grower in California seems to rely heavily on his Latino employees and I hope they were fairly paid. While he clearly feels organic is a better way to farm, his choices appear to be lead more by economic factors than ethical ones. His farming plan is to try to stay one step ahead of the market at all times.

Finally, the young CSA farmer from the appropriately named One Woman Farm, in Pennsylvania, shows real joy in growing food, not commodities. She is the only one who directly connects with people who eat what she grows. New to farming, she is the token woman and a token small-scale operator. And, as the film suggests, she may provide food for several households, but she alone (or others like her) will never “feed the world.”

No, for that important work—Farmland tells us—one needs a much larger operation, and new technology: GPS, auto-steer tractors, genetically engineered seeds (commonly referred to as GMOs), confinement-based animal production (or CAFOs). This is a common refrain from USFRA, which was founded in 2011.

The group has hosted events called Food Dialogues and produced media to respond to other food films, such Food, Inc., King Corn, and criticism aimed at revealing what many consumers see as the downsides to heavily consolidated agriculture. (The USFRA receives federal commodity marketing program dollars, or check-offs, paid for by growers of various commodities who contribute through product sales whether they want to or not.)

Indeed, the phrase “feeding the world” has become an opiate that lulls farmers and consumers into accepting the system of commodity production, high-tech farming and the notion that “food is food,” no matter how it’s grown or harvested.

GMOs are a good example. In Farmland, they are described as offering farmers all sorts of benefits that haven’t lived up to their hype: Weed control options, insect resistance, higher yields, drought resistance, and better nutrition. On the other hand, the film’s two organic farmers were never shown criticizing the farmers who use GMO seeds, and, in my opinion, that is how it should be. Industry is the one and only winner when it comes to GMOs.

Like them, my criticism is not of these young farmers. It’s not an easy job and most of us take on huge financial risks while the multinational corporations controlling agriculture will make a profit, no matter what happens to our bottom line. Thanks to climate change, free trade agreements, and consolidation, all our futures are uncertain.

But the system, and the corporate control was never questioned—that is what I found missing from Farmland: Someone seriously asking questions about this “get big or get out” food system. I would have liked to see someone ask why hunger continues to grow as farmers adopt all the technology that industry, government, universities, and media tell them they should.

And finally: Why must small and medium-sized farmers struggle financially while the agribusiness industries see their profit margins climb?

Photo at the top by Don Holtz.