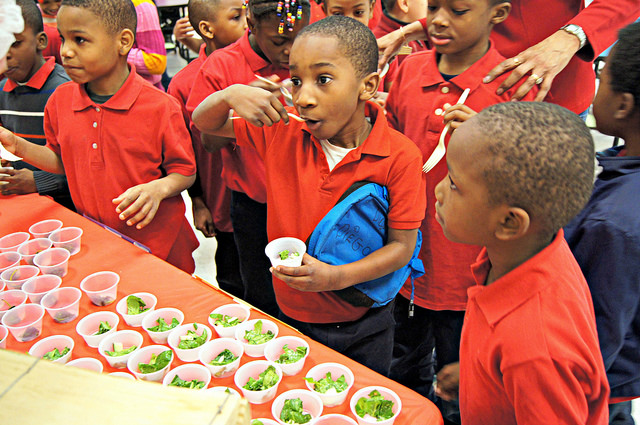 At first glance, the 2014 Farm Bill may look like business as usual. But there is also some good news for local food advocates buried deep in the $956 billion bill, and a new pilot program that promises to place more local produce in schools is worth applauding.

Starting next school year, these programs would provide local fruit and vegetables for at least five, and up to eight, pilot schools across the country, with at least one state in each of the five main regions of the country (the Northeast, the Pacific Northwest, the South, the West, and the Midwest). (The U.S. Department of Agriculture (USDA) is expected to release a Request for Proposals (RFP) in the coming months.)

Although the pilot programs do not have any mandatory funding attached to them, USDA expects to be able to move forward with the implementation of the programs without any additional funding.

The new program carries forward another pilot that took place in 2011, in Michigan and Florida schools, where USDA purchased local lettuce, apples, grapes, oranges, carrots, and blueberries, and funneled them to schools through the state.

Although non-governmental (non-profit and school-based) farm-to-school programs have existed in several states throughout the country for many years, and a large number of states have passed farm-to-school legislation, the USDA program is essentially the first federally backed investment supporting the inclusion of local fruits and vegetables for school breakfast, lunch, and snack programs.

In terms of federal legislation, farm-to-school has been part of the Child Nutrition Act since 2004, and in 2010, USDA received funding to administer the Farm to School Grant Program. Now the Farm Bill also includes explicit language in support of farm-to-school. Ideally, say advocates, this will makes it easier for schools to be flexible in what they can serve their students, and support accompanying food and nutrition education.

Along with school gardens and food systems education, the National Farm to School Network’s (NFSN) Policy and Strategic Partnerships Director Helen Dombalis says “local procurement is the third key piece of farm-to-school.” NFSN advocated for the pilots along with National Sustainable Agriculture Coalition (NSAC) and Dombalis sees them as an important start.

Eugene Kim, a Policy Specialist at NSAC, described the pilots as “a great opportunity to encourage diversity and innovation in farm-to-school,” and a “chance for schools and states to learn from successes and failures.”

By reconnecting young people to their food and giving them access to more fresh fruits and vegetables, farm-to-school programming is known to generate an increased interest in and willingness to try healthy foods.

There is also ample science showing that foods that are consumed closer to their source generally contain a higher nutrient value. And small, localized farms to tend to favor taste, nutrition, and diversity over maximum yield and “shipability” when choosing varieties.

Sourcing fresh, local food for school lunches carries with it the added benefit of contributing to the local economy and supporting local farmers. In one economic analysis, Cooperative Extension in Minnesota found that farmers were positively impacted by selling their produce to schools, regardless of how much the schools were willing to pay for the products, simply because the school system presented a new market.

A Modest Program With Great Potential

In their recommendations to USDA, NFSN, and NSAC make a purposeful attempt to engage beginning and socially disadvantaged farmers (defined as those whose identity in a group has subjected them to racial or ethnic prejudice without regard to their individual identity) in the farm-to-school movement.

USDA also has the opportunity to provide training and technical assistance for school food representatives and farmers.  As with anything in the world of food, both the supply and demand end of the equation must be addressed. USDA has the opportunity to craft resources that both encourage farmers to participate in farm-to-school programs and to provide schools with the tools necessary to purchase, process, and serve food that comes directly from farms (versus pre-prepared foods that merely need to be reheated).

These new pilots might also open the door for USDA to consider a nuanced food safety regimen when it comes to school food that is scale-appropriate and practical for schools and for farmers. In most cases, farms that sell to schools must be certified through Good Agriculture Practices (GAP), or similar state run food safety regimen. This often poses a barrier to getting fresher, local foods into schools

In the meantime, advocates can celebrate a small win with big potential. Dombalis says,  “We are excited that … USDA will be exploring alternative procurement models for local produce. The lessons learned will inform the future expansion of farm-to-school, ultimately resulting in more wins for kids, farmers, and communities.”