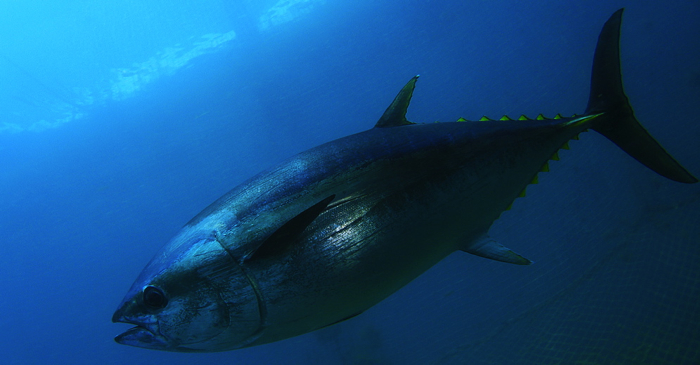 For years, Atlantic bluefin tuna has been the very definition of the seafood red list. And the decision by the high-end restaurant Nobu to continue selling the sought-after, but threatened delicacy has received a great deal of criticism from activists and celebrities alike. (It’s also on Barry Estabrook’s Five Things I Will Not Eat list.)

But even more surprising than one restaurant’s decision to flaunt a bad ecological choice, is the many pounds of bluefin that are currently going to waste in the Gulf of Mexico.

Travelling at speeds of 25 miles per hour, and diving 4,000 feet at a time, these ultra-streamlined, muscular fish are in a class by themselves. And, thanks to demand for honmaguro sashimi in Japan, bluefin is both wildly expensive and badly threatened. (In the case of the Western Atlantic bluefin, stocks have declined by 64 percent since 1970.)

In other words, it’s an incredibly precious food. And yet, says Thomas Wheatley, an oceans campaigner at the Pew Charitable Trusts, bluefin bycatch often goes overboard–to the order of 202 metric tons in 2012 alone. That’s a lot of sashimi.

“Essentially there’s waste written into the regulations,” says Wheatley, who has been working to raise awareness about this loophole for several years.

Every Spring, after traversing most of the Atlantic Ocean, the Western Atlantic bluefin returns to the Gulf, the only place they are known to spawn. Technically, it’s illegal to catch bluefin, but fishermen put down longlines, which catch many fish at a time on baited hooks arranged at intervals along a single line. And the results are disastrous for bluefin stocks.

“They’re inadvertently catching bluefin with longlines, while trying to catch yellowfin and swordfish,” says Wheatley. “But they can only keep three bluefin–beyond that, if it comes up dead, they have to throw it overboard.”

According to Shana Miller, the Global Tuna Conservation Project director at the Ocean Foundation and an adviser to Pew, “Over 20 percent of U.S. tuna mortality in 2012 was discards.” But that number doesn’t include the fish released alive (many of whom Miller says will soon die anyway). This takes place within a population of only around 40,000 adult fish.

“Forty thousand sounds like a lot,” adds Miller, “but when you think about the entire North Atlantic, it’s nothing.”

The National Oceanic and Atmospheric Administration, or NOAA, proposed draft regulations last August that could help stop the waste. For one, they’ve proposed that fishermen would be prohibited from using surface longlines from April through May in the northwest part of the Gulf.

That would be a start, says Pew. But Wheatley and others would like to see a ban on the gear throughout the entire Gulf during that time of year, as well as a shift toward more selective gear called greensticks, and more oversight of the longline fleet in the Gulf, which puts down around 30 miles of hooked lines at a time.

“NOAA knows that for fish as valuable as the bluefin, both to the ecosystem as well as the economy, to be wasted at all, is insane,” says Miller.

Even some of these proposed changes could give tuna in the Gulf a leg–or fin–up at a time when the fish has also suffered mightily in the wake of the BP oil spill.

A recent study from Stanford University, published in the Proceedings of the National Academy of Sciences (PNAS), found that the nation’s largest oil spill may have harmed young tuna, whose floating larvae came into contact with oil on the surface of the Gulf, resulting in heart problems later in the fishes’ lives.

And while Gulf fishermen could suffer short-term loses under NOAA’s proposed quotas, Wheatley sees it as a necessary, if difficult step. “We believe that if we put the fish first, the fishing communities will benefit in the long run,” he says.