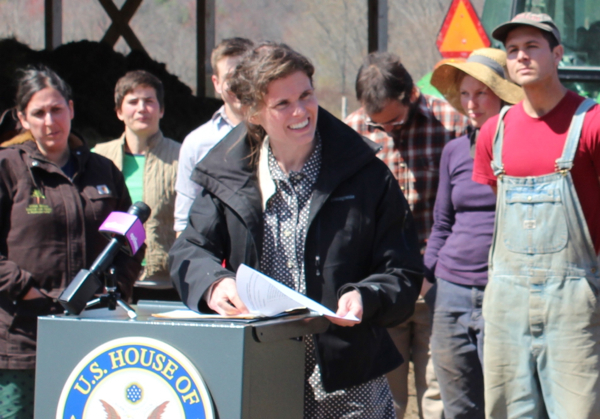 As Executive Director and co-founder of the National Young Farmers Coalition (NYFC), Lindsey Lusher Shute has united thousands of farmer-activists and supporters from all 50 states. NYFC is now in its fifth year of advocating for beginning farmers, helping them overcome significant hurdles.

Shute has a history of agricultural action: Before starting NYFC, she transformed an abandoned lot in Brooklyn into a flourishing community garden. Along with running the Coalition, she and her husband, Ben, are raising two daughters while farming 25 acres of vegetables and managing a flock of laying hens and a dozen pigs on Hearty Roots Community Farm in New York’s Hudson Valley. We talked with Shute about her work.

You founded NYFC in 2010 because you were inspired to help young farmers get access to land. Is that still your primary focus?

Absolutely. Securing affordable land is the most important thing we can do to for future generations. For our market growers, who are looking to farm within a hundred miles of major cities, land prices are being driven up by developers and estate owners. In more rural places, established growers and speculators are bidding up acres well above what new farmers can afford.

Are you still working on student loan forgiveness and affordable healthcare?

With college debt, a farm career is out of the question. There’s just not enough money to be made in those first years to make a living, build a business, and make monthly loan payments. Student debt also makes it more difficult for farmers to get a mortgage, finance a tractor, or borrow to make capital improvements like fencing, irrigation or buildings. As Congress starts talking about tax reform next year, we plan to put loan forgiveness on the table.

As for healthcare, we’re waiting to see how the Affordable Care Act plays out for farmers. It seems to have largely resolved the issue, as young growers can now stay on a family plan longer or get access to coverage on the exchanges. That said, we’ll be checking in with our members in a few months to see if they’re getting the care they need.

Which of NYFC’s accomplishments are you personally most proud?


I’m most proud of the community that we’ve brought together and our strength at the grassroots. We have 29 local chapters in development and dues-paying members in every state. This is the network and muscle that is translating into real change at home, in Congress, and at the U.S. Department of Agriculture (USDA)–and we’re only getting started.

One example of the power of our grassroots network was our response to the U.S. Food & Drug Administration’s (FDA) draft food safety rules last fall. As written, the rules would have jeopardized many of our members’ farms by outlawing time-tested organic animal management practices, cost tens of thousands of dollars in compliance costs, and made it difficult for farms to work together.

Through NYFC’s national network, we organized 70 letter-writing parties in 30 states and generated over a thousand unique comments to FDA about how the rules would hurt beginning farmers. Not only were we able to help fill the agency’s inbox, but we presented perspectives from growers in every region of the country.  The FDA announced in December that it was planning to make “significant changes” to the rules, which was a real victory for the movement and NYFC.

What are the benefits and challenges of having a coalition with a national scope?

The benefit is that we can get work done in Congress and at the USDA. In our meetings in D.C., the first question we get is: “In how many states do you have members?” Because we have members in every state and we work on issues that affect all of them, we’ve been able to get a lot of traction. It’s also pretty great that we can invite members of Congress to see the farms that young people are building in their own districts. That’s how we helped win bipartisan support for many of our farm bill initiatives, by proving that the programs we support help farmers in every region.

The challenge to having a national coalition is that there’s only so much that the federal government can do to help farmers. Many of challenges faced by farmers must be solved at the local and state levels–and we live in a very big country.

Can you say more about the recent wins in the 2014 farm bill for young farmers?

One example is our success with the Beginning Farmer and Rancher Opportunity Act, a bill we worked on with the National Sustainable Agriculture Coalition. This legislation, which contained all the funding and rule changes that we wanted in the Farm Bill, was supported by dozens of Democrats and one Republican in the House. To broaden support for the bill, we helped our Hudson Valley chapter organize a regional farmers’ forum.

The event brought together over a hundred farmers from the district of Representative Chris Gibson to talk about the challenges that they were facing on their farms. Inspired by the stories, Representative Gibson became the second Republican sponsor and an outspoken champion for beginning farmers. NYFC helped farmers organize similar forums in Colorado and New Mexico.

I imagine the internet is key to organizing your network of activists. But farmers aren’t sitting in front of computers all day like some of us. How do you accommodate the farming lifestyle and schedule?

It’s tough to reach our network in the peak growing season when many farmers are working sunup to sundown. The strategy that’s working for us is to be sure that our communications are direct, helpful, and important to the community. We don’t want to waste anyone’s time.

What are the hurdles facing beginning farmers that, like the Farm Service Agency’s (pre-collaboration) Farm Storage Facility Loan program, are examples of well-meaning programs that are impractically and inefficiently implemented?

Well, that characterizes a lot of government programs! But to answer your question, I’d say crop insurance. I spoke to a farmer friend this morning who lost all of her peaches and apples to a late spring frost. And although Congress just passed a Farm Bill that will spend $90 billion on crop insurance subsidies, there are still no insurance programs that work for diversified and organic growers like her. That’s a big problem.

The young farmers benefits from more public awareness and more readily available resources than you and Ben did when established Hearty Roots Community Farm. Are there new challenges that didn’t exist when you were beginning farmers?

That’s a great question. The core issues of land and capital are the same, but some regions are becoming more saturated with farmers markets and CSAs. This is good news, of course, but the availability of local food doesn’t mean that there’s an immediate market for it. Where there are a lot of local producers, it’s really important that they work together to build demand and diversify their products.

Do you wish for a farming future for your daughters, in the tradition of multi-generational farms?

We would be very proud of our daughters if they chose to farm for a living. It’s common for parents to hope that their children’s success will eclipse their own accomplishments. Some narrowly take that to mean getting out of agriculture to become doctors or lawyers. But who needs to move to the city when there are endless opportunities for great achievement right on the farm? Our kids would have the power to build community, improve the ecosystem, generate economic activity, and innovate agricultural practices in ways that could shift the course of global agriculture. There are big and exciting challenges right here in rural America.

Besides joining NYFC, how can readers support or be involved with the young farmers movement? What can we do in our everyday actions?

Joining a CSA is a great start, as is shopping at a local farmers market. Readers can also become farmers, as we still need hundreds of thousands more!

Janice Huang is a writer, recipe developer, and editor. Her work has appeared in Natural Health and Food & Wine. She has an M.A. in Food Studies from New York University. Janice lives on Bainbridge Island, WA. Read more >