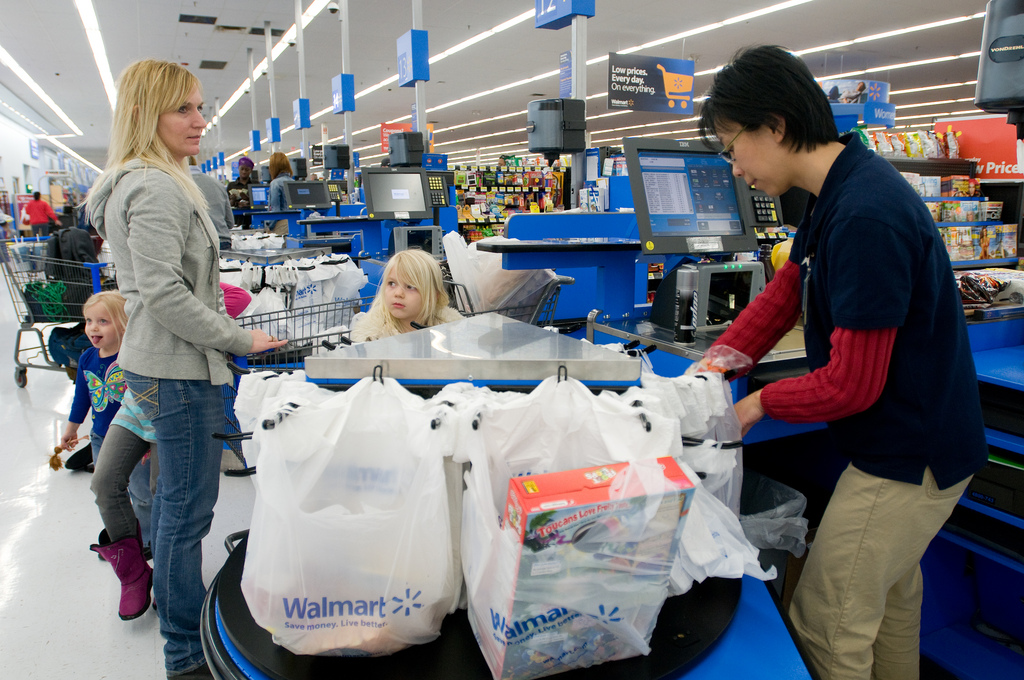 Wal-Mart announced last week that it will soon start partnering with Wild Oats to sell organic pantry items like tomato paste and broth at prices as low as 25 percent below other name-brand organic products. What could be wrong with that? In the short term, probably nothing. But in the long term, it could ultimately enable the mega-retailer to dominate the organic market the way it dominates whole swaths of the retail economy, from razor blades to recycling bins.

Wild Oats was once the No. 2 retailer of organic and natural foods. It’s been five years since its failed merger with Whole Foods, and the Wal-Mart announcement signaled the brand’s return, but without its own stores.

Wal-Mart might have made its announcement sooner than it had planned, possibly in response to Target’s announcement a few days earlier that it is expanding its organic offerings (though not it’s own line).

“If Wal-Mart decides to apply its logistical prowess to organic foods, it’s probably a win-win,” says Mark Kastel, a co-founder of the Cornucopia Institute, and the director of that organization’s Organic Integrity Project. “But if the company ‘Wal-Marts’ organics, probably not.”

That happens a lot with Wal-Mart. Just ask the people who used to run Gillette, which was forced into a takeover by Proctor & Gamble largely because of the severe dictates and price demands of Wal-Mart. This is often the case within Wal-Mart’s supply chain, including food, where Wal-Mart is the dominant retailer, responsible for about 30 percent of U.S. food sales. (For example, Kraft and Coca-Cola have both suffered mightily under Wal-Mart’s grip.)

There’s no question that the new offerings will in many ways be good for consumers. Wal-Mart shoppers in particular tend to live in suburban and exurban areas where demand for organic foods is growing, as it is everywhere.” And the food will be cheap. According to the Washington Post, “a 32-ounce can of chicken broth under Wild Oats is priced at $1.98, compared with the $3.47 for a national-brand alternative.”

Also, if Wal-Mart continues to expand into organics, there will be more incentive to devote more farmland and more processing facilities to organic products. Bigger companies like Con-Agra and Kraft might invest more in organic foods, and, the theory goes, costs would come down. The use of pesticides could also fall overall and more GMO-free foods might come on the market (certified organic food can’t contain GMOs).

But there are also a lot of potential problems.

Wal-Mart is not shy about its intentions. “We are removing the premium associated with organic groceries,” Jack Sinclair, executive vice president of grocery, declared in announcing the initiative last week. “[Shoppers] will be able to buy organic products at nonorganic prices.”

But that doesn’t mean Wal-Mart will be able to remove much if any of the cost of producing organic items, at least not for a long while. So if consumers aren’t paying the organic premium, who is? Farmers and processors. And, ultimately, consumers might end up paying more in the long run as Wal-Mart locks up the supply chain. If there are fewer, but much larger producers of organic food, channeling through Wal-Mart, both they and Wal-Mart will have much more power to set prices than would a market with lots of smaller, competing players.

“For a 1 or 2 percent cost savings, Wal-Mart will dump one supplier in favor of another,” Kastel says. And eventually, that could lead to further consolidation, and further control over the market. That might mean lower quality, as well as an employment market where workers are left with little choice but to work for company whose top priority is always cutting costs.

“Wal-Mart is just too big to be a positive or constructive partner” with its suppliers, says Barry C. Lynn, director of the New America Foundation’s Markets, Enterprise and Resiliency Initiative, and author of the 2010 book Cornered: The New Monopoly Capitalism and the Economics of Destruction.

Wal-Mart “has a visceral dislike of suppliers making money,” says Lynn. That’s how the company is able to offer “Always Low Prices,” but it’s also how it’s able to profit in businesses–like food–with extremely low margins. “For every two pennies they squeeze out of their suppliers, they return one to the customer,” Lynn says. And the effects on those suppliers can be devastating. Wal-Mart might mean well when it enters businesses like “green” products or organic foods, but “what they seek to build, they end up breaking,” he adds.

Until now, it hasn’t been clear how serious Wal-Mart is about the organics market. Its last go-around didn’t turn out so well, as the chain’s generally lower- and middle-income shoppers were turned off by the high prices. But sales of organics are growing faster than sales of conventionally grown foods and Wal-Mart says that 91 percent of its customers have indicated that they will buy organics if the price were right. The company’s food sales have also been slowing in recent years and Wal-Mart sees organics as a way to shore them up.

For now, about 100 Wild Oats-labeled products will be available in about half of Wal-Mart’s approximately 4,000 stores. If this relatively modest initiative goes well, we can expect much more to come.

One big red flag is the fact that the products will be sold under a private label, which, for starters, means nobody will know the true source of ingredients, something that doesn’t really jibe with the traditional notion of organic food. Ingredients might come from places like China and South America, where there has been an increase in land devoted to producing food for USDA organic certification. It might also come from industrial farming operations in the United States that adhere to the letter of the law to earn certification, but might not fit most people’s expectation of “organic” food.

Putting private labels on organic foods doesn’t make sense to Kastel, who says, “organic consumers want to know the stories behind their food.”

Howard identifies another problem with private labels: Once Wild Oats becomes known for organic foods in shoppers minds, Wal-Mart might start selling Wild Oats’ “natural” products (“natural” is a marketing term that means nothing) without consumers knowing the difference. We can’t know whether Wal-Mart has anything like this planned, “but it’s a possibility,” Howard says.

There are several reasons that organics cost more than conventional foods. The main one is that demand is growing while supply is still crimped. That won’t change any time soon, no matter how much Wal-Mart, Target, or others might want to ramp up the availability of organic products. Under the National Organic Program, it takes three years for a conventional farmer to transition to organic. But even after certification is granted, costs are higher. For one, organic requires more labor, which always costs more.

That leads Kastel, himself a onetime organic farmer, to question Wal-Mart’s pricing plans. “I just find it a little challenging to believe that they can do that,” he says.

If the company is serious about those prices, they will lead to consolidation. And it won’t be Wal-Mart taking the losses—it will be farmers, processors, and, ultimately, consumers.