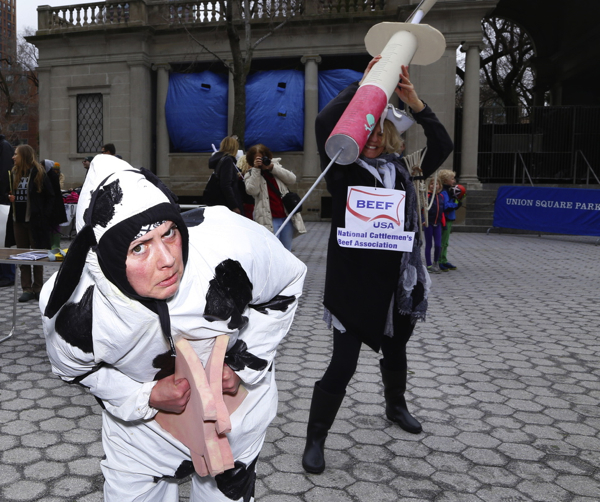 A new national grassroots campaign is aiming to boost awareness of the public health threat of antibiotic overuse in livestock production.

It’s been over a year since Rep. Louise Slaughter (D-NY) introduced the Preservation of Antibiotics for Medical Treatment Act (PAMTA), a bill that would ban the non-therapeutic use of antibiotics in livestock. And it’s been almost 10 months since Dianne Feinstein (D-CA) introduced a similar bill in the Senate. Both bills remain stalled in their respective committees, however.

“The issue [of antibiotic resistance] has been stuck for a long time,” said Patty Lovera, assistant director at the advocacy group Food and Water Watch (FWW), which is spearheading the community-based Campaign to Save Antibiotics. “We still need to have Congress say you can’t use these drugs in this way.”

But rather than appealing directly to Congress, particularly during a midterm election cycle, FWW has set its sights on building local support for the ban of growth promoting (or “nontherapeutic”) antibiotics, a bottom-up grassroots approach that gets more people putting political pressure on members of Congress. To that end, FWW has worked with local elected bodies (city councils, county boards, etc.) in several cities to pass resolutions supporting the passage of both national bills.

The reason behind these proposed bans? Some 80 percent of all antibiotics sold in the U.S. are used in livestock production—expressly to counteract the stressful, confined conditions of concentrated animal feeding operations (CAFOs). The result: Antibiotic resistance of unprecedented proportions.

Last September, the U.S. Centers for Disease Control and Prevention (CDC) published its damning “Threat Report” on antibiotic resistance, a growing public health crisis that CDC experts say is responsible for more than two million illnesses and 23,000 fatalities annually. Simply put, if you get an infection, it may not respond to the antibiotic prescribed by your doctor—or any other antibiotic in his/her medicine chest. Twenty-two percent of all antibiotic-resistant infections come from foodborne pathogens, FWW estimates.

“If we are not careful, we will soon be in a post-antibiotic era,” Dr. Tom Frieden, the CDC’s director, said last year. “And for some patients and for some microbes, we are already there.” Frieden has characterized antibiotic resistance as “one of our most serious health threats.”

The governmental impasse sunk deeper into the proverbial mud, when in December, the U.S. Food & Drug Administration (FDA) issued new guidance on antibiotic use for food animal production. In a carefully worded statement, the agency announced voluntary guidelines for livestock producers and recommended veterinary oversight of antibiotics (as opposed to over-the-counter sales) to livestock operations. But voluntary is just that, as we previously reported: It has little, if any, regulatory teeth.

While headlines such as, “25 Drug Companies to Phase Out Animal Antibiotics” suggest actual change, that message is misleading. While the majority of the companies that produce antibiotics have agreed to phase out some products for non-therapeutic use, there is still a great deal of gray area. In fact, 63 percent of the available antibiotic drugs can be used for multiple purposes, so there is no way to know when a livestock producer is using them to prevent illness or to boost an animal’s growth.

Meanwhile, antibiotic resistance continues to rear its ugly head. Since March 2013, 524 people from 25 states and Puerto Rico have been infected with a multi-drug-resistant strain of Salmonella linked to Foster Farms chicken.

Numbers like these have encouraged lawmakers to get involved at the citywide level. In Seattle, where a resolution unanimously passed last week to support the two bills in Congress, City Councilmember (and resolution sponsor) Mike O’Brien told Civil Eats he was inspired by the cross section of supporters on this issue, from supermarket retailers to pediatricians.

“What really triggered it for me was the organizing in the community,” said O’Brien. “It’s one thing when one person asks to be heard, it’s quite another thing when you have hundreds of people signed onto this. It demonstrates that we have broad community support.”

In addition to Seattle, two other cities—Madison, Wisconsin and St. Paul, Minnesota—adopted similar resolutions just in the past week. Providence, Rhode Island was the first on the books in February, followed by Pittsburgh, Cleveland, and Red Bank, New Jersey. FWW spokesperson Anna Ghosh told Civil Eats that Denver and Alexandria, Virginia are the likely next adopters. The group has created an online map to keep tabs on where campaign momentum is building. (On a related note, the state of California also has two of its own bills on the table, including one that would make the new FDA guidelines mandatory.)

Going local, said FWW’s Lovera, is a great way to make an issue visible on the home front and allow it to ramp up during a midterm election year, when members of Congress tend to be distracted by their own campaigns. With enough steam from the bottom up these bills might just have a fighting chance.

Photo by a katz / Shutterstock.com.