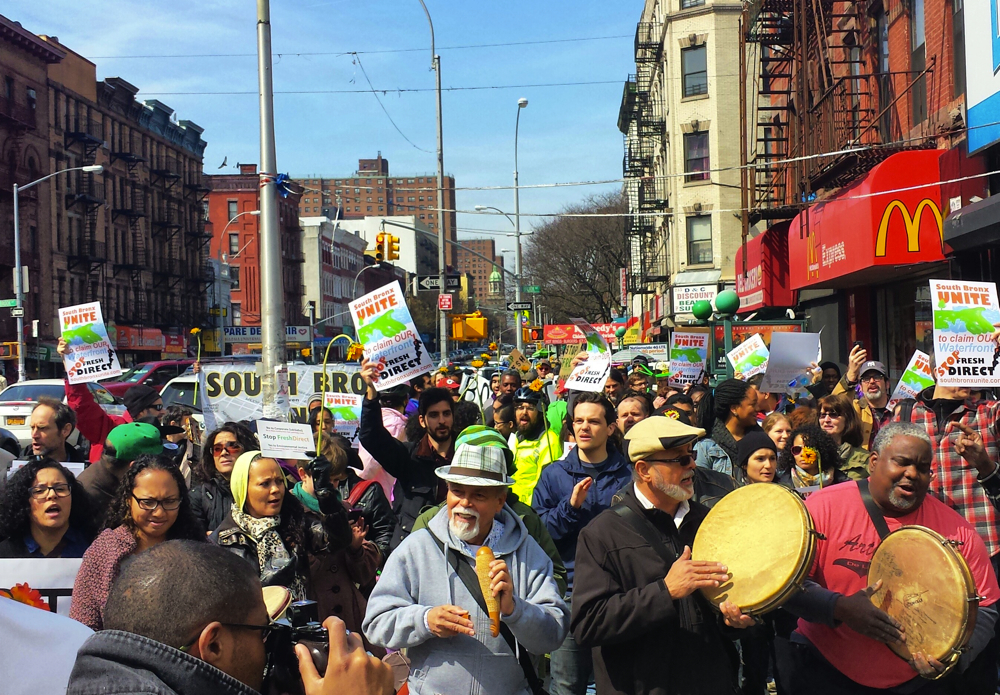 Ordering food on the Internet can offer a reprieve from the drudgery of the grocery store. A few quick clicks and you have ingredients for dinner without getting in a car or lugging bags of food on a bus or train. But while it may seem like online services allow groceries to magically appear at our doorsteps, there are, in fact, still quite a few warehouses, refrigerators, and trucks involved.

Nothing brings this fact into focus as clearly as the two-year struggle between community residents in New York’s South Bronx neighborhood and the online delivery service FreshDirect, which has been delivering food throughout the Tri-State area for nearly a decade.

The company says it has outgrown its current location Long Island City, Queens and hopes to build a new, expanded facility the South Bronx waterfront. At the core of the struggle is the fact that the proposed location butts up against a residential area. And some people who live in the South Bronx say they don’t want to see truck fumes—which have been linked to asthma—fill their community for the sake of FreshDirect’s customers located as far away as Connecticut, New Jersey and Philadelphia. (Some may even see this battle as a more appropriate use of the term “food gentrification” than the re-branding of collard greens.)

“It’s a lot of mileage, a lot of fuel, a lot of warehouses, and a lot of people getting low wages,” says Monxo Lopez, a member of South Bronx Unite, a grassroots group that came together to oppose FreshDirect’s move to the neighborhood in 2012, and now includes a coalition of 50 other religious and community groups in the area. Based on official FreshDirect documents the group secured via a Freedom of Information Act request, South Bronx Unite estimates that trucks could make as many as 1,000 trips to the proposed distribution hub every day.

Fresh Direct has invested heavily in lobbying area politicians and received roughly $130 million in tax breaks and grants from the borough, city, and state. From the beginning, the company has framed the move as inevitable. But South Bronx residents don’t see it that way.

First they initiated a boycott, then they filed a lawsuit requesting an environmental assessment. They also formed a visioning committee to develop alternatives to the move.

“We’ve been successful in not letting them break land for two years,” says Lily Kesselman, a photographer and member of South Bronx Unite who lives in the area with her family.

FreshDirect, which received criticism last summer for hiring Bronx resident and former community activist Majora Carter to promote the move, has put up a Web site called Fresh Direct Facts to tell their side of the story.

The company says the new location would create up to 1,000 new jobs, with targeted hiring for Bronx residents. It also claims it will create a fleet of green vehicles in the next five years.

“The expanded facility will increase access to fresh food and generate significant economic activity that will benefit local residents and all New Yorkers for years to come,” said a FreshDirect representative in a statement the company sent to Civil Eats.

One Yelp review recommended by the company, gets that idea across well. In it, a woman named Jennifer B writes:

I live in central Harlem and my local grocery stores are AWFUL!! From spoiled milk to refrozen ice cream, orange-white tomatoes and wilted greens—I could not shop around the corner. I was doing my shopping further down town and if I had anything cold or frozen, I would have to take a cab home. Not so cost effective. It took me about 2 times of doing this before a light went off. Delivery to my door? Of course! I figured it was worth a shot. The products are fresh and the price is around the same as whole foods.

Just a few short months after announcing the planned move, the company expanded its reach to the Bronx and added the ability to use Supplemental Nutritional Assistance Program dollars (food stamps) on the site for a limited number of zip codes in the borough.

But Kesselman doesn’t see much benefit to the area, which is the poorest congressional district in the nation. “We don’t have the kinds of markets that higher income neighborhoods do, but we do have grocery stores, bodegas, farmers’ markets, and organic food,” she says. “I don’t think FreshDirect is any more accessible. And asking people on food stamps to buy groceries on a computer doesn’t make sense to me.”

As for the employment opportunities, Kesselman is even less optimistic. “They have a Memorandum of Understanding that they will try to hire from this community. But it’s unenforceable,” she says.

In recent weeks, the strife between both two sides of this controversy has increased, and grassroots efforts to push back against the FreshDirect appears to be losing ground.

Two weeks ago, South Bronx residents held a sit-in at the proposed site, resulting in nine arrests. Monxo Lopez’s wife was one of those who were taken into police custody. “They only held them there for like half an hour,” he says. “The cops in the neighborhood understand what we’re trying to do.”

Then, on March 27, an appellate court threw out the group’s lawsuit asking for an update to the 21-year-old environmental impact statement FreshDirect is using to rationalize the move, and the grocery company claimed victory.

On their blog, members of South Bronx Unite, referred to the decision as a “disappointing reinforcement of the Tale of Two Cities,” but the group has made it clear they continue to push back against the move.

“Our fight isn’t over and unlike the way FreshDirect spins it, this project still isn’t a done deal,” says Kesselman. The company is hoping to receive more subsidies, but faces several public hearings in the meantime. And the members of South Bronx Unite say they are planning to show up and weigh in with oral arguments.

An Alternative Ready for Climate Change

Meanwhile, the need for an undated environmental impact statement isn’t merely symbolic. And, as Lopez leads the group that is envisioning alternative uses for the South Bronx waterfront, the cartography professor and his neighbors have been drawing up a plans for a district with a “much lighter footprint.”

“It’s a waterfront that is prone to flooding,” says Lopez. “There’s a high probability that it will be under water at least some of the time, especially if we see more super storms like Sandy.”

Their idea is to create a combination green space and outdoor ethnic food court showcasing the diverse foods of the neighborhood. The group has presented its plan to several neighborhood officials, who have recently begun proposing a similar vision in the area near the proposed site of the distribution hub.

“We still don’t want FreshDirect, but I’m hopeful that the community will have a say either way,” says Lopez. “You can’t plan a waterfront without taking into account Mother Nature.”