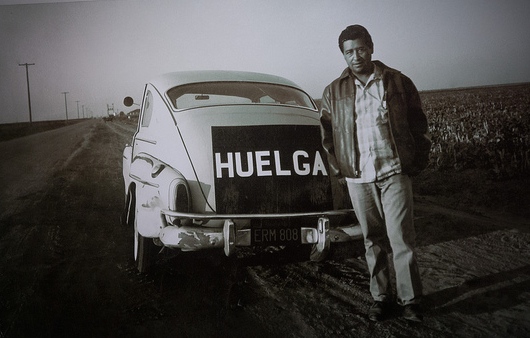 Even in this day and age, injustice remains an invisible ingredient in much of the food that we eat.

March 31st is Cesar Chavez Day. As you probably know, Cesar Chavez was a co-founder and leader of the United Farm Workers union. A farmworker himself, in the 1960s through the 1980s, Chavez organized with workers in the fields in California who struggled for fair wages, safe working conditions, and respect on the job. Chavez also collaborated with Filipino labor leaders like Larry Itliong and Philip Vera Cruz to found the United Farm Workers.

Because of Chavez’s legacy of multi-racial organizing for workers’ rights, the Food Chain Workers Alliance (FCWA) chose Cesar Chavez Day for a day of action to raise the minimum wage. On Monday, March 31st, food workers from around the U.S. are meeting up in Washington, D.C., to deliver a MoveOn.org petition with over 101,000 signatures and a letter signed by over 100 food movement organizations and businesses to House Speaker John Boehner. Boehner is refusing to allow the members of the House of Representatives to vote on the Fair Minimum Wage Act (H.R. 1010), which would increase the federal minimum wage to $10.10 per hour, and the tipped minimum wage to 70 percent of that. The current national minimum wage is $7.25 per hour, while the tipped minimum wage is $2.13.

The nation’s 20 million food workers make up one-sixth of the workforce in the U.S., making the food system the largest employer in the country. At the same time, over one-third of food system workers are paid less than $10.10 and make up the largest sector of minimum wage workers. In fact, the three largest low-wage employers in the U.S. are food companies: Wal-Mart, Yum! Brands (owner of Pizza Hut and Taco Bell) and McDonalds. Raising the minimum wage would make a big impact for these workers, their families and the economy.

John Schauer (pictured right) is a 25-year-old Wal-Mart warehouse worker participating in this Cesar Chavez Day action in Washington, D.C. John has been employed by a temporary staffing agency for over a year at a Walmart warehouse in Hammond, Indiana, about 20 miles outside Chicago. he started out earning $9.50 per hour, and since he earned his certification to operate a forklift, he is now earning $10.50 per hour.

The FCWA’s Cesar Chavez Day action will be John’s first time in Washington, D.C. An active member of Warehouse Workers for Justice, he decided to go, even though he makes a little more than the proposed minimum wage of $10.10 per hour because, he says:

I can’t imagine people who have a family to support–how they do that on minimum wage. The economy would be better with a raise in the minimum wage because people would be spending money because they’d have money to spend.

The workers taking this action in D.C. on March 31st represent the five major sectors of the food chain–production, which includes farmworkers, meat, poultry and food processing; distribution, which includes warehouse workers and truck drivers; and retail, restaurant and food service workers. On the same day, FCWA members in California, Florida, and Arkansas will visit their Congressional representatives to ask for support for the bill.

You can show your support for John and millions more low-wage workers by following @foodchainworker on Twitter and Facebook!

Joann Lo is the Executive Director of the Food Chain Workers Alliance, a national coalition of unions, worker centers, and advocacy organizations representing workers throughout the food system. Joann has over 16 years of experience in labor and community organizing and alliance-building. She is vice chair of the Leadership Board of the Los Angeles Food Policy Council and mom to two energetic young kids. Read more >