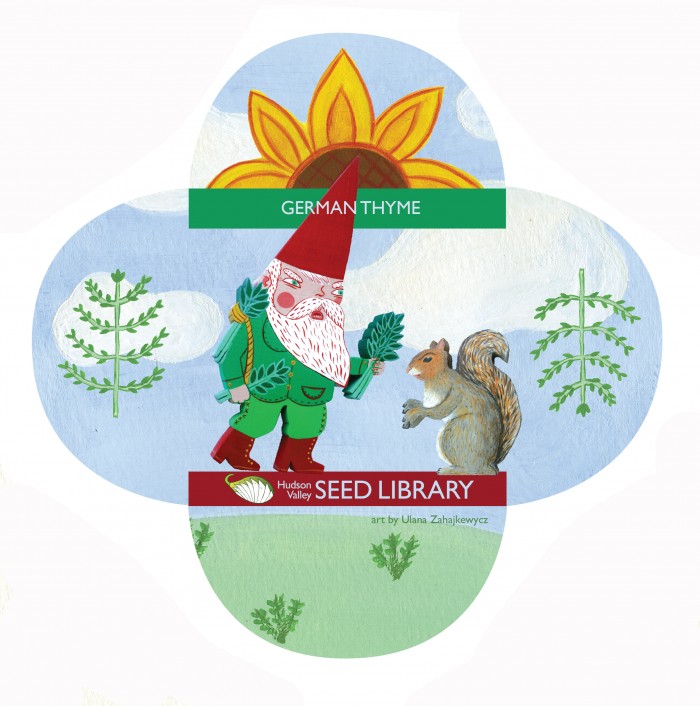 There’s no better way to celebrate the beginning of spring than to stock up on seeds and get ready to break new ground. Gardening always keeps you guessing, because you never know from one season to the next what might delight you, and what might disappoint you. Inevitably, some seeds sprout and thrive while others rot, wither, or fall victim to fungus or critters. That’s life.

If you’re afraid to try growing fruits, flowers, herbs and vegetables from seed because you might fail, you’re depriving yourself of the chance to witness a wondrous evolution. It’s humbling and heartening to take part in a ritual so primal, and so essential to our survival. It’s even more gratifying when you realize that you can transform a packet of seeds into a patch of greens or flowers with just a little time and effort. And it’s easier to do that when you have savvy seed farmers like the folks at the Hudson Valley Seed Library (HVSL) reviving rare, choice varieties of seeds that are especially well-suited to your region.

Now in its tenth year the HVSL has inspired dozens of similar endeavors around the country, so that gardeners everywhere can find open-pollinated, non-GMO seeds that are native to their neck of the woods.

The HVSL has also made a name for itself by revitalizing another long-lost facet of the seed trade: seed packet art. Every year, to compliment its locally grown, regionally appropriate seed selections, the library commissions local artists to produce original art for a selection of seed packs. The artwork has become an event of its own. An annual exhibit called The Art of The Heirloom, was featured at this year’s Philadelphia Flower Show and is currently on display at the Horticultural Society of New York until March 21st.

The art packs employ an eclectic range of mediums: everything from paintings and illustrations to collage, ceramics, textiles, cut paper, etchings, mosaic, and wood. The style ranges from elegant to whimsical. And there’s bonus art along with more details about the artists and the seeds on the inside of each pack. The packs are lovingly designed and printed, so that you can save them to use for decoupage or other crafts projects.

Last year, when planting season rolled around, I grabbed a couple of HVSL seed packets I’d received as a gift: Sulphur Cosmos, and State Fair Zinnia. It only took ten minutes to scatter those seeds, but I basked in their reflective glory for months. The flowers started blooming their heads off in late spring and didn’t stop until fall gave way to winter. All summer long, whenever I sat on my porch, people walking by would say “I love your flowers!”

It may seem like a trivial thing, but knowing that so many people were enjoying all those flowers cheered me up at a time when I was mourning the unexpected death of a young nephew. People are like plants; some of us flourish while others flounder. We all start out as seeds and end up as compost. Ideally, somewhere along the way we get to bloom and bear fruit, and bring some joy into this world. I rejoice every spring that I can count on the HVSL to provide me not only with the seeds I need to do that, but with their backstory, their cultural significance, and a thoughtful piece of art.

So, this year, in my nephew’s memory, I’ll scatter the seeds of the HVSL’s Marigold Medley in front of my fence. According to the packet, the marigold was the Aztec symbol of death, and it’s used to this day to decorate graves and altars. Dia de Los Meuertos festivals employ garlands and crosses made from thousands of marigold petals, and pathways are lined with the bright orange blossoms. The festivities also feature rows of cut paper banners called papel picado, which provided the inspiration for the exquisite artwork by paper cut artist Jenny Lee Fowler, which graces the cover of the pack. As the text inside notes, it’s a tribute to “the celebration of life and death which plays out in our gardens every year.” And in our lives, too.