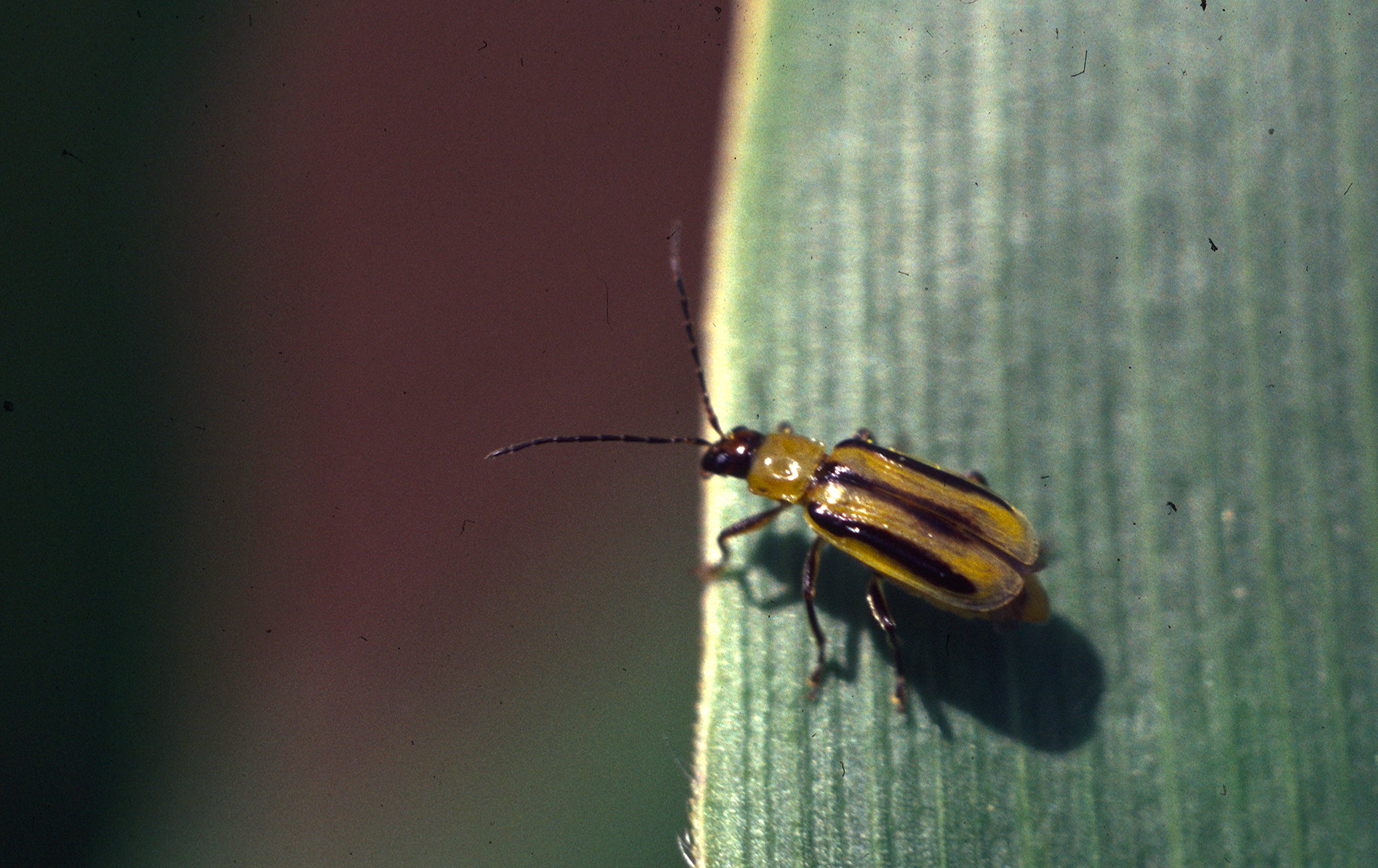 Genetically engineered (or GMO) corn that was developed to kill insect pests has been causing resistance in some of those very insects for several years. But the issue has not received as much attention as it should. A new research paper in the prestigious journal, Proceedings of the National Academy of Sciences (PNAS), may change this by providing additional cause for concern.

Rootworms in some areas are now resistant to two of the three available Bacillus thuringiensis (Bt) toxins that previously controlled them. And because only one or two of these toxins are used per corn variety, a number of fields in the corn belt are now sustaining severe damage.

Bt was hailed early on for reducing the need for chemical insecticides. But resistant rootworms may be starting a reversal of this trend, noted by University of Illinois Entomologist Michael Gray last spring. Some farmers are reverting to the use of harmful soil-applied insecticides to kill the beetles’s larvae.

Two Strikes, and Other Bad News

The new paper is also notable for several other reasons.

It found that the same rootworms that are resistant to Monsanto’s Bt toxin are also resistant to one of the two other rootworm Bt toxins, available from Syngenta. This so-called cross-resistance means that there is one less Bt option for controlling rootworms than was thought to be available, leaving only one in some parts of the corn-belt.

This means big problems for the industry plan for stemming resistance to Bt in this major pest. Their approach was  to throw several Bts at the insect at the same time, because doing so makes it less likely for resistance to develop. This strategy, called “pyramiding,” has backfired because Monsanto’s and Syngenta’s varieties were, in effect, too similar. No pyramid, no resistance strategy!

Making the whole thing worse is the fact that the rootworm Bt corn was never as effective as the previous Bt toxins that control stem borers. This greatly reduces the effectiveness of the other main, EPA mandated, strategy for controlling resistance—requiring the planting of a “refuge” area of non-Bt corn. The refuge requirement was set at 20 percent of the crop when approved in 2003, and recently lowered to only 5 percent when pyramided varieties are used. The refuge corn provides non-resistant mates for (previously) rare resistant rootworms, thus diluting the effect of resistance genes to manageable levels. But because rootworm Bt toxin is less lethal, more rootworms survive, eventually overwhelming the refuge strategy. Rootworms can develop resistance to Bts very quickly–and did so within about four years after introduction–when the refuge area was 20 percent.

This means that the remaining effective Bt toxin will probably be quite vulnerable to resistance.

The PNAS paper also shows that resistance to Bt has likely been spreading since it was first discovered in 2009, and that the level of resistance seems to be increasing.

The authors conclude that the current 5 percent EPA-mandated refuge requirement needs to be increased. Scientists recommended a refuge size of 50 percent non-Bt corn in 2003, but EPA caved in to industry pressure and allowed 20 percent refuges, probably resulting in more rapid development of rootworm resistance. Of course, with smaller refuges, the companies can sell more of their expensive, engineered seed.

More problems may lie ahead for engineered rootworm control genes. A second industry strategy is to develop new types of controls that do not rely on Bt toxins. For example, a recently discovered type of genetic material, called interfering RNA (or RNAi) is being touted, and Monsanto now has an application for approval at USDA. But some RNAi may harm important beneficial insects. And eventually, rootworms may develop resistance to RNAi too, if it is approved.

Some beneficial insects, called “natural pest enemies,” reduce pest levels and the need for insecticides. Harm to these helpful insects may be more likely to occur from transgenic rootworm controls than Bt toxins aimed at corn borers. This is because rootworms are beetles, and they’re related to many beneficial insects, such as ladybird beetles, which are then more likely to become collateral damage. In fact, in 2012, scientists at Cornell University found that rootworm Bt toxin is likely to be harming several important species of beneficial beetles in GMO corn. By contrast, corn borer is in the butterfly and moth group, and there are fewer beneficial insects in this group that protect row crops.

A better approach, and one recommended by the PNAS paper, is crop rotation—growing different crops on the same acreage in succession from year to year. This is a common practice of organic farmers and a common component of other agroecological farming methods. It is also incredibly effective for controlling rootworms in most places. In fact, where long rotations are used, no chemical insecticides or Bt toxins are needed to control these pests.

The Problem is Monoculture, and GMOs are Making it Worse

Of course, using agroecology has many other benefits, and can be as or more profitable than industrial monoculture, as I have written about before. These practices help farmers reduce water pollution from fertilizers and increase soil fertility and crop resilience, while maintaining or increasing productivity.

But GMO crops, along with ill-conceived crop subsidies and a skewed research agenda focused on industrial agriculture, have encouraged the opposite—more monoculture. Simply recommending that we change farming practices, without changing the policy and other infrastructure that encourages monoculture, will not foster the sustainable agriculture that we need.

Growing the same crops year after year in the same fields is a recipe for big pest problems, from weeds and insects to diseases. And using the same simple methods to kill pests and weeds on monoculture crops is merely a recipe for more pesticides. Monoculture promotes higher numbers of pests, because the pests adapt to a particular crop when they can find it in the same place from year to year.

More pests mean a higher number of rare, naturally-occurring pest genes that confer resistance to chemical pesticides or Bt toxins. When the same pesticide is used over and over, resistant pests survive and multiply quickly. This practice is also what has caused the epidemic of glyphosate- or “Roundup-resistant” weeds now plaguing US farmers. That is no coincidence.

Unfortunately, the new farm bill, with its highly subsidized insurance for industrially produced corn and soybeans, will bring more of the same. Continuing corn ethanol mandates, that have requisitioned about 40 percent of the corn crop, have also encouraged the planting of more monoculture corn.

The new PNAS paper provides yet more evidence that our current industrial farming system is broken. And continuing down that road is swimming against the tide caused by high pest populations. How many more warning signs will it take before we begin to create an agriculture system that is sustainably productive, and able to meet the rapidly escalating challenges of climate change and resource scarcity?