By Mia MacDonald and Judy Bankman 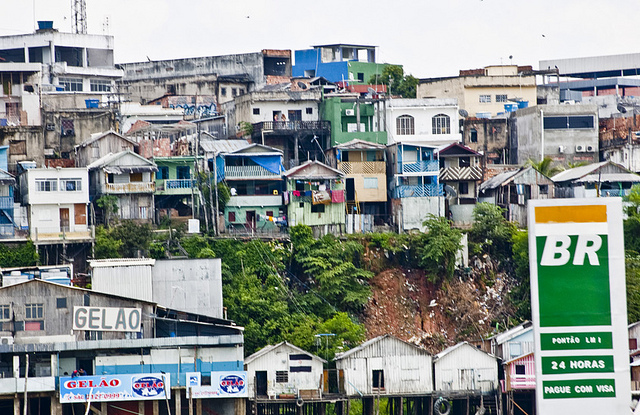 What if your national dietary guidelines advised you to cook and enjoy fresh, whole foods, and serve them with friends and family while thinking critically about advertising? Hard to imagine, isn’t it?

Well, that’s exactly what Brazil’s Ministry of Health is recommending with the “food based” dietary guidelines it issued recently.

Unlike the U.S. dietary guidelines (or “MyPlate”), which focus on reducing solid fats and added sugars, and pinpoint a long list of nutrients to consume or reduce, Brazil’s guidelines keep it simple by encouraging people there to eat more fresh, unprocessed foods.

Here are the guidelines in full:

2. Use oils, fats, sugar and salt in moderation.

5. Eat in company whenever possible.

6. Buy food at places that offer varieties of fresh foods. Avoid those that mainly sell products ready for consumption.

7. Develop, practice, share and enjoy your skills in food preparation and cooking.

8. Plan your time to give meals and eating proper time and space.

9. When you eat out, choose restaurants that serve freshly made dishes and meals. Avoid fast food chains.

10. Be critical of the commercial advertisement of food products.

“I think it’s terrific that [Brazil’s guidelines] promote real foods, cooking, and family meals, rather than worrying about the nutritional quality of processed foods or dealing with single nutrients,” Marion Nestle, a professor in the Department of Nutrition, Food Studies, and Public Health at New York University, told us recently.

Like many developed and developing countries, Brazil has seen recent spikes in the numbers of overweight and obese people. In 2011, nearly half of Brazilians were overweight, and about 16 percent were obese. Carlos Monteiro of the University of Sao Paolo attributes this widespread increase in body mass index (BMI) to the transition from unprocessed or minimally processed foods such as rice, fruits, and vegetables to “ultra processed foods.”

Like the U.S., Brazil is a major agricultural producer. Brazil-based JBS is the world’s largest processor of animal protein, and the nation tops the world in exports of beef and chicken. It’s also a leading player in the global soybean boom, and miles and miles of Brazil’s rainforest and savannah have been bulldozed in recent decades to grow livestock feed. In addition to their thriving export trade, Brazilians have begun eating more meat, dairy products, and eggs. And as the Brazilian middle class has grown, transnational food companies like McDonald’s, KFC, and Coca-Cola have expanded their operations and marketing in Brazil, spreading U.S.-style fast food culture further.

But these new guidelines are pointing in the opposite direction: They advocate slower food. By focusing on the importance of taking the time to prepare meals and eat in good company, the new Brazilian dietary guidelines prioritize food culture and the environment in which meals are eaten. This is extremely important: Research by the U.S. Department of Agriculture (USDA) has shown a link between eating outside the home and increased obesity.

Brazil’s new dietary guidelines are especially illuminating when we compare them to the ones we’ve been told to follow here in the U.S. Our latest guidelines, dating from 2010, focus entirely on specific nutrients. They include statements like “reduce daily sodium intake” and “consume less than 300 mg per day of dietary cholesterol.” While these are clearly good recommendations, their specificity makes it difficult to know exactly what foods to consume. This complicates and can even obscure the fundamentals of a truly healthy diet.

Critics have also pointed out that the U.S. guidelines implicitly protect the food industry by leaving out a recommendation to eat less of specific food products. They also complicate individual decision-making. For example the guidelines state, “Replace protein foods that are higher in solid fats with choices that are lower in solid fats and calories and/or are sources of oil.” For those well-versed in nutrition, this statement might mean, “replace red meat with plant proteins.” But for many others, it’s hard to know for sure what you’re being encouraged to do (or not do).

As the U.S. Dietary Guidelines Committee works on the 2015 guidelines, they’ve also been accepting public comments. Some commenters have suggested the Committee use Brazil’s new guidelines as a model. “It’s clear from the questions the Committee is asking that its members are increasingly concerned about cultural and environmental influences,” says Nestle. “This is a good sign.”

The tenth and final recommendation, “Be critical of the commercial advertisement of food products,” is particularly unusual in the world of dietary guidelines. This indicates the Brazilian government is aware of the harmful effects of advertising and is actively trying to combat food industry manipulation through its policy statements (and actions).

There’s a history here. In 2013, the city of São Paulo, Brazil’s largest city, fined McDonald’s $1.6 million for using toys and other inducements to appeal to children. São Paulo also was the first city in Brazil to adopt Meatless Mondays (“Segunda Sem Carne” in Portuguese), which has now expanded to 15 cities across the country. Brazil’s government has also mandated healthier school food.

In contrast, our dietary guidelines mention food marketing to kids just once, on page 59 of a 95-page document. And while non-profit groups like the Center for Science in the Public Interest (CSPI) are working to combat junk food marketing to kids, most government agencies are silent on the issue. First Lady Michelle Obama did announce a new proposal to regulate the marketing of junk food in schools, but it is yet to be seen whether any such language will make it into the 2015 dietary guidelines.

Perhaps the drafting Committee will look south, and Brazil’s pioneering food guidelines will encourage our own policymakers to put more value on a critical-thinking, home-cooking, socially vibrant culture of real food than on the interests of the food industry.