Farmworkers to Wendy's: 'Get With the Program' | Civil Eats

Farmworkers to Wendy’s: ‘Get With the Program’ 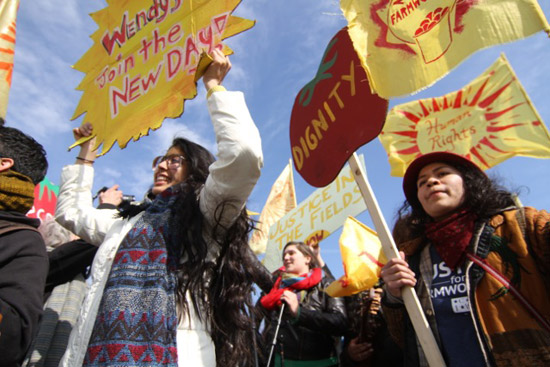 Around 750 farmworkers, student activists, and faith leaders marched on the Wendy’s corporate headquarters in Ohio yesterday, before heading to the chain’s flagship restaurant. The goal: To ensure that the tomatoes on Wendy’s burgers are picked by people being treated fairly. 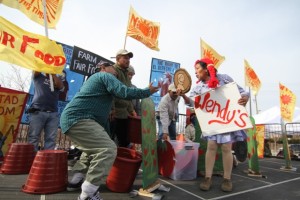 The day marked the mid-point of The Coalition of Immokalee Workers’ (CIW) 10-day, 10-city tour through the Midwest and the Southeast, targeting both Wendy’s and the grocery chain Publix. Coalition members were met by vans of protesters from as far away as New York, Boston, Denver, and Chicago, in an effort to put pressure on the last remaining hold out, as the other four of the five largest fast food companies–McDonald’s, Subway, Burger King, Taco Bell–have all signed on to the CIW’s Fair Food Program. A total of 12 major corporations have now signed the agreement, including Chipotle and Trader Joe’s in 2012, and Walmart this January.

A great deal of the winter tomatoes we eat in the US are grown in Florida, where thousands of seasonal workers support a $650 million industry. For decades, these people faced some of the most deplorable conditions in the food chain, including several cases of abject slavery. In place since 2010, The Fair Food Program has not only put standards in place to protect workers in farm fields from harassment and forced labor, it also ensures that workers make one penny more per pound for the tomatoes they pick. (If that doesn’t sound like much, consider this: When passed from the corporate buyers, it amounts to as much as $6,000 a year–a number which represents a 50 percent raise, or the difference between making $50 and $80 a day for workers with families often living below the poverty line.)

Ironically, Wendy’s current CEO, Emil Brolick was the president of Taco Bell in 2005, when the company signed the first agreement with the CIW. (Beginning in 2001, CIW convinced thousands of students to stop eating Taco Bell burritos with its Boycott the Bell campaign.) At the time Brolick stated an interest in playing “a leadership role within our industry to be part of the solution.”

This year, Brolick appears less interested in playing such a role. A response to CIW on the company’s website reads: “Our responsibility to Wendy’s customers is to negotiate directly with our suppliers–not third-party organizations–to ensure our product specifications are met at a competitive price. If our suppliers incur additional labor costs, we would expect them to pass them on to us over time.” 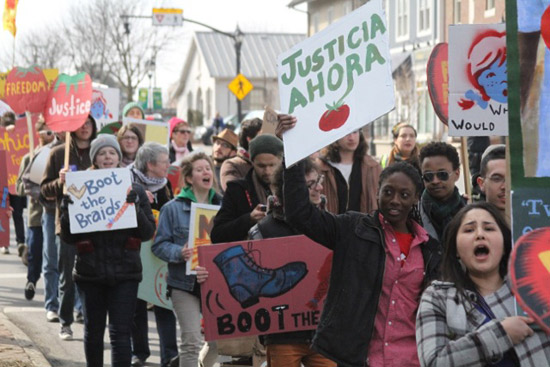 Silvia Perez, a CIW staff member and part-time farmworker, has been riding with around 60 other coalition members and their families in a bus and three vans as part of this week’s tour. The weather has been cold, and the group is staying in churches and community spaces between cities, in what might sound like a grueling physical experience. But Perez doesn’t see it that way.

“For me this tour isn’t very difficult. What is difficult is working in the fields, making such low pay. So I’ve had a sense of pride this week, with so much support from around the country.”

The Coalition’s tour culminates at the Publix corporate headquarters in Lakeland Florida. Daily tour updates are available on the CIW web site.