Building a Restaurant After Genocide: Josh Ruxin’s ‘A Thousand Hills to Heaven’ 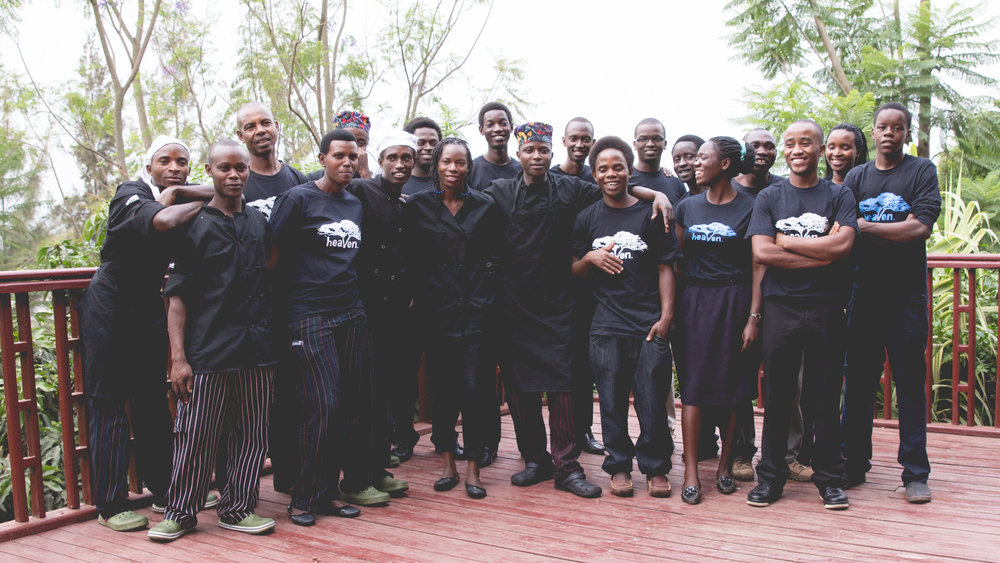 In the 35 years I’ve been working in restaurants, I have seen more than enough to scare a person out of the business.  I’ve seen fires, near-fires, and explosive fire suppression systems. I’ve taken coworkers’ thumbs to the hospital for them on two separate occasions. And I’ve seen a guy slip while cleaning an oven’s exhaust hood and dunk his foot in a deep fryer, causing his nylon sock to melt into his skin.

These are the kinds of stories any American cook can tell. And, after reading Josh Ruxin’s book, A Thousand Hills to Heaven: Love, Hope, and a Restaurant in Rwanda, they mean nothing.

You see, in all the towns where I’ve cooked–and there have been eight of them–no one was ever trying to pick up the pieces after genocide.

Ruxin’s memoir is not about the mass killings that occurred in Rwanda 20 years ago this April. It’s about opening a care facility and a world-class restaurant and job training program called Heaven. But the background of genocide is unavoidable. And it brings stark relief to Ruxin’s efforts to foster health and hope in Rwanda.

Ruxin is a member of the faculty at Columbia University and co-founder of Health Builders, an international non-profit organization that builds health centers around the world. His book traces his family’s journey from their privileged life in New York City to Rwanda’s capital city, Kigali.

Before traveling to Rwanda, Ruxin and his wife Alissa were heavily invested in work with NGOs. Ruxin had worked as a Peace Corps volunteer and then gone on to work in public health in Kenya, Nigeria, and Ethiopia, and co-chaired the UN Millennium Project’s task force on AIDS. Alissa had a doctorate in public health, and an interest in working overseas. The two solidified their commitment to international aid work after they met Stephen Lewis, an advocate who would go on to become Rwanda’s health minister. The night they met, Lewis asked a simple question: “Why in the world aren’t you doing a Millennium Village in Rwanda?” He went on to talk of the high-reaching hopes of people in Rwanda, despite the recent violence and a raging AIDS epidemic.

“I couldn’t agree with you more,” was Ruxin’s response.

Ruxin admitted that there was a bit of the guilt that often comes with white privilege driving their decisions.  “I know how all this sounds,” he writes early on. “Great moments, great schools–a place in Manhattan, for God’s sake. But we were not rich, had no trust funds, and we pinched ourselves daily to be living like this.  We knew that luck and privilege were involved, and we were intent on earning our keep and paying it back to the world, somehow.”

Earning their keep meant uprooting their lives and emigrating to Rwanda. Ruxin started with what he knew about international aid and worked to bring additional food and healthcare to Kigali.  Then, thanks to Allissa’s knowledge of restaurants, they discovered an opportunity to provide jobs as well. This is the heart of the story.

It is difficult, in the best of circumstances, to build a restaurant from the ground up. But imagine doing so with a group of people who have never even eaten in a restaurant, let alone worked in one. Now, imagine building a team with people whose family members may have killed one another as recently as one generation ago.

Any successful chef is adept at building teams, and maintaining them despite the usual distractions. But the challenges Ruxin faces take team-building to a new level. In one example, he finds himself exhuming the bones of a genocide victim from his back yard after a stranger knocks on his door looking for her brother’s body. He then has to try explaining the incident to his employees, as well as his three small children.

A Thousand Hills to Heaven is a memoir of making the impossible possible. The Ruxins created a model for success, and helped bring health and happiness to a region that desperately needed it. But they did not need to bring hope. Rwanda is overflowing with hope.

Photo and video care of Heaven.