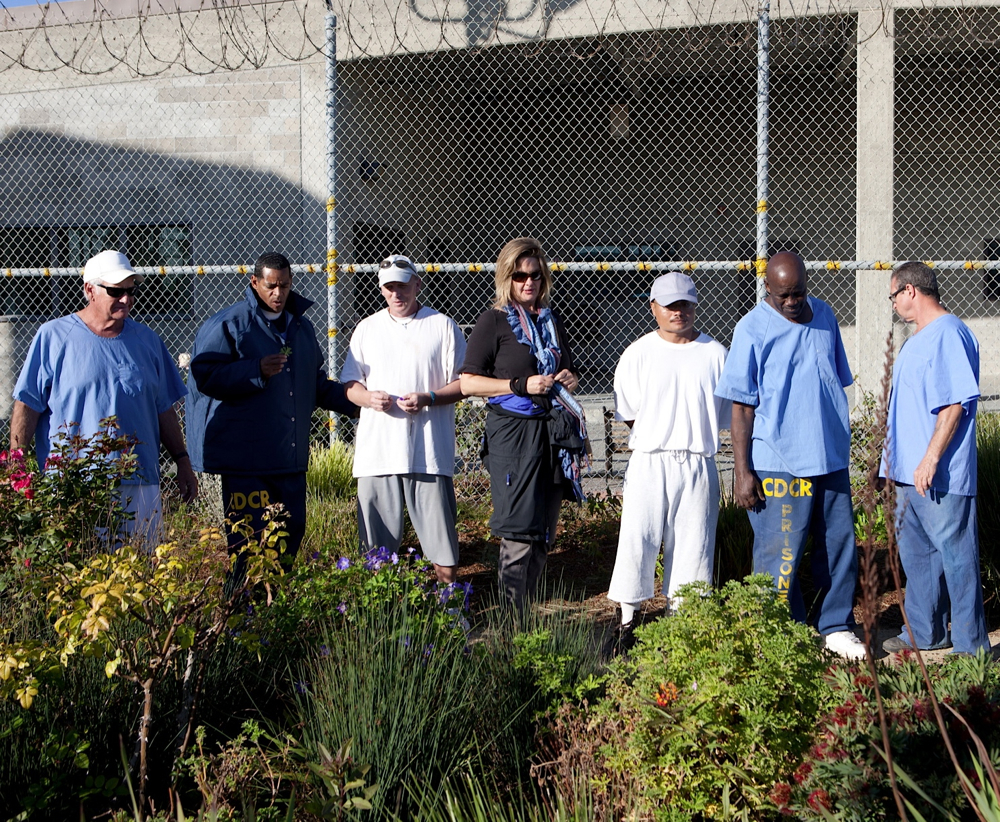 Eric Davis remembers the first time he saw the flower garden at San Quentin prison. “It [was] the only green thing in the yard,” he recalls.

Last fall, the Insight Garden Program (IGP) and Oakland community gardening nonprofit Planting Justice added a little more green. An organic vegetable garden joined the flowers that were planted in 2003. And this month, the vegetable garden will have its first harvest.

“It’s our victory garden,” says Beth Waitkus, director of IGP. “It started with one of the officers calling it that, and now they all do.” 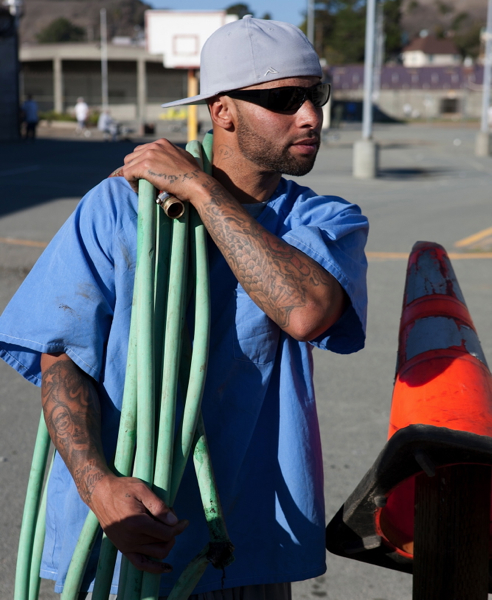 Case in point: This first harvest. The four raised beds located between a dormitory, a chow hall, and an entry gate were planted with onions, garlic, and a variety of leafy green vegetables back in November.

Since then, the plants have thrived. But the produce they put forth won’t be enough to feed all 3,700 inmates at San Quentin. Selective sharing of any kind is against the rules in prison; you either share everything with everyone, or nothing with no one. That means someone else had to take the harvest.

“The guys’ idea was to make it a community service project and give it to a local food bank,” says Waitkus. “It’s their opportunity to give back.”

And the garden provides in other ways to the men. “You’re learning about plants, but you’re also learning about yourself,” says Eric Davis of his time in the IGP. “I started to see things differently, to say the least.” The IGP curriculum includes an “Inner Gardener” module, which utilizes meditation, poetry, and a variety of self-reflection tools as elements of emotional process work, along with sessions held by ecotherapists and horticultural therapists.

Waitkus tells the story of one such exercise led by an eco-therapist, who directed the class to think about things they wanted to weed out in themselves as they went out and worked in the garden. When they came back, former inmate Mike Jackson shared what he had learned: “If I don’t pull the weeds out by the roots, they’ll keep coming back.”

Making Connections to the Food System

On a more pragmatic level, the “Outer Gardener” module teaches the basics of gardening and horticulture as potential job skills, while the “Food and Urban Agriculture” module draws the line from urban community gardening to the food system as a whole. All of those things came together for Eric Davis, who was hired upon his release last September by Planting Justice.

In his new role, Davis has done hands-on gardening and landscaping as part of a Transform Your Yard (TYY) crew as well as canvassing work. But educational outreach is one of his favorite parts of the job. Among other things, he gets to introduce novelties like kale smoothies to kids who have grown up on soda and chips. “At first they’re scared to eat anything green,” he says. “Then you see the look on their faces–they’re surprised that it’s good.”

Making those kinds of conversions is part of the vegetable garden’s value to the prison inmates, according to Planting Justice educational director Haleh Zandi. “We exchange family recipes and other ancestral knowledge about food and plants so that the men can go back and share it with their own families and communities,” she says.

Along with the personal comes the political. In Zandi’s words, the Food and Urban Agriculture module of the IGP curriculum “exposes inmates to the food system and its injustices.” The inmates can start to see the ways that the prison food system is only a more institutionalized version of the food system outside. Big Ag and food service models still predominate, while small-scale alternatives spring up on the margins.

It’s worth noting that while the vegetable garden at San Quentin is the first among California state prisons, other states are further along in farming their own produce. Ohio, Washington, and even Texas have well-established food gardens that supplement the diet of prison inmates and, in some cases, also support food banks in neighboring communities. 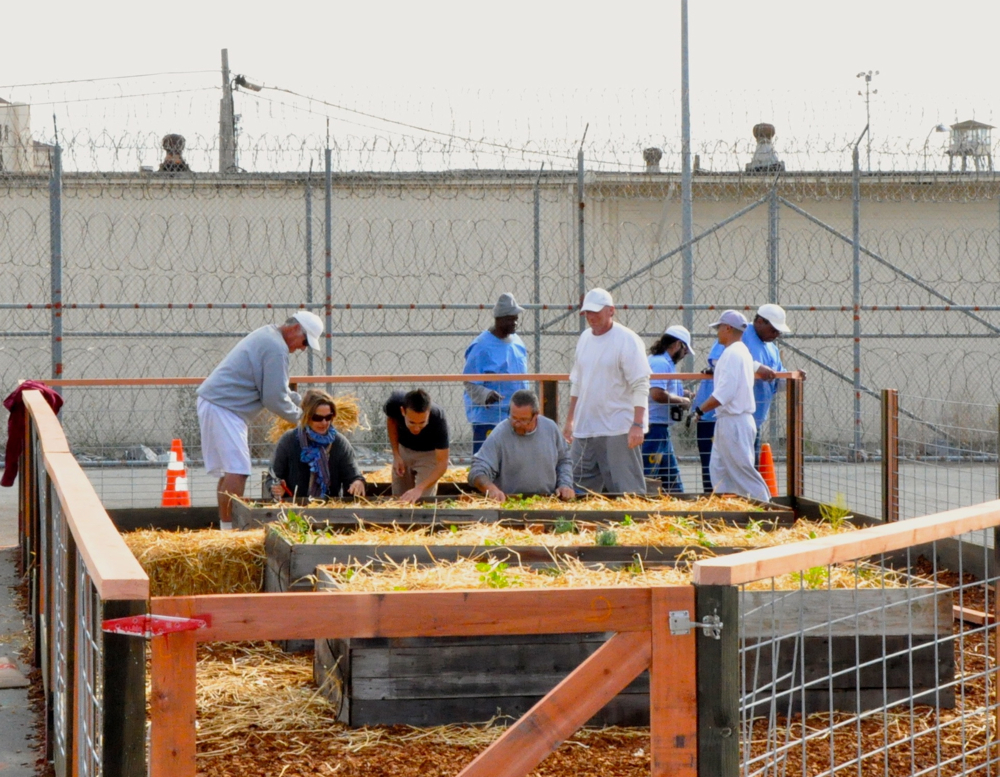 But even if the men at San Quentin can’t eat what they grow (yet), they are reaping other kinds of rewards. As they learn to work with their “outer gardener” and their “inner gardener,” they also learn to work with one another. Waitkus, who did research on the garden for her master’s thesis, says:

“The major finding … is that the guys don’t self-segregate in the garden like they do in the prison yard. There’s something about the diversity of ecological systems that teaches us how to come together as a community.”

What I learned in those years is that when strangers grow and share food together, The Other ceases to be so threatening. The ones who were once an abstract category – the Poor Folks, the Rich Folks, the Black Folks, the White Folks, the Illegal Aliens – cease to be categories. They become instead the people they’ve always been: Mack, Donny, Vaughn, Emma, Bones, Zach.

And, as the gardens built by the IGP and Planting Justice show, anyone who joins with others to work in a field of shared meaning comes away changed by the encounter. As an inmate named Jeff puts it: “I could never go back to what I was doing before, because now I know too much.”