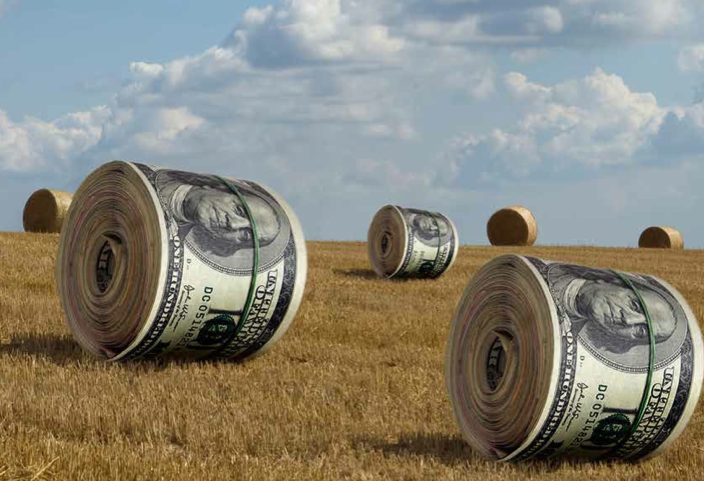 By all accounts, Jude Becker is a very successful farmer. His organic, pasture-raised Becker Lane pork, is considered the best of the best. It’s for sale in several Northern California Whole Foods and at farmers’ markets in Chicago, as well as on plates in several high-end restaurants around the country. There’s even a small retail market for it in Japan.

Becker is generally able to cover his costs and he’s luckier than most smaller-scale farmers when it comes to land. In fact, he has been running his pork operation for the last 12 years on 300 acres that belong to his family. But his relationship to that land is less secure than it sounds. Several of his family members would prefer to sell the land or rent it at market value, and–as a small farmer in Iowa, an area dominated by agribusiness—he is unable to secure the credit to buy it from them outright.

“It’s very easy for a young farmer to get … enamored with this false sense of security that they have land access, because they happen to be living on the land and farming it,” he told researchers at Oakland Institute recently. “But that doesn’t mean you have access.”

Becker isn’t alone. This is a terrible time for young and beginning farmers to find land on which they can make a solid long-term commitment, whether through ownership or affordable leasing. That’s why the latest report from the Oakland Institute, an independent policy think tank, is so troubling. It details the ways that institutional investors—including hedge funds, private equity, pension funds, and university endowments—are buying up farmland as an investment, and, in doing so, keeping small producers like Becker from farming on it.

The Oakland Institute’s report, called Down on the Farm: Wall Street: America’s New Farmer, looked at huge investors and pension funds, such as TIAA-CREF, the Hancock Agricultural Investment Group (HAIG), and UBS Agrivest–an arm of the bank’s global real estate division–and found that these groups have a bottomless appetite for farmland.

“Over the next 20 years, 400 million acres, or nearly half of all U.S. farmland, is set to change hands as the current generation retires. With an estimated $10 billion in capital already looking for access to U.S. farmland, institutional investors openly hope to expand their holdings as this retirement bulge takes place,” reads the report.

Anuradha Mittal, the founder and executive director of the Oakland Institute and an expert on land grabs in the developing world, says that while nowhere near as much land has changed hands in large-scale land acquisitions here as it has abroad, there’s still reason to worry.

“The real issue is that who owns the farmland will determine how it is used or misused,” says Mittal. “People who have no relationship to agriculture are moving into this because they see it as a stable investment with solid returns: Like gold but with yield.” When land becomes a commodity, owned by those who have never farmed and never will, she adds, “it produces commodities. And the multifuctionality of agriculture, in terms of what it does for rural economies, job creation, food security, and biodiversity–all of that is forgotten.”

Not only is there little incentive for banks and investment groups to see land farmed sustainably, but a pension fund like TIA-CREFF, must, by nature, focus on getting the best return possible per acre.

“They’ll be moved by what makes the most profit,” asks Mittal. “At the expense of local food systems, people, and the environment.”

In one example, the report cites that HAIG paid $12 million for an 8,500-acre family-run ranch in Northern California:

The previous owner, a 71-year old farmer named Dick Schader, exemplifies many of the generational challenges facing U.S. agriculture. He is an operator whose children have no interest in farming and whose retirement helps to further consolidate corporate farm ownership. When the land was still his, he used the 4,700 irrigated acres to grow alfalfa, which largely went to supply dairy operations within the region. But under HAIG’s management, the land is reportedly being leased to Anderson Hay and Grain, the biggest hay exporter in the country. Instead of growing alfalfa, Anderson Hay and Grain intends to grow the more lucrative timothy, a high-fiber grass exported mainly to Japan, which is favored as high-quality feed for race horses and certain dairy cows.

So far, a fairly small percentage of farmland has been scooped up by banks and investor groups, but the money is there, says Mittal. And as farm values go up, many investors will wait it out, hoping for better deals.

“The result is that money languishes on the queue, waiting for bargains to emerge,” the report explains. For instance, USB Agrivest “remains under intense pressure to acquire farmland quickly. In mid-2012, the queue for the commingled fund stood at $147 million.”

As Mittal sees it, “A trend is happening. If it goes unchecked, it will create a speculative bubble.”

Landlords with no real investment in the future of farming are also much more likely to use the land for other purposes, such as leasing the mineral rights to energy companies for fracking or building giant wind farms. These landowners would also be more likely to work with third party labor contractors, who make it very difficult to enforce wage and hour laws.

Of course, the facts that the banks are eying farmland probably won’t surprise most small farmers, who are already up against enormous challenges caused by consolidation in the food system. And, as the U.S. Department of Agriculture’s latest ag census reminds us, mid-sized farmers are already on the wane. But this trend could widen the divide even further.

“These owners have no relationship to the land, which is a shame given the number of movements out there filled with people who want to go back to the land but just don’t have access,” says Mittal.