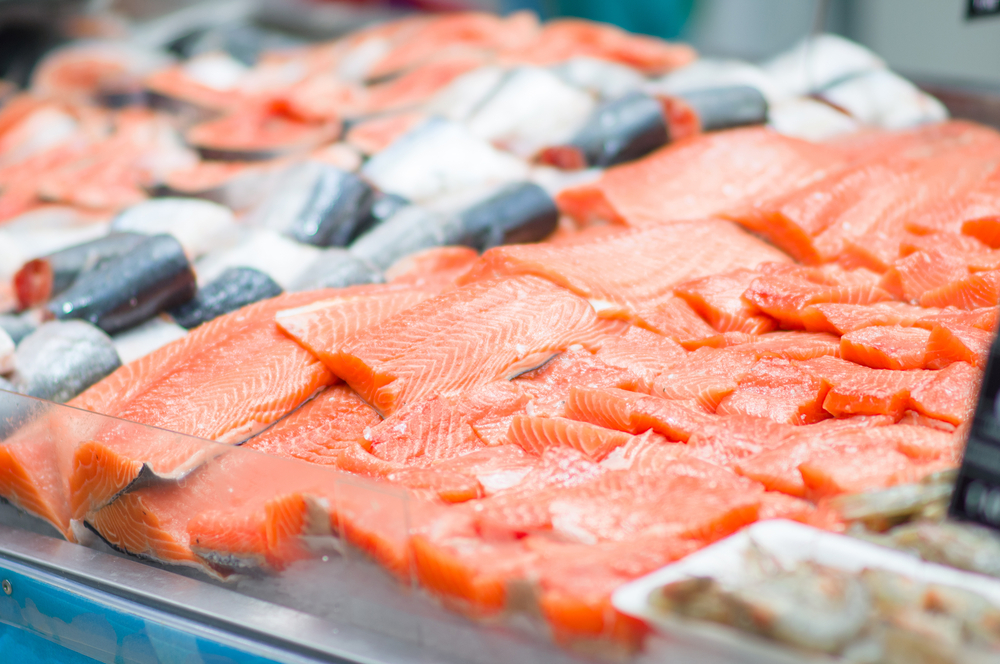 Normally, news that Costco is test-marketing a new farm-raised salmon wouldn’t exactly make headlines—but this fish tale is different than the others.

This is the story of a salmon that has the potential to move the aquaculture industry away from the practice of using wild-caught forage fish as food for larger species—a practice that concerns both environmentalists and scientists. Species like anchovy, sardines, and menhaden are the very cornerstone of the ocean’s food web. Too much pressure on these important stocks could have profound ripple effects if we continue scooping them out of the ocean to feed farmed fish.

But to get there, Verlasso, the company behind the salmon, is embracing genetically engineered or genetically modified (GM or GMO) technology. Unlike AquaBounty’s GMO salmon, which has been genetically altered to grow quickly in cold water (and is held up in the FDA rule-making process), the genetic engineering here is happening only to what the fish are being fed.

Verlasso is a joint venture between ag-chemical giant DuPont and farmed-salmon giant AquaChile. They’ve developed a genetically modified yeast—one that carries genes from an Omega-3 producing algae—which has dramatically reduced the company’s reliance on forage fish as a component of the salmon’s diet. (It isn’t on the label.)

The industry term: “Fish In : Fish Out” is the ratio used to describe how much wild seafood (usually in the form of fish oil) is needed to produce one pound of farmed fish. For traditional farmed salmon, that number is about 3:1. All in all, around 50 percent of the world’s fish oil [PDF] goes to feed these fish. Verlasso’s ratio is closer to 1:1, an achievement that helped earn it a “good alternative” rating in August by the Monterey Bay Aquarium’s Seafood Watch program—the first for a farmed Atlantic salmon raised in ocean net pens.

Pete Bridson, aquaculture manager at Seafood Watch, says Verlasso’s ability to reduce their reliance on forage fish was important, but wasn’t the only factor. Pens are stocked with fewer fish, which means there is less effluent impact (think: fish poo) to the water as well.

“The yeast is only replacing some of the fish oil. It’s not a complete solution, but it helps,” says Bridson. “And, [Verlasso] was very open to letting us see what they were doing, and monitoring their data, which was helpful too.”

Verlasso’s toehold in Costco’s seafood department could be huge. It’s the second largest retailer in the country, and is one of the largest sellers of salmon in the U.S.

Costco declined our request for an interview, but Verlasso Director Scott Nichols tells Civil Eats that over the next few weeks, they’ll be selling sides of Verlasso salmon in 16 Costco  stores in and around the San Francisco and Los Angeles areas, where the fish will appear alongside the store’s Kirkland brand farmed-salmon.

Much of that store-brand likely comes from Verlasso’s partner, AquaChile.  The two companies have had a long relationship, which helped pave Verlasso’s entry into the retailer.

In 2011, Costco stepped up their seafood sustainability policy, and agreed to stop selling 12 species of wild fish that were considered “red listed” by environmental groups. But in its yearly Seafood Sustainability Scorecard, Greenpeace placed the big box retailer a middling 13th place out of 20—in part, because it hasn’t kept pace with changes being implemented by other retailers.

Who has the top spot on the Greenpeace list? Whole Foods.

But despite Verlasso’s yellow rating from Seafood Watch, and its smaller reliance on forage fish, you won’t find it for sale at Whole Foods.

Verlasso and Whole Foods did have some exploratory, informal conversations in 2011 when Verlasso began to sell salmon on the market, but the talks never reached the point where Verlasso entered the store’s formal audit process. As I reported for TakePart last year, the grocer’s strict seafood guidelines for farmed seafood (you can read them here), include a preference for raising native fish and prohibits the use of antibiotics, a concern also raised in the Seafood Watch report.

While some consumers will likely be put off by the fact that Verlasso’s fish are eating a genetically modified ingredient, consider this fact: If you’re eating farm-raised salmon, it may already have been fattened on GMOs. Genetically modified soybeans are already being promoted as a sustainable alternative to fish oil, while some companies are exploring algae-based solutions and even insects.

Still, not everyone is convinced this is the right way to go.

“It’s notable that they’re trying to use GMOs to solve a systemic problem,” says Patty Lovera, assistant director at Food & Water Watch. “The same tactic being used in agriculture is now being used in aquaculture. In this case, they’re adding a GMO product to an open water environment; these salmon farms are not contained.”

One thing is clear: Reducing our dependency on forage fish is critical as we move towards more and more aquaculture production. By 2030, a whopping 62 percent of the fish the world consumes will come from aquaculture, according to a World Bank report released earlier this month.

Verlasso’s genetically modified yeast may not be the panacea to all of aquaculture’s woes, but if it can help keep more forage fish in the oceans where they’re desperately needed, perhaps it’s something to chew on.