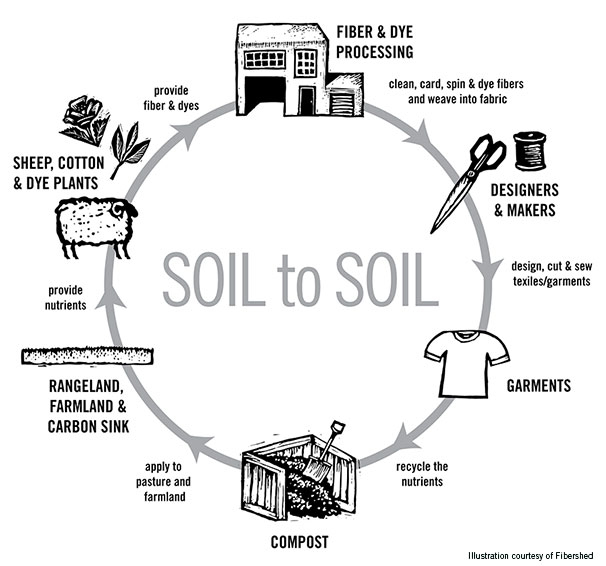 Many of us will ante up the extra dollar or two for sustainable food, or food that we believe closes the gap between producer and consumer, knowing that where we spend our money has power. But how does that approach apply to the other things we consume?

I haven’t stepped foot into a fast food chain in nearly 10 years, but my food values are easy to forget when there’s a sale at The Gap and I want a ridiculously adorable pair of skinny jeans for my toddler.

That’s why the story of Fibershed–a California-based project aimed at localizing clothing and reminding consumers of its ties to agriculture–is so important. What started in 2010 as one woman’s personal effort to wear only clothes that were made, dyed, and grown from fiber within 150 miles for a year, has since grown into a movement. (There are now 17 affiliate Fibershed groups in nearly a dozen states, as well as several international locales.)

Fibershed’s approach to connecting all of the spokes in the wheel of the supply chain, from farmers, to artisans, to consumers, has also resulted into a marketplace. Rebecca Burgess, the project’s founder, has become somewhat of a DIY heroine, who continues to speak out about the plight to change clothing industry. 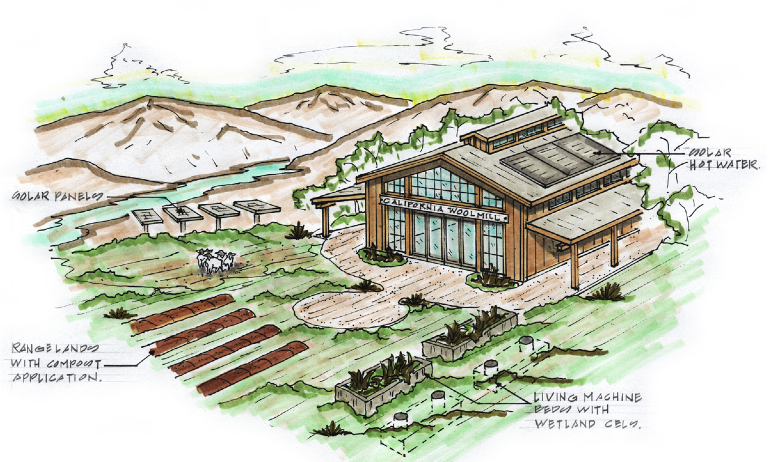 But ultimately, what really drives home the possibility of making this field-to-fiber concept a reality is Burgess’ vision of a domestic wool mill. In fact, she and several of her cohorts have just released the California Wool Mill Feasibility Study to prove it can be done.

Since California is the largest wool producing state in the country (responsible for 3.1 million pounds a year), the team behind the study chose to focus the analysis there. At last month’s Ecofarm Conference, Amber Bieg, who conducted much of the assessment, delivered some pretty dire statistics.

Bieg said that “20 percent of global water pollution is from toxic dye runoff” and commented on the high percentage of plastic pollution from fleece microfibers that wash out in the laundry and end up in the ocean. She also pointed out that the vast majority of domestically milled fiber still travels to multiple countries throughout the production process. (There are at least nine steps to get from raw wool to fabric, for instance.)

Despite the fact that there has been a 90 percent decline in sheep herding in the U.S. since 1950, a recent New York Times survey indicated that 68 percent of consumers want to be able to buy products that has been made in this country. Connecting the dots from field to fashion, cutting down textiles’ carbon footprint, and getting back to a time in history when clothes lasted for years, would require a huge shift.

But Bieg and Burgess are optimistic that we can begin to transform our habits and production practices, much like we have begun to do with food. The goal, she said, is to go back to a “closed-loop system” of fiber production.

While it’s tough to know where to begin as a consumer, Fibershed’s feasibility study offers an exciting, replicable model. Using solar energy, living machines, compost, and rainwater catchment systems, the proposed wool mill would rely on a “soil to soil” cycle. The idea is to apply composted wool to rangeland, as a way to build soil. Sheep would then graze on that land, and their wool would be used to create the next round of local clothing.

Perhaps the most exciting discovery in the study is the potential for this rangeland to absorb carbon dioxide (CO2) as well. As the study explains: “Through compost applications and grazing management plans—the soils that sheep rely on can be made more resilient against the effect of drought and erratic weather, while simultaneously becoming carbon sinks.”

According to Bieg, the group also found that fabric made in the states can actually be made at a lower price, even if the cost to produce clothing beyond that fabric would cost more due to higher labor costs here than abroad. The study reports:

Manufacturing in California is becoming very attractive to apparel brands because of speed, quality control and more recently cost-effectiveness. Because of this, some large apparel companies are finding that they can produce in California with only a minimal price difference passed on to shoppers. “LA’s Single brand can turn around 800 silk print dresses for Neiman Marcus and Lord & Taylor in as little as two weeks, now that 90 percent of its production is done at home with only a $1/dress price difference, with quality control and timing much better (Los Angeles Times, 2011).” Large apparel companies used to have to move production offshore to stay competitive on price, but now because of price and quality competitiveness coming from domestic apparel production, they are able to offer consumers a competitive product.

The study’s authors also point out that wool itself–or “nature’s performance fiber”–is also growing in popularity. “This is evident in the growth of U.S. brands such as Smartwool, which has maintained an annual growth rate of 20-30 percent per year over the past ten years,” they write.

On the economic side, the wool mill would be set up as a multi-stakeholder co-op, improving the local communities involved in a direct way through employment opportunities for ranchers, mill workers, and designers. Next, Fibershed plans to test for market viability, then create a business plan for the wool mill and eventually design and build their vision. In the meantime, say the authors, “there is much work to support shifts in California ranching and farming practice to engage a shift towards soil restoration on our rangelands.”

And me? I’ll probably be more likely to think twice next time I see a sale at The Gap.