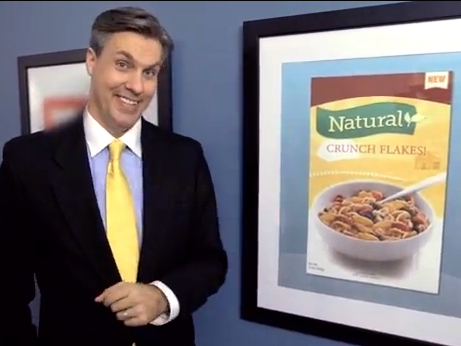 “Funny” isn’t the first word that comes to mind of when we think of the organic food industry. But a coalition of mid- to large-sized organic food companies—including Earthbound Organics, Stonyfield, Annie’s, and Organic Valley—hopes to change that. Here are a series of ads produced by the coalition, which has branded itself Only Organic, and hopes to debunk the use of the phrase “all natural” on processed food labels. (It’s worth noting that although the words “all natural” is still appearing on many food labels, a number of recent lawsuits have prompted companies like PepsiCo to use words like “simply” instead.)

Meanwhile, Chipotle has taken the idea of parodying Big Food executives and their marketing machines much further with an actual Internet-television series called Farmed and Dangerous. Chipotle’s director of marketing has described it as “values-integration rather than typical product-integration,” and the brand itself will be absent from the show’s credits.

Farmed and Dangerous presents a cast of characters led by an agribusiness giant who sets out to create a product called Animoil. And as with its animated viral videos, Chipotle claims that the goal of Farmed and Dangerous is more about general awareness of factory farming than it is about selling burritos. Of course, that hasn’t kept the company from sending out press releases that have garnered it high-profile media attention for the series.

On the one hand, it makes a lot of sense to engage a generation that gets most of its news from Comedy Central this way. And laughter can be good medicine in the face of an industrial food system that can seem as if it is growing bigger, more consolidated, and more powerful every day.

But there’s also a danger in parodies. They can run the risk of making our most pressing problems seem even more absurd, and therefore less real. It’s not so different than the way films like The Day After Tomorrow fail to make anyone truly respond to climate change because they put it safely in a category with alien take-overs.

To its credit, the Only Organic ad does offer one of the most efficient explanations of genetically engineered corn around: “Scientists were recently able to take the genes from bug-killing bacteria and cross them with the genes of corn to make the corn pest-resistant! It’s true, totally true. You can Google it.” And the lead actor could have been pulled straight from the cast of The Office.

Will it reach an audience that doesn’t already buy organic food—especially when up against the powerful industry it’s parodying, with all its add dollars (i.e., the actual guys in suits)? I guess we’ll have to stay tuned to find out.