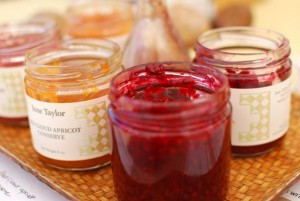 Last December, the New York Times offered a list of words for the dumpster, tired and worn-out terms ready for retirement in 2014. Topping the list was “artisan,” a term used in the marketing of products ranging from small-batch pickles and preserves to Tostitos tortilla chips and Starbucks sandwiches.

Regardless of mainstream attempts to co-opt the label, a truly artisanal food movement—based in craft, community, tradition, and innovation—is alive and kicking. For these businesses, growth is not something to take lightly; it’s a delicate dance between staying true to one’s values while adapting to new economies of scale.

On January 13th, CUESA, Kitchen Table Talks, and the Good Food Awards co-hosted a panel discussion with three successful artisan business owners, posing the tough question, “How big is too big in artisanal food?” Moderator Marcy Coburn of the Oakland-based Food Craft Institute grilled panelists on what it means to be an artisan and how to grow with integrity in an expanding, and sometimes dubious, “artisanal” market. Sue Conley, co-owner of Cowgirl Creamery, a cheese-making business based in Petaluma and Point Reyes, and Elias Cairo, salumist at the Portland charcuterie maker Olympic Provisions, represented the larger end of the artisan spectrum, with upwards of 80 employees each. On the microbusiness side was June Taylor of June Taylor Company, who has been making small-batch preserves “seven jars at a time” in Berkeley for 20+years, with the help of only two employees.

What does it mean to be an ethical, sustainable, and viable food artisan in today’s world, and how do consumers distinguish the real deal from the impostors? Beyond a dedication to their craft, certain themes emerged among the panelists as principles they won’t compromise on:

Commitment to local farms and community. All three businesses source directly from their local foodshed, and they develop strong relationships by paying a fair price. “As we started scaling up, we really tried to support the farmers off the bat,” said Cairo, noting that all of Olympic Provisions’ pork now comes from a Mennonite family farm in the Northwest. Cowgirl gets all the milk for their cheese from Straus Family Creamery and a couple other small organic dairy farmers in their area, while June Taylor directly sources 90 to 95% of her fruit from California famers—never from outside the U.S.

Flexibility and creativity. Much like farmers, small food makers are often vulnerable to the vagaries of nature, but Taylor uses these challenges to hone her craft. She changes her offerings depending on what fruit is available, and she has learned patience and flexibility from the resilient farmers she sources from. “The personality to stay with your product after you see it destroyed…it’s just amazing,” she said. “I have to take that same attitude [with my own product].”

Transparency and education. These artisan producers got their start selling at farmers markets, and they continue to rely on direct marketing to educate and connect with their customer base, even as sales grow through online, retail, and wholesale channels. Cowgirl Creamery regularly hosts tours to open up their creameries to their community. That kind of transparency is key, according to Conley. “It’s honest. You really understand how [the cheese is] made, who made it, where the cows are from, what kind of cows, what kind of pasture…these are the things that make it a good cheese.” Hands-on quality control. As small companies grow, there may be a temptation to outsource some of the production to keep up with demand through practices such as co-packing. If such relationships are not overseen or managed responsibly, quality can suffer. “We’re completely copacker-free,” saidCairo proudly. “We make every single product that’s on our line.” Cowgirl and Taylor also make all their own products.

Employee health and respect. How big is toobig? For Cairo, it’s “as soon as I see that tipping point of miserableness at my meat plant—of people not respecting and loving what we’re doing.” He regards his workers as his family, noting that he’s only lost one employee in five years of business. Paying workers well, offering health insurance, and ensuring a respectful, fun, and rewarding work environment are essential to his business’ mission and health.

Innovation in moderation. Does “handcrafted” preclude technology? As Conley pointed out, much of small-scale production is hard, repetitive work. “I think we can mechanize parts of our production in the future that would allow us to get bigger and be more fun,” said Conley. “We’re hand-packing [our cheese], and it’s really hard. I think there are ways to take the backbreaking part out.”

Passing on their craft. Give someone a jar of preserves and they will eat for a day. Show them how to preserve food and they will eat for a lifetime. Developing skilled workers and educating the public are ways to extend the fruits of one’s artisanal labors. Taylor offers classes in her workshop, The Still-Room, and has dreams of one day turning it into a youth learning center. “I’ve dedicated 25 years of my life to this craft,” she said. “If nobody came up and did it in the next generation, it would be a real waste.”

Collaboration, not competition. As support for handcrafted food grows, is there room for more truly artisanal businesses? “There’s a spirit of ‘the more the merrier,’ and if we’re all identified as a bloc, it’s much more powerful,” said Conley. Through Cowgirl’s cheese shops, she and her business partner Peggy Smith have helped to foster identity and connections for small cheese producers throughout their region.

As Taylor put it, “We have to break down this massive operational style of thinking about food into smaller units. The more small companies that grow, the better.”