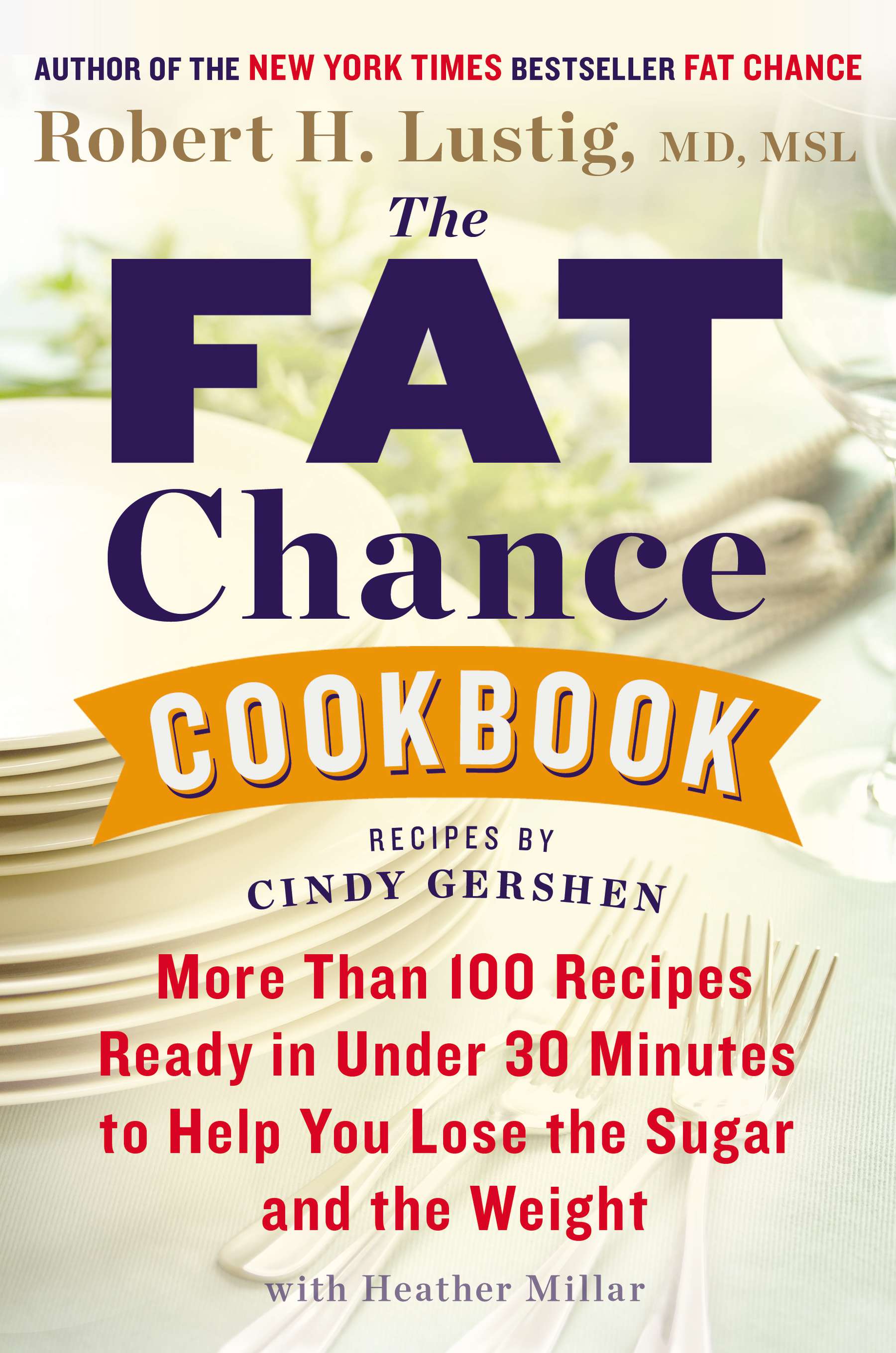 As a follow-up to his best-seller Fat Chance: Beating the Odds Against Sugar, Processed Foods, Obesity and Disease, Robert Lustig’s new The Fat Chance Cookbook is a natural outgrowth of his mission to help curb the obesity epidemic and teach people, especially kids, to cook simply and healthfully at home and rely less on processed foods.

For the cookbook, Lustig teams up with Cindy Gershen, a restaurant owner in Walnut Creek, California, who met Lustig long before he became the well-known anti-sugar crusader he is today.

Lustig tells the story of how he and Gershen met while he was giving a talk to doctors in Northern California on the obesity epidemic in 2006. Gershen, who was at the talk with her husband, a pediatrician, peppered Lustig with questions on every scientific point he made as a means of validating her own weight loss experience.

Although Gershen was hearing Lustig’s message for the first time, she had already lost weight by eliminating sugar and flour from her diet, a method that Lustig espouses. “By doing exactly what I have been talking about, she has lost 100 pounds and kept it off for 15 years,” Lustig said in a recent phone interview.

Lustig’s fundamental message in Fat Chance is that being optimally healthy and maintaining a healthy weight depends on one key factor: Keeping our insulin levels low. The only way to do this is to eat a diet low in sugar and to cut back on refined grains and flours. According to Lustig, the elimination or reduction of processed foods from our diets results in a dramatic decrease in our insulin levels, as most products on grocery store shelves contain high amounts of both sugar and refined grains.

Gershen is living proof that this tactic works since she has maintained a healthy weight for the past 15 years without struggling with the “yo-yo” effect of typical diet regimes. Lustig and Gershen have been friends ever since that initial meeting and Gershen went on to create a non-profit called Wellness City Challenge to promote healthier diets in Contra Costa County.

She also teaches healthy cooking at Mount Diablo High School in Concord, California, an underserved school with high rates of obesity and Type II diabetes. “Every single recipe in the cookbook has been vetted by a Mount Diablo high school student to be preferable and consumable within a high school period,” Lustig told me. “This is not a gourmet cookbook; this is a cookbook to teach kids how to cook.”

The book starts off with an introduction about why cooking is so important in the face of our highly processed modern food landscape. Lustig also debunks some common health and food myths like why eating foods labeled “low-calorie” and “low-fat” won’t work for weight loss.

He definitively states, “a calorie is not a calorie” and explains the basics of the insulin response that occurs when we eat a diet that is high in sugar and refined grains and low in fiber and high quality protein, writing: “You will jack up your insulin levels big-time. That drives energy storage into fat cells, makes fat in your liver, and makes you feel very tired as your energy is diverted away from your muscles and brain.”

Since Lustig’s message is all about the quality of the food and not the quantity, he never counts calories, nor does Gershen, and the point of their cookbook, he says, is to get Americans cooking delicious and healthful foods without worrying about “all the things you can’t have.”

But, I wondered about sugar. Given Lustig’s dire warnings about the toxicity of it, I expected to find nary a trace of sugar in this cookbook—but there’s actually a section in the book called “Scratch Baking” and these recipes do indeed use sugar. In fact, Lustig says sugar comes in at a distant third as the most obesogenic food—the first two are potato chips and French fries.

“Sugar is a cause of obesity, not the cause,” he writes. So does Lustig eat dessert? “When I’m in New York, I have a piece of Junior’s cheesecake. When I’m in New Orleans, I enjoy bread pudding with whiskey sauce. Other than these kinds of dalliances, I’m pretty careful,” he writes.

In the Scratch Baking section, you’ll find recipes for carrot cake, zucchini bread, and chocolate chip cookies, but they’ve cut the sugar by about one half to one third of a normal recipe and Lustig says you’ll never notice the difference. You’ll also find recipes for breakfast, lunch, and dinner that seem easy, healthful, and tasty.

I was a bit surprised though to see recipes that call for low-fat milk, non-fat yogurt, vegetable oil, canola oil, margarine, and Egg Beaters—products I recommend avoiding (less processed whole foods, like full-fat dairy, olive oil, coconut oil, butter, and whole eggs are superior) and there are quite a few recipes made with refined sugar and white flour, which seems counter to the science that Lustig so diligently outlines in Fat Chance.

I asked Lustig how he reconciles the use of refined sugar and flour with the message he espouses and he wrote in an email, “Virtually every recipe in the book has been adapted to make it as unrefined as possible. But there are still desserts in there. And they are OK—once a week. Just not every meal.”

Indeed, the overall message of the cookbook is that we should only eat sugar and refined grains in limited amounts—sound advice since it’s not realistic for most people to eliminate them entirely. And the bottom line is that if more Americans began cooking at home with recipes like the ones Lustig and Gershen outline in this book, we’d be off to a very good start. 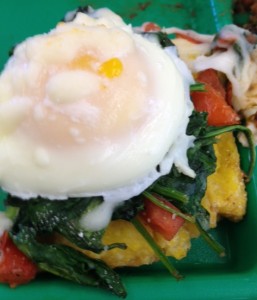 Step 1: Remove the polenta from the loaf pan and cut into 6 slices, each 1/4 inch thick
Step 2: Heat 1 tablespoon olive oil in large pan over medium-high heat. Add polenta slices and fry until golden brown on both sides, about 3 minutes per side. Transfer polenta slices to a plate and keep warm.
Step 3: Add the remaining 1 tablespoon of oil to the pan and saute the greens until wilted or tender.
Step 4: Heat 2 inches of water just to a boil in a separate medium-sized frying pan, add the white vinegar, then reduce the heat to low. Crack the eggs into the water and poach them until desired doneness, 2 to 3 minutes for soft yolks. Using a slotted spoon, remove the eggs from the water, being careful not to break the yolks. Transfer eggs to a plate.
Step 5: Place a polenta patty on each of six plates. Top each patty with greens and a poached egg. Pour salsa over all. Or, place all the polenta slices on a platter, top with greens, poached eggs, and salsa.

In the southern United States, they call this “corn grits”, but in Italy, where Cindy’s mother’s parents were born, they call it “polenta”. It’s basically a grain mush or porridge that’s been eaten since Roman times. Today it’s most commonly made with cornmeal, but barley and other grains were used in the past.

Polenta is still a carb, but because it’s ground coarsely, it maintains a lot of its original fiber. In other words, it’s not refined. It’s a much better choice than a standard refined carb like white rice or potatoes. If you buy the commercial versions instead of making it yourself, the sodium content will be significantly higher.

When served, fresh polenta has the homey consistency of mashed potatoes. Once it cools polenta hardens into the shape of whatever holds it. Then is can be sliced or fried and used in endless ways.

Step 1: Bring the water and salt to a boil in a large pot over high heat.

Step 2: Once the liquid is boiling, slowly add the grits or cornmeal, stirring constantly with a whisk to keep lumps from forming.

Step 3: When the grain is mixed smoothly into the liquid, reduce the heat to low and simmer gently for 30 minutes until very thick. Stir occasionally to keep the polenta from sticking. Serve exactly as you would serve oatmeal: with milk, fresh fruit or nuts, raisins, and cinnamon.

Use firm Roma tomatoes, they’re less watery than other varieties. This can be used cold or hot.

Mix the tomatoes, garlic, basil, oil, balsamic vinegar, pepper, and salt together in a bowl. The salsa is best when used immediately.