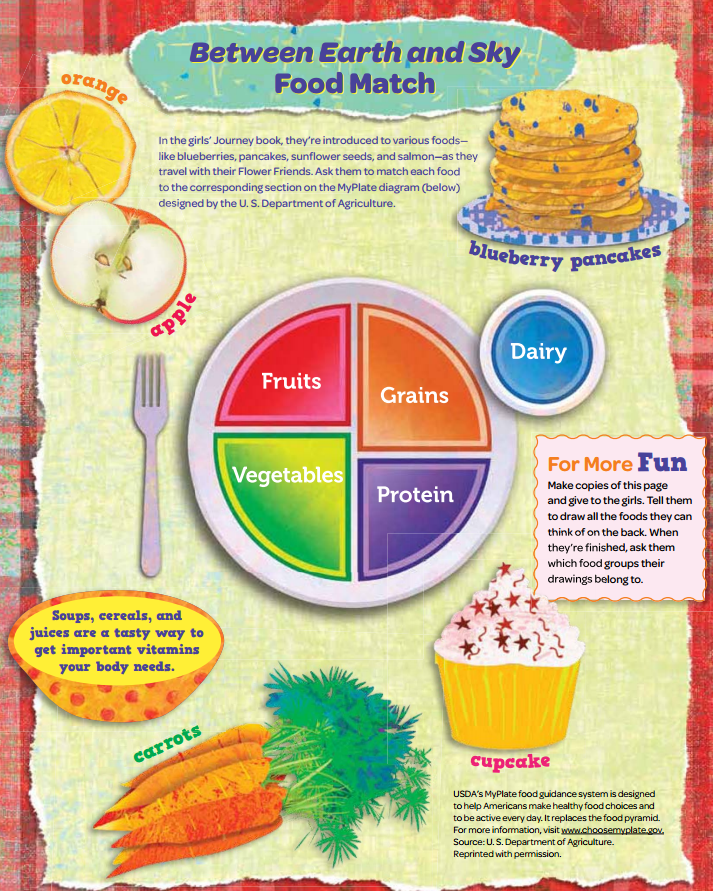 As of 2012, 53 percent of elementary schools and 12.5 million students are being taught about food and nutrition by the food industry, in part via an industry-created course called “Energy Balance 101.” Their message? “If kids eat more, they shouldn’t forget to exercise more, too.”

It may seem benign, but the message does not address the many variables contributing to the obesity crisis—and it reinforces that obesity is caused by being lazy, while seeming to shirk the fact that the problem has anything to do with the food industry’s products or practices.

Clearly, the message of “eat less” is not in the food industry’s best interest, and so perhaps not surprisingly, “eat less” messaging is not a significant part of Energy Balance 101. Instead, from as young as five-years-old, students are taught that “energy balance” works almost exclusively in one direction.

From the perspective of the food industry, a focus on “energy out” is not only explicable, it’s essential. By focusing on exercise and energy out, the food industry’s products and advertising practices are exonerated from contributing to childrens’ growing weights, while simultaneously food industry sales are protected.

They’re also taught that, “Without energy from food and beverages, they could not do all the things they love to do!” and “When we eat or drink something, the calories change in our bodies to energy. Calories are important. They give us the energy we need to function each day.”

While these statements are technically true, their focus on the merits of calories from a nutrition perspective really isn’t necessary. Of all the nutritional deficiencies today’s standard American diet may contribute to, calories are certainly not among them; with underweight occurring in less than four percent of Kindergartner through Grade 8 students. This in stark contrast to the now near 20 percent of children who are burdened with overweight or obesity.

So what else will your Kindergartner learn about “energy-in” in an Energy Balance 101 lesson? They’ll learn that if for instance they’re planning on swimming more than usual they should think about, “What could you do to make sure your Energy In increases too?” They’ll also learn that if they sprain their ankle, that rather than choose less energy-in for “balance”, they should, despite their injury, “Find other activities to increase Energy Out.”

Not content to only target your children in schools, the HWCF recently launched a new partnership, this time with the Girl Scouts of America, where they’ll reach 1.7 million girls through their, “Healthy Habits” curriculum.  Lesson plans for Scouts as young as seven include such teachings as bananas are a healthful food choice because they’re full of energizing sugar, “Eat a banana! It contains three natural sugars: sucrose, fructose, and glucose, combined with fiber to give you an instant zap of energy.”

Ice-cream is pointed out to be a part of MyPlate’s dairy group, and Scout leaders for seven-year-olds are instructed to ask them, following 10 minutes of outside fun: “Did they feel their metabolism increase?” and later to take them through this interesting exercise: “Girls are asked to call out advertising slogans about favorite foods or drinks” and then to “suggest that girls create an ad for their favorite energizing snack.” 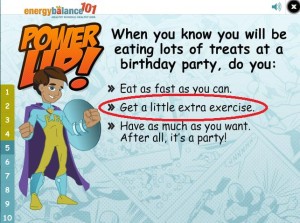 And if your young child decides to play the HWCF’s online “Power Up” game, they’ll see calories, painted as a literal superhero, and will be provided with such advice as, “If you’re looking for a little extra energy you can get some from foods and drinks” and that exercise balances the energy-in of treats in a jiffy, “When you know you’ll be eating lots of treats at a birthday party”, you should, “get a little extra exercise.”

The food-industry friendly curricula doesn’t stop with just energy, it also delves into nutrition and as you might imagine given the authorship, it’s very clear about whether or not there are “good” or “bad” foods. Teachers are taught:

It may be easy or natural for students to relate food choices as “good” or “bad” in this exercise. You will want to ensure that students understand that no foods are “good,” or “bad,” and that all can fit into a sensible, balanced diet using moderation!

Interestingly, just as there are no “bad” foods, it would also seem that there are no bad nutrients as the Energy Balance 101 lessons on how to read a food label explicitly exclude teachings on how to interpret the nutrition fact panel’s trans-fats, sodium and sugar values, through their online child targeted “Cool Tool” called “Anatomy of a Food Label” explains, “trans-fats are formed when liquid oils are made into solid fats like shortening and hard margarine,” without any reference whatsoever to their well-established  risks or the FDA’s recent call for their ban.

Unfortunately, when it comes to a primary focus on “energy-out” as a means of preventing or curing childhood obesity, the medical literature is disappointing. As far as prevention goes, one extremely objective UK study which used accelerometers to measure activity in 212 elementary school boys and girls for four years found that even those children who were 10 times more measurably active than their peers did not see their increased activity translate into protection against weight gain.

In regard to cure, a second objective accelerometery study found that even in schools providing an astonishing nine hours a week of structured physical education, kids’ total daily activity levels remained constant when compared with the activity levels of kids in schools providing only 1.8 hours a week. This surprising and counter-intuitive finding led researchers to speculate that, akin to a thermostat, kids’ activity levels are set, and interventions geared to increase them may simply lead to a redistribution of activity (if they were more active in school they were less active at home and vice-versa) rather than to a net increase.

That when it comes to weight management managing both sides of the energy balance equation is important is a fact that even school children should know. They should also know that “balance” is a misnomer in that while exercise is indeed one of the most important things a person can do to protect their health, we simply can’t outrun our forks. Most experts posit that energy-in is responsible for 70-80 percent of our weights, and energy-out, only 20-30 percent.

Instead our impressionable children are being taught that calories are wonderful packets of energy that make us superheroes, that there are no “bad” or unhealthy foods, and that if we choose to indulge a little in foods that are “fun!” for energy then all that’s required is a “little extra” exercise, our children are effectively being taught that societal weight struggles, both adult and child alike, are wholly consequent to people being too lazy to move.

They’re not being taught that obesity is related to our ever increasing reliance and use of restaurants, highly processed foods, sugar-sweetened beverages, poor school food and school food policies, nutritionally backward crop subsidies leading to the ubiquitous reach of cheap unhealthy calories, the use of candy to pacify, reward and entertain our children at every turn, or to the food industry’s predatory marketing practices. In short our kids are being taught the food industry friendly mantra that if they’re fat, it’s purely their own damn fault.

Truly, none of the aforementioned lessons and teachings should come as a surprise to anyone, after all, what else would you imagine the likes of the Coca-Cola Company would want to teach your children? What is surprising though is why America has asked and given permission to the food industry to do so.

Yoni Freedhoff, MD, is an assistant professor of family medicine at the University of Ottawa, where he's the founder and medical director of the Bariatric Medical Institute—dedicated to non-surgical weight management since 2004. Dr. Freedhoff sounds off daily on his award-winning blog, Weighty Matters. Dr. Freedhoff's latest book, The Diet Fix: Why Diets Fail and How to Make Yours Work, will be published by Harmony Books March 4th, 2014. Read more >