7 Powerful Ways Students are Fighting for Food Justice this Spring 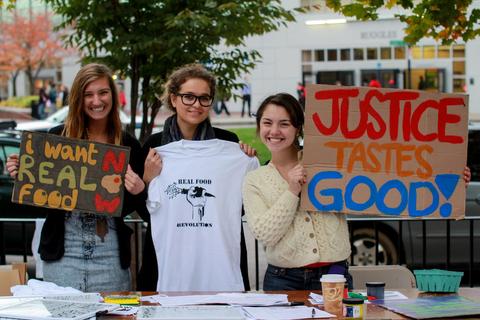 Last week, The Daily Meal published their list of the “50 most powerful people in Food for 2014.” Who made the list?

Hugh Grant, CEO of Monsanto
Indra Nooyi, CEO of Pepsi
Doug McMillion, CEO of Walmart
…and it goes on.

Really?!  Here at Real Food Challenge, we know that real power lie in people’s movements for change.  Who are these powerful changemakers?  Here is our list:

Twenty-three campuses. 500,000 students. $100,000,000 spent on food each year.  Statewide, students are calling on the Board of Trustees to adopt a policy that ensures access to healthy, fair and sustainable food for all students.  This “Real Food for CSU” campaign is gaining steam: Students have gathered hundreds of petition signatures, traveled to give testimony at every Board of Trustees meeting, and begun direct discussions with university policy architects.  If they’re successful, it could mean over $25 million in annual purchases shifted away from industrial agriculture and toward smaller, local, organic, and unionized farms and food manufacturers.  This is one big campaign to watch! 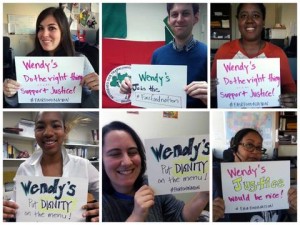 2) Wendy’s: Your Burgers Might be Square but your Food Ain’t FAIR!

Did you see the news?  Recently, the Coalition of Immokalee Workers convinced the single largest tomato purchaser in the country, Walmart, to pay a “penny more per pound” for tomatoes and join the CIW’s Fair Food Program. Now, students are calling on Wendy’s–the ONLY fast food restaurant not already signed on to the Fair Food Program–to get with it!!  If this next move is anything like the CIW’s past campaigns, Wendy’s better watch out!

Last year, student activists campaigned with cooks and cafeteria workers at American University to win paid sustainability training, whistleblower protection for workers who speak out about unsafe or mislabeled food, and a new committee for workers to give input about sustainable food initiatives. When the university unexpectedly shifted cafeteria contractors, the food on the loading dock started to look a lot less like the real food they had organized for. This year, students and dining workers are teaming up again to analyze the university’s food purchases with the Real Food Calculator, to learn what’s really coming off the loading dock and where there are opportunities to get more fresh, local, fair food and from-scratch cooking on campus. 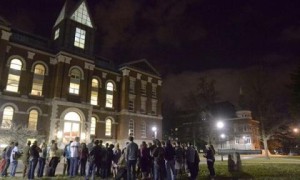 4) The Talk of Kentucky–UK’s Contract Fight

Last year, when the University of Kentucky threatened to privatize UK Dining Services, UK United Students Against Sweatshops swung into action, working with campus and community allies to support their in-house dining services, which currently purchases almost $1 million worth of Kentucky products and employs over 700 people. By securing open more community forums, and holding demonstrations, this coalition of the students, faculty, staff, farmers, alumni, and community members have succeeded in delaying the outsourcing process for over nine months. They also won language in the Request for Proposals that asks the bidding companies to retain 114 full-time employees with the same salaries and benefits, to continue purchasing local and sustainable food, and to expand academic collaboration with academic programs including the College of Agriculture!

The final decision on outsourcing is coming soon–either way, the coalition will continue organizing to ensure good jobs, local food sourcing, and educational opportunity are protected for the campus and community.

The U.S. has been secretly negotiating a massive new free trade agreement (the Trans-Pacific Partnership, or TPP) that would cover 40 percent of the world–advised by 400 corporate “trade advisors” with little to no input from civil society. The TPP threatens basic labor rights, food safety, environmental regulation, Internet freedom, and any chance at regulating Wall Street by privileging new international corporate-friendly standards over democratic state and federal laws. The good news? United Students for Fair Trade and dozens of other groups (350.org, AFL-CIO, etc.) are fighting back! Through community teach-ins, media outreach, marches to congressional offices, and other creative direct actions, students are spreading the word, and the movement for fair trade policy is growing.

This last year students at Point Loma Nazarene University voted in favor of increasing tuition by $3 a semester for a new “Fair Trade Fund.” To win this referendum, students from the PLNU Fair Trade club worked to enroll a wide range of on-campus organizations, including the Associated Student Body and the PLNU Board of Trustees.  The new fund will provide funding for on-campus Fair Trade purchasing and awareness projects and controlled by a diverse board, that’s 51% students. Get ready for more of these unique referenda popping up across the country!

Real Food Challenge campaigns are taking off at schools like Bard College, The New School, Northeastern University, Auburn University, and Saint Louis University–all schools contracted with Chartwells Dining Service.  Students are now working with their campus allies to convince the company’s corporate office–a subsidiary of the 20+ billion British-owned Compass Group–to sign a National Supply Chain Transparency Agreement.  If successful, Chartwells would be able to offer unprecedented level of transparency and openness to both students and it’s clients eager to learn more about the sources of their food.