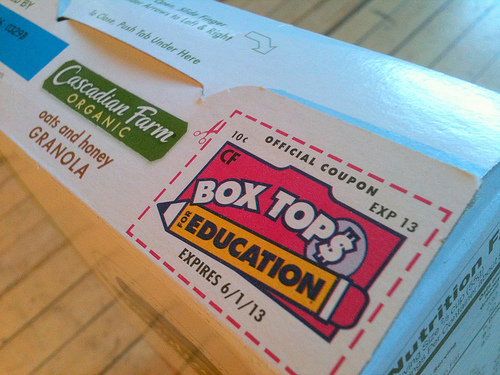 The enactment of policies to curb marketing to children has been, to put it mildly, an uphill battle in the United States. While television ads and billboards are the most blatant examples, the more subtle–yet just as pervasive–variations are the most troubling.

Earlier this month, the Journal of the American Medical Association published an editorial by Dr. Jennifer L. Harris and public health dietitian Tracy Fox titled, “Food and Beverage Marketing In Schools: Putting Student Health at the Head of the Class.” In it, the authors write that “marketing in schools is one tool in the food companies’ diverse toolbox to encourage children and adolescents to consume their brands and recruit lifelong loyal customers.” They note that the school environment provides “an optimal setting” for companies to reach youth and that marketing in schools “implies the school’s endorsements of the products.”

Box Tops for Education–much like Coca-Cola’s Coke Rewards program–is the epitome of cause marketing: Tie your (largely unhealthy and highly scrutinized) brand to a good cause, while encouraging individuals to buy your products; the more, the better. On the Box Tops for Education Web site, for instance, one tip is to “always send your Box Tops to school in bundles of 50.” Yes, 50. In other words, “buy 50 boxes of Lucky Charms so your child’s school can get five dollars.” General Mills often has special offers, too, like providing 100 bonus box tops when 15 eligible products are purchased in one transaction.

Let’s do some math. At one of my local grocery stores, a 12-ounce box of Lucky Charms retails for $2.89, which means that one must purchase close to $150 worth of cereal to receive a donation of five dollars–three percent of that total–to their local school. For what it’s worth, General Mills sometimes tacks on extra Box Tops to certain products (i.e., plain Cheerios), so that one item provides four box tops, likely a marketing tactic to boost sales for products in need of a boost.

Schools can use the money from these box tops for a variety of purposes, such as purchasing playground equipment, computers, books, or musical instruments. What’s not to like? Well, several things. First and foremost, this is a marketing boon for General Mills. Last week, blogger Pamela Kropf tweeted me this photo of a note sent by her daughters’ elementary school in El Dorado Hills, CA, which is offering a doughnut party for the classroom in each grade that submits the most Box Tops (the note emphasizes “Big G” cereals, which include Cookie Crisp, French Toast Cinnamon Crunch, Golden Grahams, Lucky Charms, and Reese’s Puffs). These are the same hyper-processed, minimally nutritious cereals that General Mills deceptively claims are healthier than fruit due to lower sugar content.

New York University Paulette Goddard Professor of Nutrition, Food Studies, and Public Health Dr. Marion Nestle understands why the food industry is so keen on these sorts of programs. “You have to love cause marketing. Get kids to demand that parents buy sugary cereal boxes so they can collect the box tops to be used to buy school equipment,” she tells me. “The schools may get the equipment but the winner here is the cereal company. It sells more boxes and generates great goodwill among kids, parents, and schools, all of them thoroughly distracted from the effect of the products on health.”

Michele Simon, president of Eat Drink Politics and author of last year’s report, Clowning Around with Charity: How McDonald’s Exploits Philanthropy and Targets Children, also sees an incongruence between General Mills’ cause-washing efforts and its more nefarious efforts at keeping consumers in the dark. “This program is very similar to how McDonald’s exploits children’s philanthropy through Ronald McDonald House Charities for selfish gain,” she says. “While General Mills aims to distract and impress, the company targets children with candy cereal and keeps consumers in the dark about their products that contain GMOs.”

Above all, these sorts of efforts put a temporary band-aid on a much deeper crisis–the increasingly disappearing federal funding for public schools. The educational environment should not serve as a blank canvas for food industry advertisers. While Box Tops for Education may appear to be a philanthropic effort, it is yet another example of industry’s incessant and predatory–and worse, school-sanctioned–marketing to children.