How Will the TPP Affect the Food System? | Civil Eats

How Will the TPP Affect the Food System? 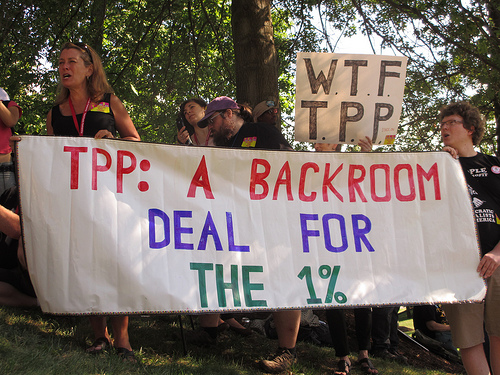 If you’re like me, you’ve known for a while that the U.S. is negotiating a new trade deal called the Trans-Pacific Partnership (TPP), but you haven’t taken the time to figure out exactly why it matters. Hey, I don’t blame us—there’s a reason it’s hard to understand: The corporations and governments negotiating the deal don’t want our opinions slowing down their shiny new free-trade agreement.

In fact, if everything goes as planned, very few of us—not reporters, only a handful of legislators, and certainly not you or me—will get to read the deal before it is signed into law. But recently there have been some big hiccups in that plan, making me think it is actually possible to stop this thing if we all start paying attention right now.

In case you missed it, last November the TPP ran into opposition from both the House of Representatives and Wikileaks. I figure it’s time to weigh in on how we think the TPP will impact food and farming. So, let’s dig in…

Let’s start with the basics: The TPP is a free-trade agreement between the United States and 11 other countries in the Pacific region. It’s similar to NAFTA in that it creates specific rules for all the governments involved to decrease regulation of trade, making it easier for multinational corporations to invest in new markets and sell products abroad.

One scary similarity between these two trade agreements is that they both set up a mechanism for corporations to sue governments if profits are disturbed by government regulations. This provision is called “Investor-State Dispute Settlement” (ISDS).

Agreements like NAFTA and the TPP essentially uphold the lowest common denominator in terms of worker and environmental protections as the desirable standard, opening up a wide range of domestic laws, protections, and policies to challenge by foreign investors.

If you’ve heard anything about the TPP, you may have heard that there’s a measure on the table to “Fast Track” the entire agreement—the controversial Camp-Baucus bill—introduced on January 9.

Fast Track approval means Congress hands over its negotiating power to the executive branch. This is how the U.S. has handled several of our previous trade agreements, including NAFTA—and it means that only the Obama administration and its committee of (mainly corporate) advisers would see the full trade agreement before it’s approved.

Opposition is growing to this method of negotiations. Recently, two “Dear Colleague” letters opposing Fast Track approval circulated in the House of Representatives—with signatures from 173 representatives. It was a surprising mix of Democrats and Republicans.

Who knew that the issue to bring together both sides of the aisle in this dysfunctional Congress would be government transparency?! Voices from the Senate are beginning to object as well. Senator Warren (D-MA) wrote to President Obama voicing her deep concern, pointing out [PDF]: “If transparency would lead to widespread opposition to a trade agreement, then that trade agreement should not be the policy of the United States.”

The latest specifics we do know about the TPP come from last summer’s Wikileaks release of the Intellectual Property chapter. In it, we see a not-surprising theme of prioritizing profits over human need, dramatically demonstrated by the language on drug patent law.

As the current draft stands, the TPP would dramatically undermine the ability of several countries to provide access to life-saving medications, and according to Doctors Without Borders [PDF], would “severely restrict access to affordable medicines for millions of people.”

And the food system?

Agricultural policy is woven throughout the TPP and if Fast Track stays in place, we won’t get to read most of it until it is too late.

We did see one glimpse of ag policy in the intellectual property chapter: The TPP would require all involved countries to allow animal and plant life to be patented. We also know that the chief U.S. agricultural negotiator for the TPP is none other than former Monsanto lobbyist, Islam Siddiqui.

Knowing how Monsanto has viciously sued farmers over their Genetically Engineered (GE) seed patents and poured millions into fighting domestic GE labeling efforts, we can make an educated guess about Siddiqui’s TPP agenda.

The TPP would include a NAFTA-like elimination of virtually all tariffs on U.S. agricultural products, which could lead to commodity dumping and the subsequent dislocation of small farmers from their lands. Food safety rules—including rules about pesticide residue levels, labeling of GE ingredients, or limitations on additives—could be challenged under the Investor-State Dispute Settlement (ISDS). ISDS is a provision in major free trade agreements that allows companies to sue governments when local laws disrupt trade and profit.

We can look at how transnational corporations are using the ISDS provision in NAFTA to predict how the TPP court system will protect “investor rights.” In case after case, foreign corporations—including several of the Big 6 pesticide makers—have sued host governments for tightening environmental regulations or subsidizing local production. And in many of the cases, the corporations won multimillion dollar payouts.

We know enough not to support trade negotiations behind closed doors. And Congress has an opportunity to oppose Fast Track, today. It’s an important start.

An earlier version of this post ran on Ground Truth, the Pesticide Action Network (PAN) blog.

Linda Wells is the Associate Organizing Director at Pesticide Action Network North America (PAN). She brings nearly a decade of organizing experience with environmental and economic justice issues including running campaigns to protect endangered ecosystems through marketplace campaigns with ForestEthics and as a co-founder of the nationwide Hand in Hand — the domestic employers association, which seeks to create fair working conditions for domestic workers. As part of her dedication to strong multiracial movements for justice, Linda has served on the leadership team of the Catalyst Project’s Anne Braden training program for white social justice activists; and she is a graduate of Green Corps, the field school for environmental organizing. Linda is a fourth-generation Iowan from Davenport. She is based in Minneapolis and provides support to PAN partner organizations and communities, particularly in Iowa and Minnesota, as well as helping to lead PAN's organizing staff. Read more >