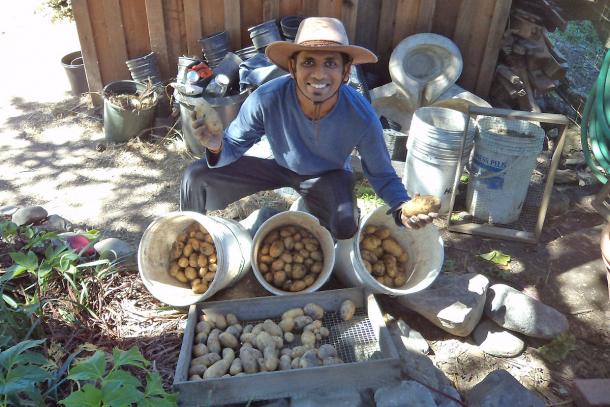 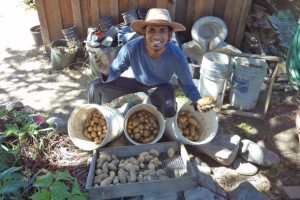 Lauren Augusta realized the need for sustainable agriculture exchange while working at a conventional agriculture training program, where she observed the detrimental effects of agrochemicals on the land and farmers’ health. “I loved the idea of cross-cultural exchange, but I ultimately couldn’t defend the agricultural model my old program promoted,” she says. “I was increasingly alarmed by the unjust and disconnected farming practices I witnessed.”

In 1997, Augusta founded Multinational Exchange for Sustainable Agriculture (MESA), based in Berkeley, California, to connect food and farming change-makers worldwide, while spurring innovation and preserving traditional knowledge. MESA provides international training for farmers and advocates at sustainable farms and organizations to build ecosystem stewardship, fair food economies, and cross-cultural collaboration. Programs are offered in the United States, Peru, and Thailand and soon in Mexico and Sri Lanka.

The program integrates experiential training with an online curriculum and awards a Certificate in Global Agroecology and Local Food Systems under a U.S. State Department designated Training and Cultural Exchange Program. Over the years, MESA has connected more than 1,250 people from 33 countries and helped start approximately 140 small farms and food justice projects. The U.S. Core Training Program begins with an orientation at an organic farm in Northern California. Program participants, called “stewards,” apprentice at one of many host farms located all over the country. During their stay, stewards learn about organic, biointensive, biodynamic, and permaculture production, as well as marketing and community organizing. Many stewards receive scholarships, while host farms help cover lodging, stipends, and training costs. MESA also provides financial support and mentoring training to hosts via on-farm project grants.

“One of the most wonderful things about the stewards is that we learn a ton from them,” says Dru Rivers of Full Belly Farm in Guinda, California, who has been a MESA host for eight years. “For example, one of the stewards was a young woman who grows flowers in Ecuador, and we learned so much about flowers and her country while she was here.”

After staying at their host farm for six to eight months, the stewards travel back to San Francisco for the final part of their training, which includes a tour of the Ferry Plaza Farmers Market with CUESA staff.

Stewards from Around the Globe

The 2013 group of 19 stewards hailed from all over the world: Ecuador, Sri Lanka, Peru, Thailand, Ghana, France, Georgia, Mexico, and the U.S. Many stewards are in their 20s or 30s, although there are no age restrictions for applicants.

“I am continuously amazed at how much people change from orientation to exit,” Atwood observes. “When you are exposed to a different culture and different ways of thinking, you can gain a new frame of reference for your own value system and our global interconnectedness. It can be a transformational experience.”

MESA steward Sanjana Silva (pictured at top), an agricultural extension officer and activist from Sri Lanka, trained at Ecology Action in Willits, California, where he learned Grow Biointensive farming. “We are depleting soil rapidly,” he says. “At Ecology Action, I learned how to grow soil, not just food.

Aspen Kvicala (pictured at right) from California trained in the Sacred Valley of Peru. “My experience seeing how community and agriculture can thrive together was eye-opening,” she says. “I’ve now started my own farm, Foolish Hens, and am working to instill the community and cooperative values I learned in Peru.”

Isabel Quiroz (pictured below) from Aguascalientes, Mexico, trained at the Golden Rule Garden and Ecology Action. At home she works in community development, creating gardens to empower women and reduce violence. “The MESA experience was incredible, much more than I expected,” she says. “I never felt as supported as I was here.” She admits that she felt resentful of the U.S. before she visited because its policies hurt Mexico. “Now my concepts of the U.S. people have changed completely, and I have new hope.”

When the stewards return to their home countries, 50 to 60 percent work in food production and marketing, 20 to 30 percent work in advocacy, education, or policy, and 10 to 20 percent work in other areas. Steward alumni can apply to MESA for Sustainable Project and Innovation Grants (SPRIG) to fund projects in their countries. Many such projects have focused on bringing the lessons they’ve learned back home through farmer trainings, demonstration plots, farmers markets, CSAs, and community outreach. Many life-long professional relationships and friendships have developed between hosts and stewards. Quiroz describes her experience living with stewards from five countries: “We shared our food, music, and dance. I shared the best of my culture with them and also learned about their cultures.”

“A huge part of our work is building a network of global citizens,” says Atwood. MESA collaborates with international partners, including universities, NGOs, and community organizations dedicated to sustainable food systems. “Stewards and hosts are part of a grassroots network that shares challenges and solutions, and works together to create local change as a global community.”

Contact with this global network through the MESA program leaves an indelible impression on hosts back in the States. Fully Belly Farm’s Rivers has particularly appreciated the stewards’ positive impact on her family. “We have four children and they have grown up eating meals with stewards around the table,” she says. “Rural people often aren’t exposed to lots of cultures, so it’s been really important to have MESAinterns in our homes. Our children have learned a lot from the experience.”