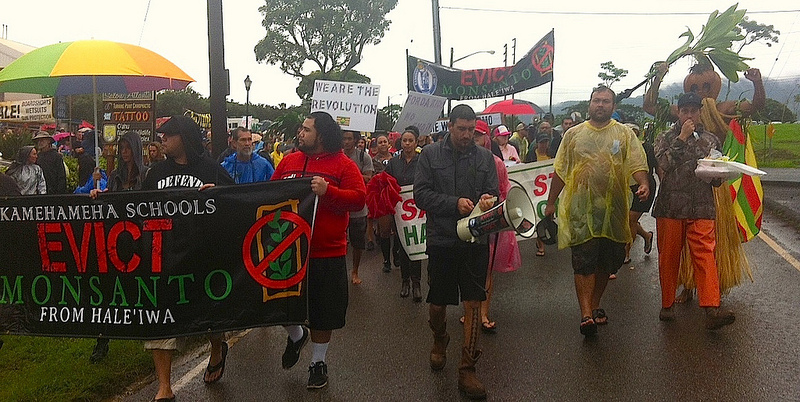 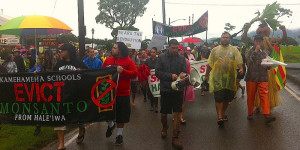 Sporting a motley mix of rain gear, some 700 people trickled into a 7-Eleven parking lot on the south end of town by noon. Among the crowd were most of the key figures involved in the fight against the GMO companies in the Hawaiian islands — from grassroots activists, to politicians, to Hollywood stars, to pro-surfers and locals from the beleaguered west side of Kauai island. Many had flown to Honolulu in the morning and made the hour-long drive across the island to the North Shore despite the heavy downpour.

“The rain hasn’t stopped us before,” said Nomi Carmona, president of Babes Against Biotech, a group that works to oust legislators who receive funding from biotech companies and one of the organizers of the “Ahola Aina March: Collaboration for a Better Tomorrow.”

“I haven’t done a whole lot of protesting since my college days, but I came out because this is important — it’s about our food,” said Mike Smola, a local art historian. “Its ridiculous to have bioengineering experiments in a closed ecosystem like this island.”

With its green-blue water and massive winter waves, O‘ahu’s North Shore is best known as a surfing mecca that hosts the international Triple Crown of Surfing competitions every December. The last big one — the Billabong Pipeline Masters — was held here on Saturday. But this part of the island is also where the biotech companies have thousands of acres of GM crop fields. Biotech giant Monsanto, for instance, leases more than 1,000 acres of land around Hale‘iwa from Kamehameha Schools, a private trust that owns about half of Hawai‘i’s farmland.

Which is why the organizers — a coalition of community and food rights groups including, ‘Ohana O Kaua‘i, Hawaii SEED, Hawaii GMO Justice Coalition, and The Mom Hui — chose to hold the event in Hale’iwa, the biggest town in the North Shore. The idea was to tap into the momentum of the international surfing competition, which draws a lot of media attention, and raise awareness about GMOs and Big Ag. The “Michael Jordans” of the pro-surfing world — stars like Kelly Slater and John John Florence — had been promoting the march during the past week, and they and several other pro-surfers turned up for the Sunday march.

“GMO is probably the most talked about issue in the pro-surfer world right now and that’s because most pro-surfers have made their careers here on the North Shore and they don’t want to see it polluted,” said Kyle Thiermann, founder of Surfing for Change and 2011 Brower Youth Awardwinner, who was filming the march for a short video documentary he’s making on the issue. 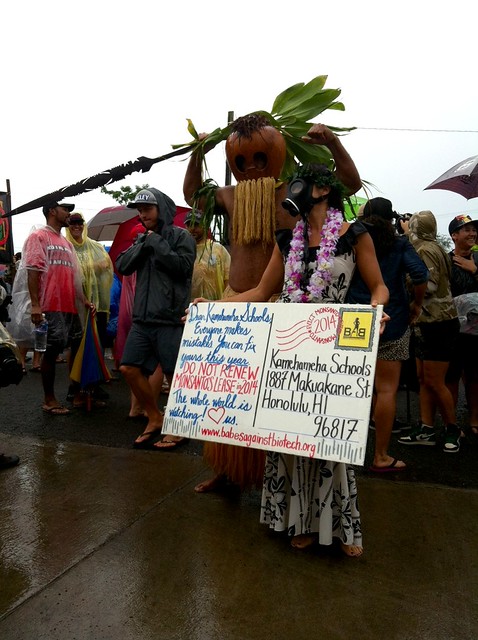 Monsanto leases more than 1,000 acres of land around Hale‘iwa fromKamehameha Schools, a private trust that owns about half of Hawai‘i’s farmland.

The goal of the event was to march a mile down the Kamehamehea Highway to the Hale’iwa Beach Park for a rally and non-GMO potluck party with some live music and dancing thrown in.

There was some confusion in the beginning, with the local department of transportation pulling the march permit because of unsafe weather conditions and a power outage that took out traffic lights. But the organizers decided to press on anyway.

“Walk safe,” advised Dustin Barca, a pro-surfer turned activist from Kauai and one of the key organizers of the march. “Let’s keep it respectful but let’s make some noise!” And after a round of prayers and a resounding blow of the conch, off they set down the wet highway, chanting, “A’ole, a‘lole, a‘ole GMO! Monsanto has got to go!”  (“A‘ole” means “no” in Hawaiian)

The local police, after a failed attempt to deter the marchers, helped out by closing off part of the highway and diverting traffic. As the marchers proceeded down the road, passing cars honked in support and people from the stores and restaurants along the single-lane road stepped out to wave and join the chanting. The rain slowed down to a drizzle and gradually petered off by the time the marchers reached Hale’iwa Beach Park.

“For me the ua [rain] that came down upon is a blessing,” said Ellie Cochran, the Maui councilmember who introduced a GMO regulatory bill on her island two weeks ago. Water, said a clearly emotional Cochran, “cleanses” and “purifies” and that’s just what Hawai’i needs right now.

In the past year Hawai‘i has turned into ground zero for the battle over genetically modified organisms. There’s been a growing groundswell of grassroots opposition against the five big biotech companies — Monsanto, Syngenta, DuPont, Dow Agrochemicals and BASF — that have been expanding their operations here, occupying tens of thousands of acres of former sugar and pineapple plantation lands to grow and test transgenic seeds. Hawai‘i currently has the largest number of experimental GMO crops in the United States.

The islanders’ pushback against GMO companies came to a head in the past month when the island councils of Kauai and Hawai‘i (also known as Big Island) passed bills to regulate the industry.  Much of this movement is centered around the Hawaiian idea of “Aloha ‘Aina” — or “love for the land — and the growing concern that their land, and health, is being affected by these companies’ heavy use of pesticides. 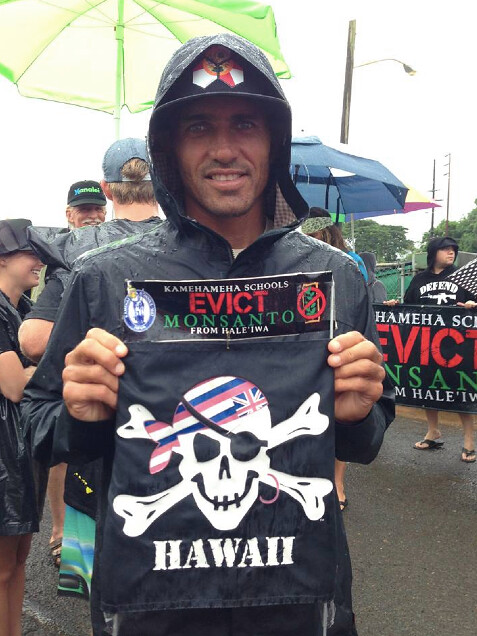 Pro-surfing stars like Kelly Slater, who made their careers on the North Shore, have been supporting the cause. Photo courtesy Hawaii GMO Justice Coalition

“Our generation took on the US military and we won because of Aloha ‘Aina — which has nothing to do with negativity and has everything to do with passion and love and respect, and that’s what this younger generation is doing now,” veteran Hawaiian political activist Walter Ritte, who had been involved in the effort to wrest the island of Kahoolawe from the control of the US military in the 1970s, told the Journal. “It is difficult to do this [organize a united movement] here because it’s expensive to travel between the islands, but we have taken the movement to each of the islands and shown that it can be done.”

But Ritte acknowledged that marching, “while good for the soul, is not going to get us where we have to go.”  The anti-GMO movement must get involved in electoral politics, he said.

Continued public support of legislative efforts to regulate the biotech industry will be crucial once the Hawai‘i state legislature begins its new session in January. There’s already some talk of the state government introducing legislation that could nullify the Kauai and Big Island bills.  (From 2007 to the current filing period, the biotech industry and its lobbyists have spent at least $515,775 on campaign contributions in Hawaiian legislative, gubernatorial, and county council elections, according to a Babes Against Biotech analysis. The state government here is heavily pro-Big Ag.)

“It’s our job to make sure that county bills not only not get preempted, but become more powerful,” Ritte told the gathering at the beach later.  “I’m pleading with all of you to register to vote. Your vote is your spear. It’s your weapon to fight the corporations.”

There is also the possibility of the biotech companies suing the Kauai and Big Island county governments on the grounds that the new laws unfairly target their businesses. “These are some cutting-edge issues that the courts have never seen before, so it’s going to be interesting,” said Paul Achitoff a Honolulu-based attorney with the environmental law firm EarthJustice. “This is all kind of new right now. A few years ago the state was controlled by industry, but now there are more things like this [march and regulatory bills] happening. It’s all in a state of flux.”

This post originally appeared on the Earth Island Journal.