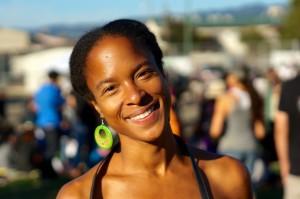 While just one percent of Americans abstain from eating animal products, veganism is gaining ground in the U.S. Jay-Z announced recently that he’ll go vegan for 22 days as “a spiritual and physical cleanse” and Al Gore recently decided to go vegan, which some speculate is a way to reduce his carbon footprint. These are just two examples of the personalities, products, and restaurants that are embracing plant-based diets, with health, animal welfare, and environmental concerns as common motivators.

Self-described “critical food geographer,” Dr. Breeze Harper, a human ecology research fellow at the University of California, Davis and founder of the Sistah Vegan Project, argues that our food choices are also linked with race, class, health, sex, sexual orientation, social justice, and freedom. What we choose to eat influences our relationships with others in the food chain, with ecological and social landscapes, and, fundamentally, with ourselves.

Sistah Vegan: Black Female Vegans Speak on Food, Identity, Health, and Society is a provocative collection of narratives, poetry, and critical reflections of black-identified female vegans in the United States edited by Harper. In its afterward, contributor Pattrice Jones describes the process of striving for integrity in our choices as “discordance leading to discomfort leading to change.”

Harper’s goal is not for everyone to eat massaged kale salad, squash-lentil soup, and dairy-free cookies. It is to understand veganism as a way to address institutionalized racism, environmental racism, speciesism, ecological devastation, health disparities, overconsumption, and other manifestations of social injustice. Harper emboldens us to reexamine the relationships and ethics of the most ordinary—and seemingly innocent—things we eat, and to look beyond the binaries of “good” and “bad” choices within our complex commodity food system.

In 2010, Andrea King Collier wrote a terrific Civil Eats piece about why Harper started the Sistah Vegan Project and how Sistah Vegan helps deconstruct notions of veganism. This fall, I chatted with Harper. What follows is a shortened version of our conversation that was published in the winter 2014 issue of Bitch magazine, available online and in stores.

What sets Sistah Vegan apart from other approaches to veganism?

I’d like to say Sistah Vegan is not about veganism. It’s about using veganism as a platform to explore the intersections of structural racism, sexism, classism, and capitalism, and how it plays out in the lives of mostly black women.

When I first started the Sistah Vegan Project, it wasn’t, “How can we convince black people that veganism and animal rights are the way?” It was more about me turning the lens onto whiteness. I noticed that mainstream rhetoric around veganism was very “postracial”—they didn’t consider things like the ongoing significance of structural racism, as well as socioeconomic class or geographic privilege on one’s vegan philosophy and consumption habits.

[Now it’s about creating a] platform to develop critical pedagogies of consumption. For example, if you look at how tomatoes are accessible to the North American consumer year-round through NAFTA, [and] you understand that NAFTA is contingent upon structural racism, sexism, and poverty, then you develop a literacy around commodities and capitalism. [You can question how] you maintain this as a person in the commodity chain who’s a vegan consumer. Even if you think what you’re doing is “cruelty free.”

September’s Sistah Vegan Conference discussed alternative foodways and health strategies to address race-based health disparities and injustice. How do these strategies speak to decolonizing our palates, bodies, minds, and spirits?

Just like there are many feminisms and they don’t all necessarily agree with each other, there’s no one set decolonial practice. For me, it’s questioning how capitalism has colonized our minds. Depending on what type of situation you’re in, most of us have given up that agency to so-called experts who don’t care about our health and care more about profit.

I remember there were times when I didn’t understand that certain things—like dandelions, nettles, and burdock—are not actually weeds. What are the politics of naming something a weed, and how do these social constructions benefit biopharmaceuticals? What does it mean for me to decolonize my mind and realize these are really cheap, accessible holistic herbs that I can use in place of toxic and damaging things that women or young girls are taught to consume when they have menstrual cramps? That I can do chamomile over Advil? Just thinking about these things is what it means to decolonize.

From that point, looking at my own specific geographical, social, financial location, how do I start to make myself healthy in a way that doesn’t support neoliberalism and neocolonialism? Which, of course, is not 100 percent [achievable] because by default, just being here, I do benefit from those systems. I think it’s about mindfulness and awareness: being aware of the extent I should take care of my own needs, but also not exploiting others, the environment, and nonhuman animals. I’m trying to find that balance.

How can mainstream veganism do better when it comes to intersectionality?

There’s a lot to be learned from the vegan hip hop movement. There are several black male vegan hip hop activists, such as DJ Cavem Moetavation, SupaNova Slom, and stic.man of Dead Prez, who talk about decolonizing our communities and our bodies. In part, they’re talking about veganism, but they’re also connecting it to all these other things, like that black and brown communities have more instances of pollution and environmental degradation because of racism and classism.

How can those who are not black-identified or vegan be a Sistah Vegan ally?

It doesn’t matter how you identify, whether you’re vegan or not, black or not. It’s important to leave your comfort zone and understand that you can learn from any experience, whether you agree with it or not. Ask, how does my particular social, racial, or geographic situation uphold certain structures and powers? What does that say about me, my access to food, and what I think is a healthy living situation? Sistah Vegan is not about black women vegans, it’s about using the platform of veganism to explore all those issues.