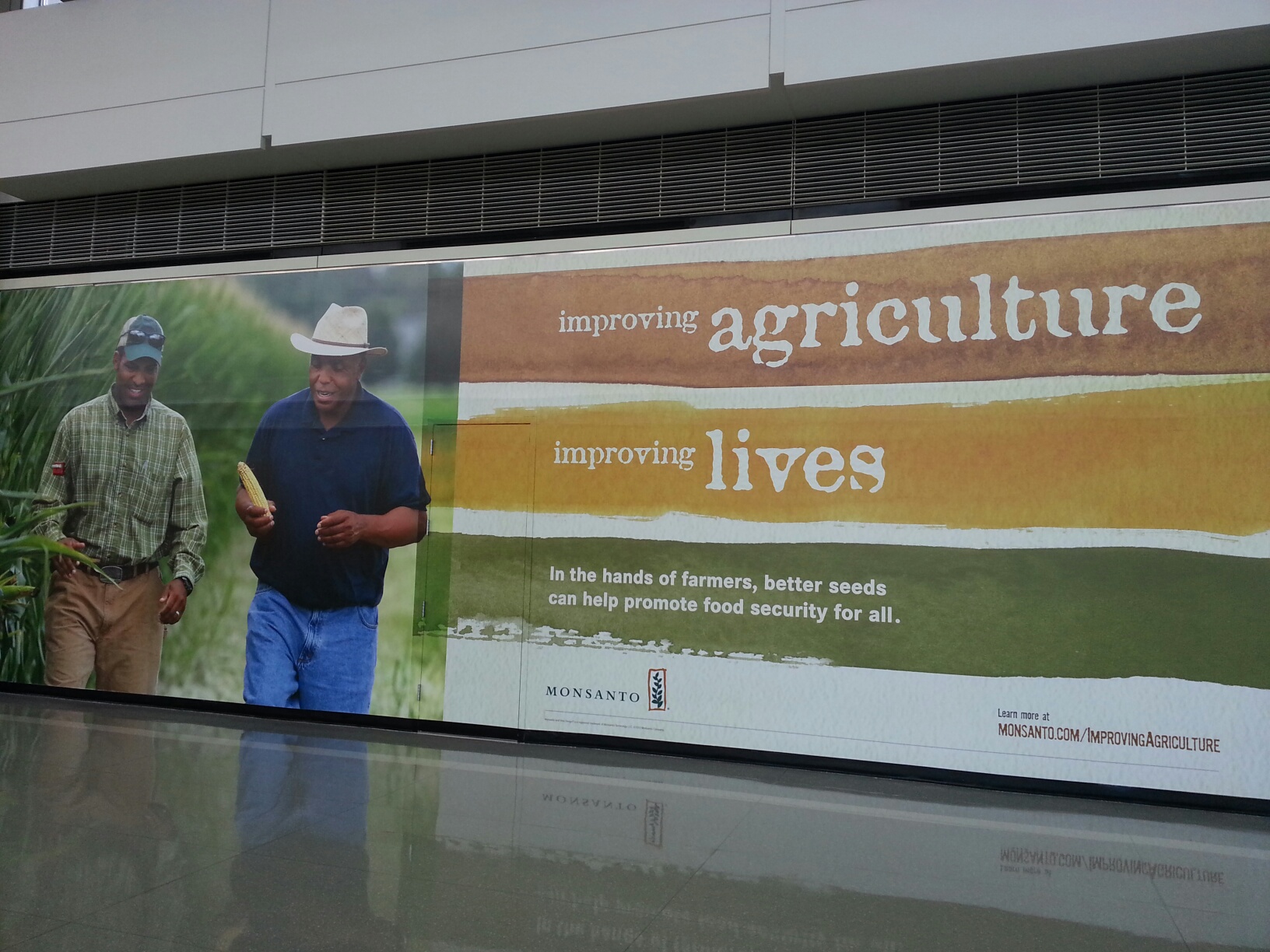 So now the Monsanto Company thinks its bad reputation with the public is primarily an air time problem. As the agribusiness giant’s Chief Technology Officer (and recent World Food Prize winner) Robert Fraley told Politico recently, Monsanto has been “absolutely riveted and focused on giving technology and tools to farmers to improve their productivity and yield and we haven’t spent nearly the time we have needed to on talking to consumers and talking to social media.”

This is a company that spends, on average, $100 million per year on advertising. The past few years, it seems I can’t go to an airport (see cover photo) or ride the subway without seeing larger-than-life farmers smiling down at me from Monsanto’s ads. In 2011, the Business Marketing Association named Monsanto “Business Marketer of the Year.”

The company has a blog and an online news portal, and they put out press releases nearly every day. They’re on Facebook, YouTube, and Twitter and I just counted no fewer than 37 official tweets from Monsanto just in a recent 24 hours.

Still, the company has concluded that it must do more to get its message out, including shaking up its communications staff and hiring a heavyweight PR firm to manage the company’s image.

But any new charm offensive, however well-managed, can’t overcome the fact that large agribusiness interests—Monsanto prime among them—stand as a major impediment to a healthy, sustainable food and farm future. And as UCS documents last week, this company’s responsibility for the latest problem facing farmers across the country—so-called superweeds—stands in stark contradiction to the warm and fuzzy public image Monsanto is trying to cultivate.

A new policy brief from the Union of Concerned Scientists, The Rise of Superweeds—And What to Do About It, tells the story of how Monsanto’s wildly popular “Roundup Ready” system of engineered corn, soybean, and cotton seeds and herbicide has accelerated the predictable tendency of weeds to develop immunity to weed-killers, causing major headaches for farmers. A recent survey found that more than 60 million acres of U.S. farmland are infested with Monsanto’s superweeds—that’s an area roughly the size of the state of Michigan.

My colleague Doug Gurian-Sherman wrote at length previously about better weed control solutions from the science of agroecology. From planting cover crops to rotating more crops, these science-based practices are more effective and sustainable over the long term, and can even help farmers increase their profits.

Sadly, the communicators at Monsanto apparently haven’t heard this news. Maybe someone should take out an ad in their boardroom.