Human Rights and a Burger Giant 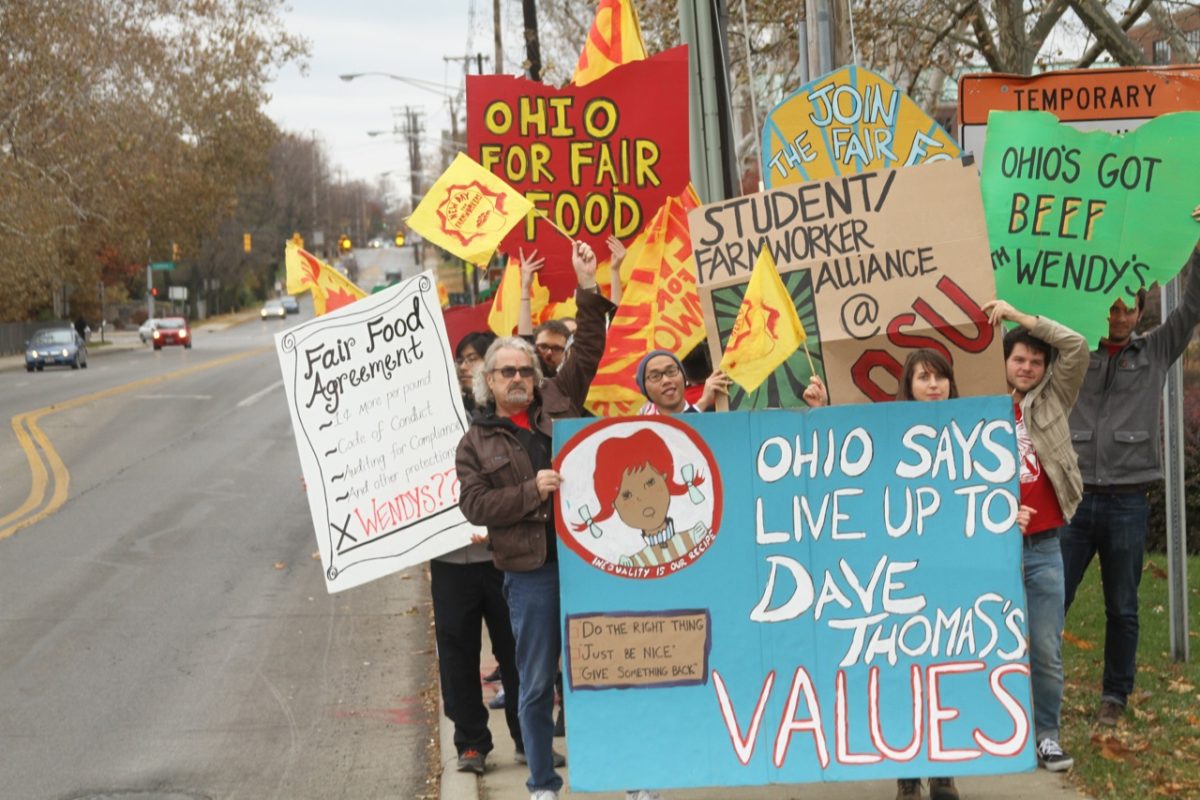 In 1993, six farmworkers gathered in a local Catholic church in Immokalee, Florida, two hours northwest of Miami. Seated in a circle of folding chairs, they began to recount the human rights abuses they had suffered and witnessed while working in the tomato fields of Florida.

One of the farmworkers produced a nondescript booklet and began to read from the U.N. Declaration of Human Rights, a set of basic human rights that the nascent Coalition of Immokalee Workers would look towards when designing their own Code of Conduct to end the abuses faced by farmworkers.

Today, as we celebrate International Human Rights Day, the anniversary of the day the United Nations adopted the Declaration of Human Rights, we recognize the Coalition of Immokalee Workers, who, from their modest beginnings, has become one of the human rights giants of our time.

Through their worker-designed Fair Food Program–a historic collaboration between farmworkers, 11 food retail corporations, and the majority of Florida tomato growers–an agricultural industry based on respect for human rights is becoming a reality. Just last week, the Coalition, along with the Fair Food Standards Council, presented its real-world solutions to human rights abuses to over 1,700 delegates from 85 countries at the United Nations Business and Human Rights Forum in Geneva.

While 11 leading retailers are paying a small premium to lift workers’ wages and have committed their purchasing power to demand human rights standards, there has been one notable exception: Wendy’s. Supporters of the Coalition around the country have made sure Wendy’s hears, loud and clear, that they’re on the wrong side of history. In a recent week of action against the burger joint, hundreds of people took to the streets in dozens of cities nationwide, from Columbus, Ohio to Jacksonville, Florida.

As Wendy’s looks to establish a more “sustainable” brand and sourcing of “honest ingredients,” the food justice community–from writers and farmers to retail workers and students–has rallied together up and down the supply chain to let Wendy’s know that farmworkers must make up an integral part of that vision. Today, as we reflect on the commitment to human rights that we have made as a global community, we ask that Wendy’s seize this opportunity to join the Fair Food Program.

Below is the letter which I have signed, along with many of my colleagues in the food movement, including movement leaders, writers, chefs, small farmers, and food justice organizations.

As food writers, chefs, small and family farmers, sustainable businesses leaders, anti-hunger groups, and food justice advocates, we are writing to express our grave disappointment that Wendy’s has thus far refused to join the most far-reaching, successful, and comprehensive program for social responsibility in the US produce industry: The Fair Food Program.

When Wendy’s founder Dave Thomas opened the first Wendy’s store, he outlined values that would anchor the Wendy’s brand, such as “Do The Right Thing,” “Treat People with Respect,” and “Give Something Back.” Today, the eyes of the growing food movement turn toward you to ask that you uphold these guiding values upon which Wendy’s has built its image.

As such, we urge you to act immediately to ensure that the rights and dignity of farmworkers who harvest the tomatoes sold in Wendy’s products nationwide be respected by committing your company to a social responsibility program that was recently heralded in The Washington Post as “one of the great human rights success stories of our day.”

While Florida farmworkers have long faced stagnant, sub-poverty wages and egregious human rights violations–in the most extreme cases including modern-day slavery–the good news is that a solution now exists. Through the Coalition of Immokalee Workers’ (CIW) Fair Food Program–an unprecedented partnership among 11 major corporate retailers (including all of Wendy’s main competitors), over 90 percent of the entire Florida tomato industry, and farmworkers themselves–a more modern, more sustainable industry is being born.

The Fair Food Program was recently highlighted in a White House report concerning efforts to combat human trafficking as “one of the most successful and innovative programs” in the fight against modern-day slavery. Additionally, the U.N. Working Group on Business and Human Rights sent observers to Immokalee, reporting that the Fair Food Program “innovatively addresses core worker concerns” through an “independent and robust enforcement mechanism.” Most recently, the CIW was awarded the Roosevelt Institute’s 2013 Freedom From Want Medal, recognizing the unprecedented advances of the Program.

By refusing to put its weight behind this program, Wendy’s is lagging behind its competitors as the only major fast food corporation in the US that has yet to become part of this proven approach to a more sustainable supply chain. What’s more, when you, Mr. Brolick, helmed Taco Bell in 2005 as the company became the first Fair Food Program signatory, you stated at the time of the announcement, “We have indicated that any solution must be industry-wide… but we are willing to play a leadership role within our industry to be part of the solution. We hope others in the restaurant industry and supermarket retail trade will follow our leadership.” Now, eight years later, Wendy’s is “the rest of the industry” that needs to join the Program.

Until now, however, Wendy’s has publicly stated that it already pays a premium for its Florida tomato purchases and only buys from growers within the Fair Food Program. Such misleading statements do a disservice to Wendy’s brand and reputation.  As you well know, whatever premium Wendy’s may pay, it is unrelated to the Fair Food Program and does nothing to raise farmworkers’ wages. Moreover, the Fair Food Program works because it has teeth: Retailers commit to supporting farms that uphold a necessary set of labor standards and suspend their purchases from farms that are unwilling to comply. Only by joining its competitors in making that commitment can Wendy’s assure its customers that it is doing its part to ensure that farmworkers who pick its tomatoes are treated with dignity and respect.

Wendy’s promotes its sourcing of “honest ingredients” and its sustainable business practices, to which we as food justice advocates are also dedicated. But you must understand that today’s consumers expect and demand that farmworkers, whose work makes possible Wendy’s continued growth, also constitute an integral part of that vision. To portray your company as taking the necessary steps to uphold farmworker rights while doing no such thing–when a proven and verifiable solution exists–can only be described as disingenuous.

As Wendy’s looks to modernize its brand to position itself as “a cut above” their fast-food counterparts, it must understand that a new logo is insufficient to transform an old-fashioned approach to human rights.  Only a true commitment to just treatment of workers in your supply chain can assure Wendy’s of smooth sailing in the 21st Century. We within the food justice movement urge you to seize this moment as an opportunity to uphold those values and act immediately to join with the CIW and the Florida tomato industry in building a better tomorrow.

59.  Donald B. Clark, Network for Environmental & Economic Responsibility of the United Church of Christ; Cornucopia Network of NJ