Is Hospital Food Putting People in the Hospital? | Civil Eats

Is Hospital Food Putting People in the Hospital? 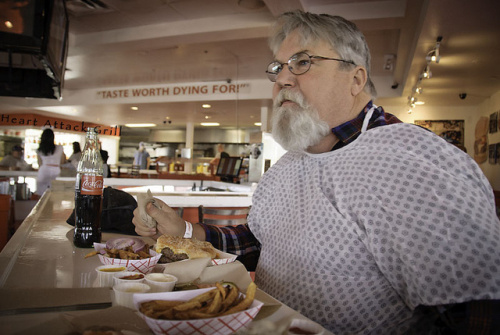 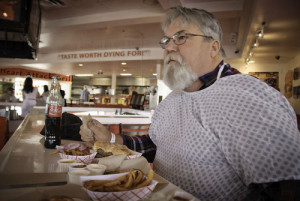 At least two-thirds of the U.S. adult population is either overweight or obese and that number is expected to increase to 75 percent by 2015. Childhood obesity is also widespread, afflicting 17 percent of U.S. children under the age of 18 (Wang and Beydoun, 2007).

While many factors can contribute to the development of obesity, perhaps one of the biggest is diet. With food playing such a large role in the obesity epidemic and its related diseases, such as type 2 diabetes, heart disease, hypertension, strokes, and certain cancers, should it not follow that our centers of healthcare provide the healthiest food possible for healing?

Is it possible that the very institutions trusted with making us healthy might, in fact, be putting us in the hospital?

In 2012, a friend of mine got the call that his father was in the hospital and would need to undergo a triple bypass surgery within the next couple of days. It was a heart-wrenching and stressful experience for the entire family, who had little time to prepare mentally or emotionally for the prospect of losing a father and husband. Within a few days after surgery, he was doing well and sitting in his hospital bed eating a hamburger.

The foods that patients eat when they leave the hospital is their own concern. But don’t hospitals have a certain moral obligation to provide the safest and healthiest environment possible for healing? This isn’t just a concern for patients, but also their visitors and hospital staff. Transforming the hospital food environment into one in which only healthy options are available is not big brother telling people what they can eat.

Visitors can leave the hospital to eat elsewhere, as can hospital staff who have the additional option of bringing their own food to work. What setting healthy food standards in hospitals is about is making sure that the mission of our hospitals is in line with its practices; that the hospital is not in fact (indirectly) participating in the business of putting people in the hospital. In fact, hospitals do occasionally profit from the large food industries selling meals on their property.

The conflict of interest is obvious and the costs to society and healthcare real. In fact, the obesity epidemic costs the healthcare system approximately $147 billion a year, as of 2008. If obesity were to disappear, Medicare spending would fall by approximately 8.5 percent and Medicaid spending by 11.8 percent. A large percentage of the costs come not from treating obesity directly, but from treating the diseases associated with it, like diabetes (Finkelstein et al., 2009).

These diseases, and thus treatment for them, can largely be reversed or controlled through proper lifestyle changes involving a nutritious, balanced diet and vigorous physical activity. Making these changes is easier said than done, but it’s the responsibility and moral imperative of hospitals to set the example, starting with the food they serve.

The Partnership for a Healthier America, a non-profit formed in 2010, launched a campaign to push hospitals across the country to start serving healthier food. Over 155 hospitals have signed a memorandum of understanding, agreeing to raise the bar in meeting certain nutritional standards. They’ve also agreed to remove deep fryers and increase fruit and vegetable purchasing. Below are just a few examples of hospitals taking the lead to improve their food environments.

An academic hospital in Burlington, Vermont, Fletcher Allen Healthcare is in many ways a model for the next incarnation of hospital food. The facility works with over 70 local farmers and producers, sources 80 percent of its meat from local sources eschewing the use of antibiotics, and produces vegetables for its cafeteria in its own rooftop garden.

The University of California San Francisco has implemented a Sustainable Food Policyfor their medical campus food outlets that serve patients, students, faculty, and visitors. Part of this policy includes nutritional labeling of foods sold at the Moffit Café in the Moffit Hospital on the UCSF Parnassus campus, empowering customers to make informed choices.

In their policy for food services sustainability, UCLA set several goals, including having healthier choices in their medical center cafeteria. As of 2011-2012, UCLA has implemented a reduced price salad bar, increasing soda prices to offset the costs, eliminated all fried foods, and started meatless Monday.

The Michigan Health and Hospital Association launched a Healthy Food Hospitals Initiative in 2011. The four star initiative allows hospitals in the state to earn stars for making a commitment to purchasing 20 percent Michigan-grown and produced food products by 2020. As of 2011, 50 of the 144 member hospitals had signed-up. St. Joseph Mercy Ann Arbor is one hospital setting an example by nixing deep fryers–all fries are baked and unsalted-providing patient menus that include nutritional information, and employing a farmer to produce food in their campus garden for the cafeteria.

Clearly change is possible and it’s needed. This is not an insurmountable issue. We can see hospitals starting to take targeted approaches to feeding patients, staff, and visitors well. No one approach will work for every hospital, but there is at least one avenue through which change can be made at every institution. Hospitals simply have to be committed to discovering what that best approach is and undertake it. It will take time and it will take resources, but the costs of obesity and poor health outweigh the challenges of initiating change so that hospital food no longer puts us at risk for hospitalization.