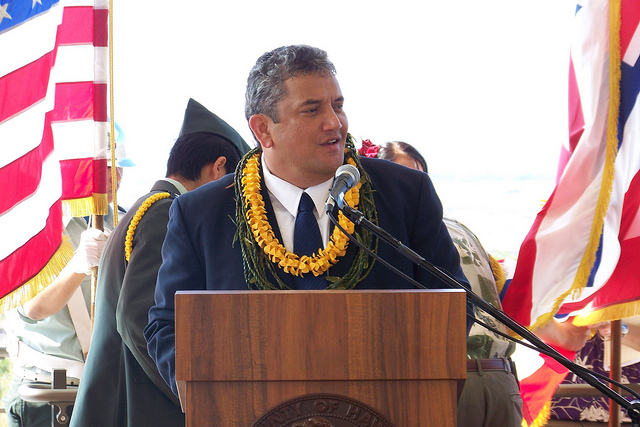 In a letter explaining his decision, Mayor Billy Kenoi acknowledged that the bill had been “divisive and hurtful” at times and said it was “time to end the angry rhetoric and reach out to our neighbors.”

Bill 113 effectively halts the expansion of GMO crops on Hawai‘i’s largest island (after which the state is named) by prohibiting open-air cultivation of new varieties of transgenic plants. This means biotech companies like Monsanto, Dow, Du-Pont-Pioneer, BASF, Syngenta — who have established themselves on other Hawaiian islands like Kauai, Maui, Molakai, and O‘ahu — won’t be able to grow GMO crops on the Big Island.

The new law, however, exempts papaya growers who cultivate transgenic varieties of the tree that are resistant to the ringspot virus, and Big Island Dairy, which grows GMO corn to feed its livestock. (Big Island, incidentally, was one of the first Hawai‘ian islands to pass any kind of GMO regulatory bill — back in 2008 it had banned GMO coffee and taro.)

In a letter sent yesterday to councilmembers explaining his decision, Kenoi said: “Our community has a deep connection and respect for our land, and we all understand we must protect our island and preserve our precious natural resources. We are determined to do what is right for the land because this place is unlike any other in the world. With this new ordinance we are conveying that instead of global agribusiness corporations, we want to encourage and support community-based farming and ranching.”

Kenoi also outlined a general plan to provide county assistance, investment, and support for community-based agriculture, including a “first-in-the-state Food Self-Sufficiency Baseline Study of Hawai‘i Island to measure the island’s progress toward food self-sufficiency.” (The state imports nearly 92 percent of its food, according to the Pacific Regional Integrated Sciences and Assessments Program.)

The bill had been approved by the Hawai‘i County Council by a 6 to 3 vote last month, but most activists were doubtful that Kenoi would sign it into law given the immense pressure he was facing from biotech companies and the pro-biotech Hawai‘ian state government. Though a large majority of the Big Island public was in favor of the bill, several Big Ag and ranchers groups had spoken out against it. Some had threatened to challenge the bill in court if it was passed.

In his letter, Kenoi acknowledged that the bill had been “divisive and hurtful” at times and said it was “time to end the angry rhetoric and reach out to our neighbors.”

“I think the letter is really beautiful,” said Mary Laques of Hawaii Seed, a coalition of grassroots groups, farmers, and activists that promotes ecological food and farming. “I have to say that it did come as a surprise. There was a lot of pressure on him from a lot of entities and there’s always a lot of pressure on him from Honolulu. But it seems like it’s such an incredible moment time that he decided to be proactive… I think he understands that Hawai‘i Island has the potential to be a model for sustainability.”

Coming just weeks after the island of Kauai passed a law related to GMO fields and pesticide use disclosure, Bill 113’s passage is a major victory for the growing anti-GMO movement in this island state. (Read my previous reports about the various twists and turns of Kauai’s hotly debated bill here and here.)

“It’s quite remarkable that these bills have passed despite the current power structures in place via the Farm Bureau and large landowners coming out strongly against them,” said Andrea Brower, a Kauai-based food justice activist. “I think this indicates that public engagement and opinion [about GMOs] is shifting in a hugely significant way and politicians are beginning to realize this.”

Indeed, the anti-GMO movement in Hawai‘i seems to be on a roll right now. Another GMO regulatory bill, similar to Kauai’s Bill 2491, is expected to be introduced in the Maui County Council today.