Attention Shoppers: Do You Really Know What’s In Your Cart? | Civil Eats

Attention Shoppers: Do You Really Know What’s In Your Cart? 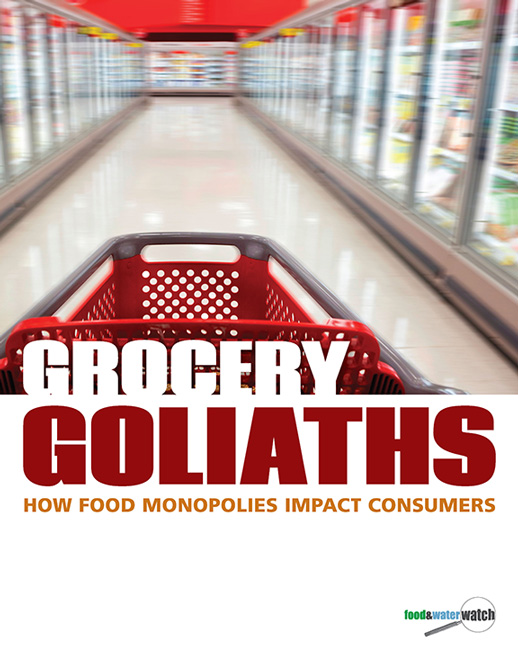 Imagine you’re in the supermarket. It’s an emporium, packed to the brim with shelves of colorful packaging. As you peruse the aisles, you’re confronted by brand on top of brand on top of a new brand that you’ve never heard of before. Cue sensory overload. There are hundreds of different bags of chips. There’s this condiment and that condiment, this yogurt and those “all natural” yogurts. A plethora of choice; or is choice just an illusion? Take the Food & Water Watch Foodopoly Quiz on the newly launched Foodopoly website and you’ll be shocked to find out who really controls what you put in your cart, and why it all matters.

In addition to what you’ll learn in the quiz, Food & Water Watch released a new report, Grocery Goliaths: How Food Monopolies Impact Consumers, which focuses on one aspect of the Foodoply – the grocery industry. Our researchers analyzed two years of grocery industry data (100 different types of groceries) and found that intense consolidation of the grocery industry leaves shoppers with stifled choice and increasingly expensive grocery bills. And, it’s not just consumers who are affected. Mega mergers in the grocery industry are pushing small food companies (and the viability of a sustainable food system) out of the game, all to make a profit.

Wenonah Hauter, executive director of Food & Water Watch and author of the book Foodopoly: The Future of Food and Farming in America has warned us for years that we can’t shop our way out of the many problems of the current food system. Food & Water Watch’s new report further substantiates this notion. Such lack of transparency and competition inside supermarket doors and among grocery retail chains confirms that the ability to make informed decisions when buying groceries is truly slipping from our fingertips.

In 2012, more than half the money Americans spent on groceries went to four retailers: Walmart, Kroger, Target and Safeway. Those top four grocery retailers controlled 63 percent of the sales of 100 types of groceries. And, mega retailers not only influence where we shop, but what we buy. You may think you’re choosing among competitors, but large firms often control multiple brands of the same type of grocery.

Two firms control 61.1 percent of cracker sales. Four firms control 79.9 percent of cereal sales. Think you’re a savvy shopper when you choose to buy “healthy” foods such as Kashi or Bear Naked? Kellogg’s owns both. A small handful of grocery goliaths are tricking shoppers, not cutting them deals.

Other data from the report shows that since the Great Recession started, grocery food prices have risen monthly. Meanwhile, the largest grocery retail companies pocketed major profits (an estimated $77 billion in 2012), while local retailers have been struggling to stay alive. What’s the farmers’ share of the pie? Take the quiz to find out.

Mergers and acquisitions in the grocery industry are diminishing choice, wiping away competition and affecting the food system from farm to fork. As Wenonah says, we can’t shop our way out of the Foodopoly, but what we can do is try to change the system. We can spread the word, educate our peers and pressure Federal Trade Commission (FTC) regulators to do their job: foster competition and protect prices by regulating mergers and acquisitions. Stay tuned for how you can take action with us to protect the future of our food system. In the meantime, share our quiz and check out our full Grocery Goliaths report for more information.

This post originally appeared on Food and Water Watch.

Katherine Cirullo is the communications assistant for Food & Water Watch. She provides support to the communications team in a number of ways, particularly by tracking and organizing media and writing and editing press materials. Katherine received a B.A. in sociology with a concentration in environmental studies from Colorado College. She also has experience in the field studying agro-ecology and political ecology of forests and oceans in Thailand. She can be reached at kcirullo@fwwatch.org. Read more >