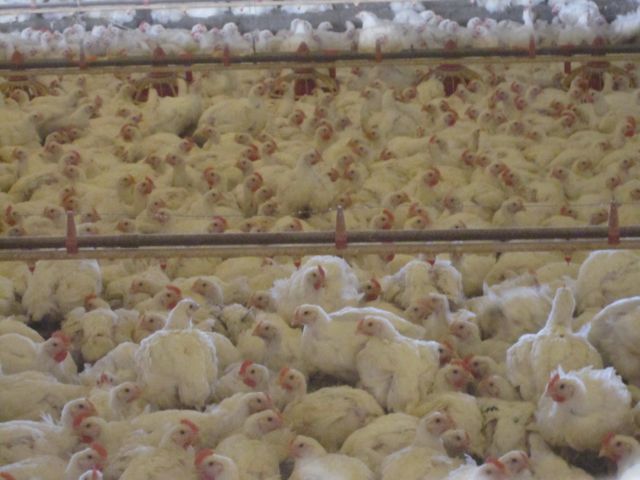 Last month, the Centers for Disease Control (CDC) reported that 317 people in 20 states had confirmed cases of Salmonella caused by chicken traced to a California processor. This should be (yet another) wake-up call that it’s time to make serious changes to the way U.S. chickens are housed, raised, and processed in the factory farming system. But there is an even deeper issue at the heart of this problem: The fact that chickens are deliberately bred for excessive growth.

This rapid growth produces the huge white breast meat Americans are used to seeing at the supermarket, but what isn’t on the label is the terrible price these chickens paid. Excessive growth is causing massive suffering for nearly nine billion birds each year as well as potentially dangerous disease vulnerability for us. It’s more than enough to make you sick–and it just might.

Many of these chickens spend much of their lives practically immobilized in their own waste with open sores that can act as gateways to infection. Studies show that the stress of the excessive growth rate and accompanying poor living conditions contribute to lowered immunity, making the chickens even more susceptible to disease.

“Ninety-five percent of chickens are grown in such horrific conditions that they’re standing in poop and they end up infected with salmonella,” Dr. Marc Siegel, associate professor of medicine at NYU Langone Medical Center, pointed out to HealthDay News. “If one chicken gets it, they all get it.”

Rather than looking at ways to raise healthier chickens, much of the chicken industry relies on preventative antibiotics–giving the animals daily, low doses of many of the same drugs we use to treat human diseases. This practice has been shown to contribute to antibiotic-resistant “superbugs” that can infect us and are unyielding in the face of treatment, as evidenced in the Salmonella case and other recent outbreaks.

No one’s on this case.

While U.S. Department of Agriculture (USDA) inspectors oversee federal slaughterhouses, and the FDA and USDA look at labels, no federal agency inspects farms for animal welfare, which is inextricably connected to food safety. The primary federal laws that govern how farm animals are treated in transit and slaughterhouses exclude birds.

In light of the shocking dearth of oversight, we need to address chicken welfare issues ourselves. Our polling shows that 94 percent of Americans agree that animals raised for food should not suffer as they do now and that seven in 10 consumers are willing to spend more money for chickens raised under better conditions, including slower growth.

At the ASPCA, we’re tackling this issue with our recently launched chicken welfare campaign, “The Truth About Chicken.”  In response to our Web site, the chicken industry’s trade group, the National Chicken Council, created a site that looks just like ours, except they changed words to suggest today’s chickens are doing just fine. We know that’s not the case.

The chicken industry is grappling with foodborne illness from their products, concerns about overuse of antibiotics, and high rates of health problems in chickens. It’s clear change is needed for the wellbeing of chickens and American consumers.

The ASCPA recently issued an open letter to the National Chicken Council urging them to address the issues of excessive growth and other welfare concerns in their forthcoming welfare guidelines, which essentially set the industry standard. While their initial response was not encouraging, we continue to hope they will take animal welfare seriously.

In the mean time, the ASPCA is doing everything we can to let consumers know how much is at stake. As an organization dedicated to preventing cruelty to all animals, we remain committed to improving the conditions that billions of chickens raised for food are currently enduring.  It’s not only the right thing to do for the chickens, but also the right thing to do for our health. Better for chickens is better for us.