Above the Fold: EPA, Protect Bees! 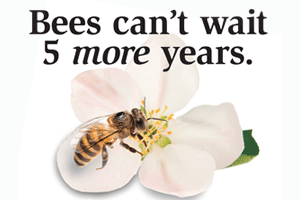 Inaction? Intransigence? Negligence? Whatever the right word, we’re reminded that the U.S. is behind the curve when it comes to protecting bees. Yesterday, Europe’s restrictions on bee-harming pesticides went into effect. Today, in a full-page advertisement in the New York Times and six other major papers, Pesticide Action Network (PAN) and over 60 other food, farm, faith, and investor groups called on the Environmental Protection Agency (EPA) to take action to protect bees.

Even though Thanksgiving has passed, there are still many things for which to be thankful. Among them, let’s count the bees. They pollinate much of our food, including the cranberries and pumpkin on so many Thanksgiving tables last week. In fact, we rely on bees for about a third of our food.

But these noble pollinators are in trouble. Beekeepers in the U.S. have been losing, on average, over 30 percent of their bees each year since 2006—twice what is considered sustainable. And commercial beekeepers, whose bees pollinate California almonds, lost over 50 percent of their colonies last year. Some even reported historic losses of 70 percent or more.

This is unsustainable, not only for beekeepers, but also for our food system and the agricultural economy.

EPA has stated that it’s at least five years away from doing anything to protect bees from pesticides known to be harmful. First, the agency needs to complete its review of neonicotinoids, a relatively new and widely used class of systemic pesticides—which isn’t due to conclude until 2018.

Scientists point to neonicotinoids as a catalyst driving bee declines. While acutely toxic to bees (it kills them), studies have shown neonics also compromise bee immune systems and make them more susceptible to a wide range of other impacts like poor nutrition, mites, and diseases.

Until EPA completes its (very slow) review of neonic products, the agency will not take action to adequately protect bees from this known threat.

Beekeepers say they—and the bees—can’t wait for the agency’s glacial pace. Federal officials have tried to appease beekeeper concerns with aimless conferences and reports, along with changes to pesticide product labels that yield no additional protections for bees. But decisive action, not token action, is urgently needed.

As beekeeper Jim Doan of New York said: “Beekeepers are losing colonies at an unprecedented rate—the losses are too extreme to keep up with, and our entire industry is at risk of collapse unless federal action is taken.  Convening conferences and changing pesticide labels is not nearly enough.” 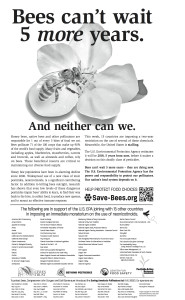 If you’re not a New York Times reader, you can also catch today’s advertisement in the Boston Globe, the Washington Post, Politico, Minneapolis Star Tribune, the Des Moines Register or the Los Angeles Times.

Since EPA has failed to step up in a timely way, states across the country are taking up the issue of protecting bees. In New York and New Jersey, legislative leaders have already introduced bills that would ban or track neonicotinoid pesticides.

And last week, we were offered another glimmer of hope as Oregon regulators announced they are planning to restrict the use of neonicotinoids used on trees—and linked to a recent massive bee kill in that state.

While state action is helpful, bees need more comprehensive and uniform protections across the country. EPA should see states in action as a signal that the agency needs to step up. And quickly.

Take action » See a copy of the advertisement and join the Center for Food Safety, the Ceres Trust, Beyond Pesticides and PAN in sending a message to new EPA chief Gina McCarthy: It’s time to step up for bees.