This Hamburger is Brought to You by the Cycle of Poverty 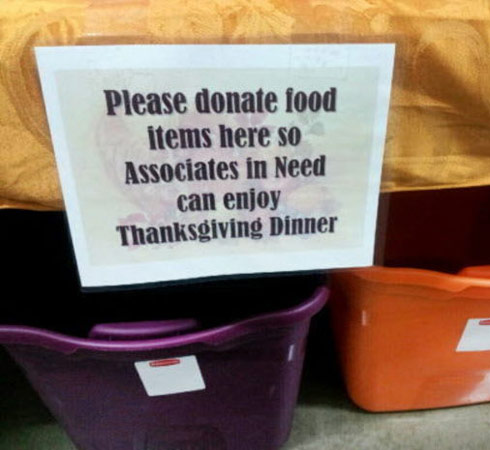 That’s the text of a sign hanging over a bin at a Walmart in Canton, Ohio. A photo of the food drive surfaced earlier this month, sparking new attention to the connection between hunger and working conditions in America.

This comes close on the heels of revelations that McDonald’s “McResource” help line is encouraging employees to meet basic needs by visiting food pantries, applying for food stamps and enrolling in Medicaid. Last week, activists made headlines by revealing that the McResource line advises workers to return or sell unopened holiday gifts to save money and “bring in some quick cash.”

Here’s a radical thought: If you’re working, you shouldn’t have to rely on donations or returned presents to feed your family a holiday dinner. You shouldn’t need government assistance to purchase groceries or get health insurance. Employers should pay working Americans enough to give to food pantries, not collect from them.

Despite the fact that the majority of households receiving food stamps include one or more working adults, pundits often decry those who receive government benefits as “takers.” Even well-meaning people sometimes think of charity beneficiaries as “misfortunate.”

But misfortune implies one has fallen on hard times. Working at America’s most profitable companies isn’t supposed to be a misfortune.

The truth is that these employers aren’t just creating poverty. They’re profiting from it through a complex cycle of low wages and low prices propped up by taxpayer subsidies, many then spent at the same businesses.

First, companies create poverty by keeping wages low. Median pay at McDonald’s for front-line workers is $8.69 an hour. Walmart, the country’s largest private employer, pays an average of $8.81 an hour (despite the fact that this family-owned company took home $17 billion in profit last year). Their sheer size forces others in the industry to cut costs to remain competitive, often by lowering wages.

Next, the companies make tremendous profits targeting products to low-wage workers. The Dollar Menu and Walmart’s “Always Low Prices” become immensely attractive on a poverty budget. The bitter irony is that the only way these companies can remain enormously profitable selling products that underpaid workers can afford is by underpaying their own workers. Instead, taxpayers and charities step in to fill the gap between wages and the cost of living.

This unsustainable system’s cost to the taxpayer is profound. Experts estimate that nearly 90 percent of fast-food employees work without benefits. While 25 percent of the American workforce is enrolled in one or more public assistance programs, the number is twice as high for the families of front-line fast-food workers.

This translates into an annual billion dollars in food stamp benefits and $1.9 billion in Earned Income Tax Credits for employees (EITC is chiefly targeted at families with children, upending the common misconception that fast food workers are teenagers working for pocket money). In effect, the safety net is a subsidy for companies that refuse to provide benefits or a living wage.

Yet the exploitation of poverty does not end there. That same safety net is big business for these companies. While exact data on food stamp use is unavailable to researchers and the public, a report by public interest lawyer Michele Simon found that Walmart is a major beneficiary of the program. Half of Oklahomans’ food stamp benefits are spent at Walmart. Just nine Walmart Supercenters in Massachusetts receive four times as much cash from food stamps as every farmers market in the country combined.

America’s food giants are exploiting their workers, taxpayers, and charities. And it’s not because they have no other choice. Compare Walmart’s $8.81 average hourly wage to companies like Costco, where the average worker makes $21.96 an hour. Costco’s commitment to good wages and benefits hasn’t hurt their bottom line; earlier this year, they reported a 19 percent increase in profits, while boasting higher revenues and profits per employee than Walmart.

Remember the classic plea of the down-and-out? “Will work for food.” At Walmart, McDonald’s and elsewhere, millions in our community are working for less than that. The status quo is unjust and unsustainable — but together, we can change it.

This holiday season, as we give thanks for food and family, let’s bring the conversation about fair wages and fair food to our own dinner tables. Let’s stand with the workers striking to demand better labor conditions on Black Friday, and with the workers across the food chain fighting for fair wages every day. The time to act is now.

Miranda Everitt is an MPP candidate at the Goldman School of Public Policy at UC Berkeley and research assistant at the Food Labor Research Center. She has served on the board of OBUGS, a school-garden program at West Oakland schools, and worked at Alameda County Community Food Bank. Miranda lives in Oakland, California, and on Twitter as @mirnanda. Read more >

Nora Gilbert is a graduate student in the School of Public Health and the Department of City and Regional Planning at UC Berkeley. She is the Program Coordinator for the Berkeley Food Institute, a new interdisciplinary research and policy center at UC Berkeley. Read more >

William L. Haar works for Prevention Institute, an Oakland, California-based nonprofit research, policy and action center. He is completing concurrent masters degrees in public health and social welfare at the University of California, Berkeley. His work focuses on the impact of public policy on community health and social justice. Read more >