A Feast for All on Thanksgiving: An American Family Cooks 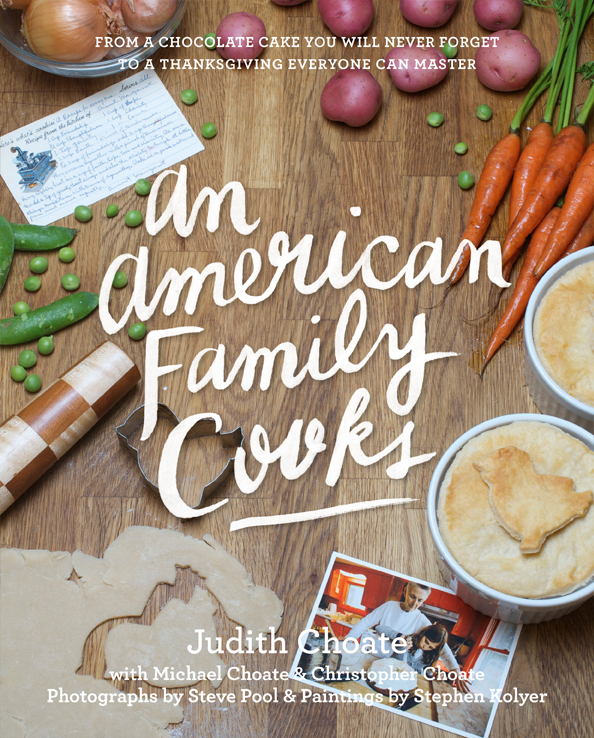 I’m writing this as my parents and my in-laws are about to descend upon our tiny household for Thanksgiving. This is the first year we are hosting and my husband’s parents decided to make the trek from upstate New York for the occasion and to bond with our 15-month-old daughter before she becomes a teenager.

There couldn’t be two more opposite couples and I can’t deny that there is a little nugget of anxiety lurking in my belly at the thought of how these next few days will pan out. The first issue being how to make it all work in a 700 square foot home. But that’s what family is all about, right? The joy and the pain, the laughter and the tears, the bitter and the sweet that is what we start from and who we become.

It seems especially fitting this year to have Judith Choate’s new book, An American Family Cooks, as a companion. Part cookbook, part memoir, part family journal, it chronicles the Choate family through the food they choose to cook. And after spending the last couple of months reviewing it, I feel like I know them…which makes this Thanksgiving meal seem fuller, as if another family is coming for dinner. 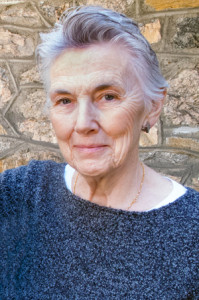 Choate has been cooking and writing about food for over 50 years. She has authored and ghostwritten over 100 books, working with some of the most prominent chef’s of our time. So needless to say, her two sons and their extended families have picked up a few things.

An American Family Cooks documents the culmination of the multi generational influence food has had on the Choates, from references to the past with Judie’s own favorite childhood recipes, to today’s youngest family members weighing in.  No one is left out.

Choate’s husband, Steve Pool, had the job of photographing the whole project, sprinkling the pages with the images that create more of a family album than a classic cookbook. Friend Stephen Kolyer lent whimsical and bright illustrations, enlivening the family friendly theme that much more. I could leaf through this book with my one year old and she would stay engaged due to these vibrant drawings…a true test of family friendliness.

Because all of the people in this clan had a hand in creating the book, it feels like an intimate look into their lives. From the very start, the writing is warm, conversational, and funny. The forward is written by the two sons, Mickey and Chris, both accomplished cooks and food professionals, with interjections by Judie that immediately make it clear that this is a real family.

The introduction also gives a good sense of background, indicating that their individual careers were really shaped by a life lived through food, with the everyday experience of cooking and family as a backbone. While there is true praise and acknowledgment of the achievements they all have made, there is also a humbling and warm sarcasm thrown in, a gentle poking fun at each other. (Like when Judie speaks about Chris, saying “Fine wine and food are now his life. This is from a guy who dunked his peanut-butter-and-jelly sandwich in orange juice.”) That is the humor that can keep a family close.

The charm of this book lies in the personal and lengthy narrative, Judie’s explanations before each recipe that let you know why it was chosen, who makes it the most, tricks and tips to make it your own. I actually found myself reading every single recipe just to hear more of their story, even things I have no interest in making Venison with Pepper Sauce.

In fact, some of the recipes are actually all narrative, with no ingredient list or concrete proportions. If you are examining this book as a cookbook alone, and have the need for a lot of precision, then this might not be for you. My analytical mind found vagueness in several recipes: Marinated Yogurt Cheese doesn’t specify fat content of yogurt to use. The Heirloom Tomato-Basil Salad calls for “4 thick slices of rustic bread, well toasted” but does not tell you what to do with it before you “toss” it in. The Ginger Cookie recipe (a definite keeper, by the way) calls for a preheated oven but never tells you what temperature.

This is a cook’s cookbook, more of a collection of guidelines meant to instruct those of us who tap into our intuition in the kitchen. Mickey’s wife, Laurel, aptly states, “One thing I found interesting reading through this book as Grammy, Mickey, and Chris were working on it is that I never realized how much a person puts into a recipe and makes it their own. Once I started sharing recipes with people it became obvious that I don’t just read the recipe and do everything it says. There are always little adjustments that I make to improve it for my taste.” Which is exactly the type of person this book is geared for.

And once you understand that, the recipes open up a huge repertoire to play with. Judie says that “The kitchen has become the true melting pot of our nation” a theory reflected in recipes for everything from Gnocchi to Mole to Coq au Vin to Paella. The diversity made it fun to read through, never getting bored from too much attention to one single genre.

Luckily, my least favorite section, entitled “Fancy Dining,” was very short. Being someone who chooses not to eat it, I had little interest in reading about the ins and outs of veal chop selection or making a proper Jus. But that’s another thing that’s dynamic about An American Family Cooks, being written by three different people offers three different styles to find alignment with. While I was less inclined to enjoy Mickey’s traditional French inclinations, I thoroughly appreciated Chris’s wine advice and Judie’s attention to sourcing quality ingredients (her nod toward limiting food waste in her “Impromptu Soups” section was also much appreciated).

Today, my family’s Thanksgiving will feature Apple Pizza, featured here for you to try out as well. And while I’m substituting my own beloved crust recipe for “Nana’s Flaky Pie Pastry,” I love that I also had a “Nana” (more famous for her butter cookies) and that a touch of the Choate’s sense of tradition, both new and old, is finding a place with us.

And if I find myself in potentially awkward moments or battling the inevitable emotional upheavals that the next couple of days might present, I’m also going to remember to serve up some of Judie’s levity from this book:

It seemed to me that it was time to combine our love of cooking and eating with my ability to write it all down. Our irreverence and sense of adventure when it comes to food add to the process a great deal of pleasure and fun, which are always to be found at our table and, we hope, at yours.

3. Place the dough in the center of the work surface and lightly flour the top of the pastry, again using Wondra flour. Using a rolling pin, roll the dough out to a circle about 1 inch larger in diameter than your pizza pan. Carefully fold the dough over the rolling pin and transfer it to the pan. Gently fold in the edges and crimp.

4. Mix the 2 tablespoons Wondra flour with the cinnamon.

5. Place the apples in a large mixing bowl and sprinkle with the flour/cinnamon mixture. Add the lemon juice and cider and gently toss to coat. Drizzle in the butter and again toss to coat.

6. Carefully arrange the seasoned apple slices in slightly overlapping concentric circles over the entire top of the pastry.

7. Place in the preheated oven and bake for about 40 minutes or until the crust is golden and the apples are tender, caramelized, and beginning to crisp on the edges. Remove from the oven and let rest for about 15 minutes before cutting into wedges. Serve as is or with vanilla, caramel, cinnamon, or dulce de leche ice cream, whipped cream, or vanilla Greek-style yogurt.

1. Combine the flour, salt, and sugar in the bowl of a food processor fitted with the metal blade. Process to aerate and blend.

2. Add the shortening and butter, and using quick on-and-off turns, process just until crumbly. With the motor running, add the water and process just until the dough begins to form a ball. Scrape the dough from the processor bowl and divide it into two equal pieces. Wrap each piece in plastic film and refrigerate for about 30 minutes to chill before rolling. The dough may also be frozen; thaw before using.