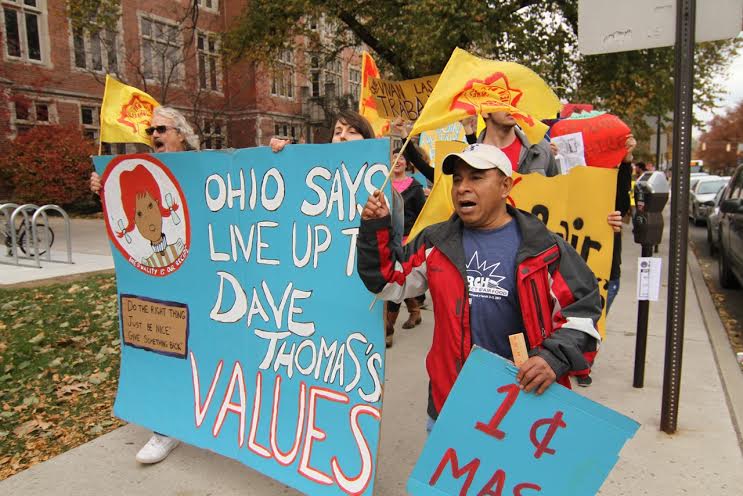 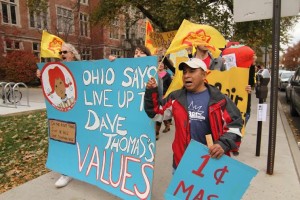 This week, from November 24-30, is the second annual International Food Workers Week (IFWW), organized by the Food Chain Workers Alliance. Organized around Thanksgiving, our goal is to lift up the workers in our food system–from farmworkers to those who work in meat, poultry, and food processing and in the distribution, retail, and service industries. With 20 million food workers in the U.S., and millions more around the world, our economy and our daily sustenance depends on these people. 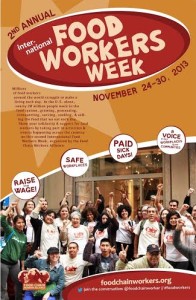 The national median wage of food system workers is $9.90 per hour. Almost a third of these workers are paid the federal minimum wage of $7.25 per hour or the tipped minimum wage of $2.13. In our survey of over 600 U.S. food workers, almost one-quarter are paid below minimum wage. As a result of these low wages, food workers use SNAP benefits (AKA food stamps) at 1.5 times the rate of the general workforce.

Workers around the country are organizing to demand a raise in the minimum wage, a voice on the job, and protections in the workplace, all of which benefit not only the workers, but also their communities and our food system. Two of the campaigns we’re supporting during IFWW are the Low Pay Is Not OK campaign with fast food workers and the Campaign for Fair Food with farmworkers. 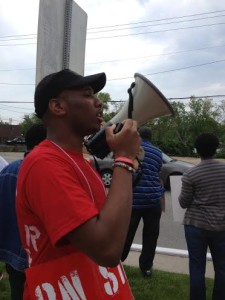 Charles Eden, a 20-year-old in St. Louis, has been working at Wendy’s for three years. Charles started off earning $7.35 per hour, and after two years, his pay went up just $.25. He also doesn’t have a set schedule. “In fast food, there’s no part-time or full-time. I work 40 hours one week, 20 hours another week,” he explains. In addition to working at Wendy’s in the mornings, Charles now works at Applebee’s in the evenings to make ends meet.

Since the beginning, Charles has been involved with St. Louis Can’t Survive on $7.35, the local counterpart to the national Low Pay Is Not OK campaign. He says that he feels empowered by the campaign: “I feel like I’m already in a union because they just know that we have the numbers. [The company] can’t just do and say what they want anymore.”

At the other end of the food supply chain is Emilio Faustino Galindo, a 58-year-old migrant farmworker, husband, and father of five children aged 25-35 years old. Until recently, Emilio and the other thousands of farmworkers in Florida tomato fields were paid $.50 per 32-pound bucket of tomatoes that they picked and they were not always guaranteed minimum wage in a typical 10-12-hour workday. With 16 years of experience, Emilio has also seen how other workers have suffered verbal and physical abuse, sexual harassment and assault, and, in the most extreme cases, modern-day slavery at the hands of labor contractors and growers.

Emilio is a leader of the Coalition of Immokalee Workers, which has won Fair Food Agreements with 11 major corporations, including Taco Bell, Subway, and Whole Foods, establishing more humane labor standards and fairer wages for farmworkers in their tomato suppliers’ operations. The Fair Food Program also requires that these companies pay a penny-per-pound premium for all tomatoes purchased from Florida, which farmworkers receive as a bonus in their paychecks.

Even with their success, Emilio says, “We continue to fight. The last major national fast food corporation that hasn’t signed on is Wendy’s.”

Charles and Emilio are just two of the thousands of workers in the U.S. standing up to corporations like Wendy’s, Walmart, Darden (owner of Olive Garden, Red Lobster, and other chains), McDonald’s and many others. During this International Food Workers Week, sign our petition to raise the minimum wage and go to our Web site to find other in-person and online actions.

Joann Lo is the Executive Director of the Food Chain Workers Alliance, a national coalition of unions, worker centers, and advocacy organizations representing workers throughout the food system. Joann has over 16 years of experience in labor and community organizing and alliance-building. She is vice chair of the Leadership Board of the Los Angeles Food Policy Council and mom to two energetic young kids. Read more >