This Thanksgiving, Shop Smart: Buy a Turkey Raised Without Antibiotics 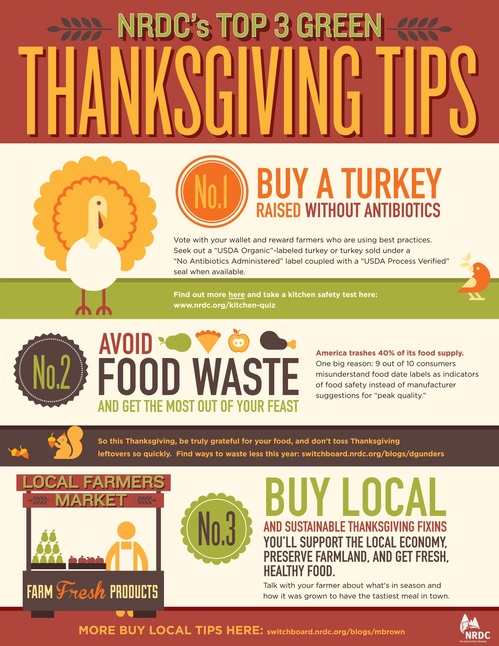 One of my favorite things about Thanksgiving is all the sides.  I’m already looking forward to sweet potatoes, green beans, cranberry sauce, and more.  But one thing Americans aren’t looking forward to this Thanksgiving is getting their turkey with a side of antibiotic resistant bacteria.  Unfortunately, practices in the conventional poultry industry are putting consumers at risk.

You may have heard of the recent outbreak of antibiotic-resistant Salmonella Heidelberg that the Centers for Disease Control (CDC) linked to Foster Farms chicken.  As of a November 15th CDC report, 389 people from 21 states and Puerto Rico have become ill since March 2013.

The bacteria in this outbreak are particularly dangerous:  The CDC reported that nine out of the ten patients tested were infected with bacteria that were resistant to at least one commonly prescribed antibiotic and three were resistant to multiple antibiotics.[1]  That means that when people were sickened by this particular Salmonella outbreak, they’ve faced an increased risk of hospitalization or possible treatment failure.  Of reported infections, nearly 40% of victims have required hospitalization, more than twice as many as would be expected in typical cases of Salmonella infections, according to a CDC spokesperson.

The antibiotic resistance seen in the latest Foster Farms outbreak is alarming but not surprising.

Multidrug resistance in Salmonella in chicken has increased significantly over the last decade.  Food and Drug Administration (FDA) sampling of meat and poultry across the United States, shows high rates of antibiotic-resistant pathogens on meat.

This year, the independent product testing organization Consumer Reports released theresults of its first-ever testing of ground turkey samples from around the country.  As I discussed here, what Consumer Reports found on conventionally produced turkey meat, where antibiotics are permitted to be used routinely, was certainly unappetizing: frequent contamination with antibiotic-resistant bacteria.  Detecting these “superbugs” on turkey is a sign that turkey producers may be relying on intensive antibiotic use to raise turkeys—a practice that is likely to spread antibiotic resistant bacteria.

Consumer Reports found that ground turkey labeled “no antibiotics,” “organic,” or “raised without antibiotics” was much less likely to harbor resistant bacteria than conventional turkey.  Antibiotics aren’t allowed in raising turkeys carrying these labels.  Sick birds may be treated, but they’re then sold to non-­organic markets.

Unfortunately, 80 percent of antibiotics sold in the US today are used on farm animals, not humans.  The vast majority of these drugs are used on industrial farms to speed up animal growth and compensate for crowded, stressful and unsanitary conditions.  This is despite warnings by leading medical and public health organizations that the routine misuse and overuse of antibiotics important to human medicine in the livestock industry spreads antibiotic resistance.  Most recently, the CDC stated: “Up to half of antibiotic use in humans and much of antibiotic use in animals is unnecessary and inappropriate and makes everyone less safe.”[2]

When antibiotics are used day after day to raise animals, resistant bacteria flourish and spread, making antibiotics less effective for people.  These dangerous pathogens travel off of farms and into our communities—not just on the meat itself, but also in our soil, air, and water.  Drug-resistant “superbugs” can even pass their resistant genes to other bacteria.

The effectiveness of the drugs we need when we get sick shouldn’t be squandered to compensate for better management practices in the conventional poultry industry.

This Thanksgiving, you can do your part to support farmers who are keeping antibiotics working for people by shopping smart.  By choosing USDA Organic or turkey sold under a “No Antibiotics Administered” label, consumers can reward turkey farmers who are using best practices.  Under the organic standard, meat producers are not allowed to use antibiotics, with some exceptions.  The “No antibiotics administered” or similar labels, such as “No antibiotics ever” are regulated by USDA but are not verified.  These claims are more reliable if they are coupled with a “USDA Process Verified” seal. Also consider other labels, such as “animal welfare approved” and “certified humane,” which mean that antibiotics were only used to treat sick animals.

But shoppers beware: “All Natural” has nothing to do with how an animal is raised.

Also be sure to handle your turkey and other meat safely.  The best place to store meat is at the bottom of your fridge, safely wrapped up, so there’s no risk of it dripping onto other foods.  It’s also good practices to keep two or more cutting boards in your kitchen.  To avoid food contamination, it’s best to have at least two color-coded cutting boards, and only use one of them for cutting raw meat.  Plastic or acrylic cutting boards are safer than wooden ones, because they are easier to clean, and less likely to harbor bacteria.  Finally, don’t just rely on a sponge and soapy water to get your cutting boards and knives clean—use either the dishwasher or sanitizing solution.

Have a happy, safe, and delicious Thanksgiving!