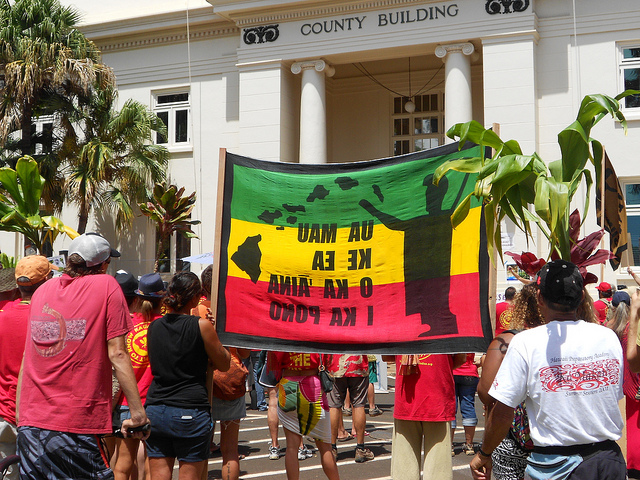 After a tense, two-day delay, the Kauai County Council finally voted 5-2 on Saturday to override Mayor Bernard Carvalho’s veto of a bill that seeks to regulate the biotech industry on the Hawai‘ian island. A tumultuous month after the council initially approved it, Bill 2491 is finally law.

The new law, which will go into effect in August 2014, requires agricultural companies and large farms to disclose the type and volume of restricted-use pesticides they are spraying, and the location of the fields being sprayed. It also requires them to disclose genetically modified crop field locations and set up buffer zones between those fields and public spaces like schools, hospitals, and parks. Companies have to notify the public before spraying pesticides. Failure to comply will be punishable by fines and jail sentences. The bill also requires the county to investigate the impact of these pesticides on local residents and the environment.

The proposed legislation primarily affects the four big biotech companies that have operations in Kauai — Dow, Syngenta, BASF, and DuPont-Pioneer — which are among the largest employers on the island.

That the bill managed to make it through, despite the roller coaster of challenges it has faced over the past few months, is a miracle of sorts for its supporters. In fact, if not for some creative last-minute maneuvering by pro-bill councilmembers, the bill would have died on Thursday — the initial day the council was to vote to override the mayor’s veto. (Read my earlier report leading up to the Thursday vote.)

In what supporters call a last-ditch effort to derail the bill, a day before the initial veto vote on Thursday, Hawai‘i state officials announced a new program via which companies could voluntarily build buffer zones and disclose information about pesticide use. The program doesn’t give the county any enforcement powers, nor does it outline any penalty for non-compliance.

On Thursday, about 100 people testified before the council mostly in support of the bill. Speakers included several residents from the west side of the island — where most of the biotech companies have their fields — who spoke movingly about a their health issues, such as cancer, birth-defects, and respiratory ailments, that they fear are related to pesticide use.

After nearly five hours of passionate testimonies, however, it became clear by Thursday evening that two members of the council would not support a veto override. Which meant that the final outcome of the vote would be 4-2 instead of the 5-1 that was required to cancel out the mayor’s veto.

That’s when, in an unexpected move, the four pro-bill councilmembers voted to go into recess and postpone the override vote to Saturday. The idea was to buy time to select a new member for the one vacant seat on the council, who could then cast the deciding vote. (The position had been lying vacant since last month when former Councilwoman Nadine Nakamura, who had voted in favor of the bill, stepped down to take a job as the mayor’s managing director.)

“We pulled it out of the hat basically,” councilman Gary Hooser, who co-authored Bill 2491, told me later. “We thought we were going to lose. Most of the people in the room thought we were going to lose.” The move turned the tide in favor of the bill. Selecting a new member only required a 4-2 vote, which meant the pro-bill caucus could choose a candidate who would favor their viewpoint.

At a special meeting on Friday, the council voted 4-2 for a new member — Mason Chock, who runs an outdoor education nonprofit called Kauai Team Challenge.

On Saturday morning, despite a last, in-person plea from Mayor Carvalho that the council heed his veto, Chock cast the deciding vote in favor of the override.

“I’ve been bothered by the divisiveness, displayed in many ways, that has fractured our community… my hope is that my action today will be a catalyst for healing,” Chock told the council before casting his vote, referring to the rift between supporters and opponents of the bill that has often led to emotionally charged confrontations between the two camps. Those opposed to the bill include not just big biotech companies, but also agricultural workers and other local employees who are worried for their jobs.

Once the last vote was heard and the result announced —5 to 2 for the override — the people packed into the cramped county hearing room, mostly bill supporters, clapped, cried, and hugged one another. Outside, on the lawn in front of the county building, more supporters cheered and sang and chanted: “We passed the bill!”

“It’s an incredible feeling for our community,” Hooser said on Saturday.  “This re-instills people’s faith that we can win against big corporations. I know other people are watching us and that this message is being sent all over [the world].” He said the victory would be an inspiration for the people of Big Island where another GMO regulation bill, seeking to ban open-air cultivation of genetically engineered crops, will be facing a vote on Tuesday. “It’s a good day on Kauai, it’s a good for grassroots democracy,” Hooser said.

Biotech companies will most likely challenge the bill in court. Company representatives have said in the past that they were opposed to the legislation as it would force them to reveal trade secrets. The Hawaii Crop Improvement Association, which represents the seed and agri-biotech industry in the state hasn’t yet responded to repeated calls for comment.

In a statement emailed to the media, Mayor Carvalho said he would “honor the Council’s decision” and work with to implement the new law.

“While a legal challenge is expected, and that may prevent us from immediately implementing 2491, I can assure the public that nothing will stop us from moving forward as quickly as possible with the public health study, working with the State to ensure the voluntary program gets off the ground in a timely manner, and lobbying the legislature for additional resources for enforcement on Kaua‘i,” he said.

Photo: Bill supporters outside the Kauai County Building. Saving the bill requried some creative last-minute maneuvering by councilmembers, by Pesticides on Kauai