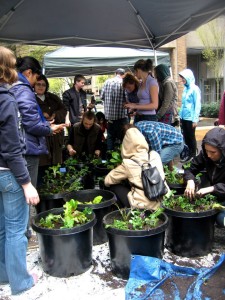 In 2011, I collaborated with a small, ardent group of Portland State University (PSU) students to found Food Action Collective (FAC), a student-led organization centered on promoting justice within the PSU and community food system. Now, today on Food Day, I find myself ruminating over how the organization came to be and how it has evolved.

The fall prior to FAC’s humble beginnings, I was taking graduate classes in sustainable systems and teaching an undergraduate course at PSU through Chiron Studies, a progressive student-teaching program. I had put in countless volunteer hours at community food nonprofits and was fresh off a post-graduation Italian Worldwide Opportunities on Organic Farms (WWOOF) trip spent toiling on a biodynamic farm, orchard, and vineyard. I was chomping at the bit to apply my worldly food experiences in the classroom.

Over four months, I designed an intro-level, broadly focused food systems class during which I was keen to cover the whole shebang: Food miles and farm worker justice, hunger and access, nutrition and subsidies, community food systems and family farmers, U.S. food and agriculture policy, and of course, the utter anonymity of it all.

As a novice instructor eager to sculpt change agents, I wasn’t prepared for what followed. By midterm, the reception for the subject turned from curiosity and enthusiasm to helplessness and frustration. Students wanted to know: “How can we possibly hope to create change within such a muddled, corrupt system?” I drew my response from the one I’d heard dozens of times from professors lecturing on similar abstruse world conundrums: “Well, it’s complicated.” But something didn’t feel right about offering this response so flippantly and it certainly didn’t sit well with my students.

At home, I flipped through the articles I’d assigned and realized that aside from being food related, they all shared one glaring commonality, they were woefully pessimistic. And then, the obstacle became more obvious. Weekly, sometimes daily, we find ourselves confronted with hundreds of impossibly abstract world problems (more so nowadays with petitions, campaigns, and news bites arriving in our inbox and via social media channels) from which we’re terribly far removed.

Without something tangible to grasp hold of, young folks might be finding themselves flummoxed at best, and at worst, entirely indifferent. What’s the acutely interested student, though less than seasoned leader, supposed to do?

This time in the classroom, the answer, “It’s complicated,” simply wasn’t going to cut it. Instead, students challenged the articles. And they brainstormed. We dropped the big picture talk and brought the conversation back home. Finally, we stopped talking in favor of the thing we wanted most–to start doing. There we were sitting in a classroom at Portland State University, in the urban core of one of the most progressive cities in the country, yet no organized student movement for food justice was happening on campus.

What I witnessed in the months following the founding of Food Action Collective–the culminating project for the class–was something beautifully transformative. I saw students cultivating empowerment in ways that spread contagiously across campus. On a snappy, drizzly day in the spring of 2012, a sundry lot of students clustered beneath two borrowed tents between classes to plunge their hands into rich, damp soil as they planted kale, strawberries, peas, nasturtiums, and a slew of other edibles during a container gardening workshop, Food Action Collective’s first event.

It was an odd spectacle: A truck bed overflowing with soil, blue tarps fluttering beneath students hunched over dirt-filled containers–all of this happening directly outside of Smith Memorial Student Union, the nucleus of campus. The crowd swelled with curious onlookers and FAC’s member-interest form was flipped over to create more space for sign-ups.

In the weeks that followed, students posted updates about their containers’ progress to Facebook and Instagram and exchanged tips for soil care and harvesting. Students began bringing bags of homegrown greens to munch on and share during meetings. Now, students can grow year round in FAC’s demonstration community garden plot.

This summer, FAC members gathered to plan PSU’s first annual Food Week, beginning October 21 and ending on October 25, the day after National Food Day. The majority of annual funds are channeled back into the community through locally owned businesses like Mixteca, a Oaxacan catering company that makes delicate, authentic tamales featuring regional flavors, and Nawitka, a social catering enterprise that provides employment and training opportunities for Portland’s Native American and Alaskan Native community.

Other Food Week events include a service-learning day at Oregon Food Bank, a preview screening with the creators of the in-the-works documentary, Gaining Ground, and a food policy panel discussion that will pull students into the dialogue around PSU’s food sourcing practices and strategies.

Though co-chairing a student organization while balancing school and work can be less than graceful, it’s immensely fulfilling. Now, each time I find myself lost in the systemic challenges wormhole, I rebound a bit more quickly. Although I may not be drafting new global policy that will save family farmers the world over, at least I’m doing something, right here, right now, in the place I love and call home.

Carolyn is an MPA student at PSU, studying sustainability and natural resource policy. She cofounded Food Action Collective in 2011 and has worked with the Northwest Earth Institute, Oregon Environmental Council, and Ecotrust on food and education projects. She WWOOFED across Italy in 2010, has designed and instructed food policy courses at PSU, and is an occasional contributor to Edible Portland magazine. Contact her at white.caz@gmail.com. Read more >