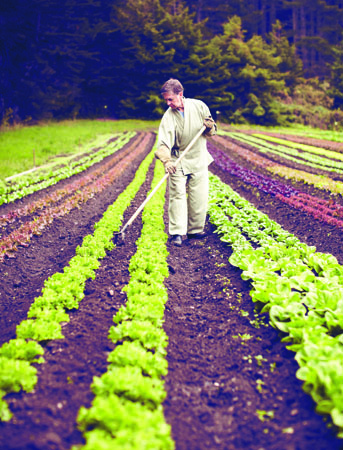 Trails of wispy fog cling to the switchback slopes along Highway 1 from Mill Valley to Muir Beach, past a hand-carved wooden sign leading to the Green Gulch Farm Zen Center.

From the road above, the tall eucalyptus trees form an arch over the gentle curve of the fertile valley below, which empties out into the Pacific Ocean. Drive a bit farther in and you’ll catch glimpses of iridescent crops laid out in neat ribbons, forming the heart of Green Gulch Farm: six acres of certified organic vegetable fields, fruit trees and flower gardens.

Green Gulch, also known as Green Dragon Zen Temple (Soryu-ji), is a residential Buddhist practice center in the Japanese Soto Zen tradition, rural retreat center and organic farm. You don’t have to be a Zen practitioner to experience deep gratitude at this temple farm. Everyone is welcome to walk the gardens and farm and, on Sundays, join the dharma talks, or stop by afterwards for hot tea and homemade muffins. You can also pick up a few loaves of freshly baked bread and just-picked produce, and stay for lunch.

“Anyone can practice Zen,” Abiding Abbess Linda Ruth Cutts tells me as I follow her around the Japanese silverbell tree in the middle of the Herbal Circle garden, enclosed by high hedges and four gateway arbors, billowing with roses. “There are so many possibilities to connect, starting with yourself.” The pathway, often used in silent walking meditation, is planted with chamomile, its fragrant buds wafting up calmness with every step.

Cutts further explains that the intention at Green Gulch is to awaken in those who live there, and those who visit, the “bodhisattva spirit”—the spirit of kindness and realistic helpfulness and, in doing so, they offer their understanding of the Buddha’s way.

Purchased by the Zen Center in 1972 from George Wheelwright, the rancher and co-founder of Polaroid, Green Gulch is a privately owned parcel within the Golden Gate Recreational Area. Wheelwright placed several conditions on the sale, including that the Zen Center keep the land open to the public and maintain its agricultural awareness. He could not have found a better steward of that mission than the Zen Center. Cutts herself first came to Green Gulch 20 years ago, after coming to Zen practice in 1968. She is one of the first five cofounders who homesteaded the land, before there was a zendo (meditation hall), garden or farm. Two decades later Cutts is a spiritual leader with main responsibility for the spiritual health of the temple and community, working closely with the other abbot, abbess, and dharma teachers at Green Gulch.

One of the original architects of the gardens at Green Gulch was the renowned late horticulturist Alan Chadwick, who introduced both Rudolf Steiner’s Biodynamic farming techniques and the French intensive method on the farm.

In the ensuing decades, Green Gulch Farm has served as a model of sustainable organic farming and gardening, offering individuals the opportunity to cultivate both a mindfulness practice and organic farming skills through its sixmonth Farm and Garden Apprenticeship.

Zen schools are noted for their practice of work. The farm apprentices wake early each day to sit in silent meditation before they work in the fields. Cutts explains how the work itself is the practice, sharing a famous Zen Master’s quote: “A day of no work is a day of no eating.”

I ask Cutts if she thinks the crops are different here, perhaps imbued with the residents’ mindfulness practice. She tells me that everything flows from the zazen (sitting meditation). “The farming at Green Gulch is about taking care of this land completely, whole-heartedly, with attention to detail and a willingness to take care of each living thing, including the people who live here,” Cutts says. “We practice with the full experience of interconnectedness. That is the full expression of the practice.”

In her soulful book Gardening at the Dragon’s Gate, an almanac of Zen and the art of gardening, Muir Beach “fierce gardener” Wendy Johnson writes: “In Buddhist texts, consciousness is said to be a field, a piece of earth on which every kind of seed is planted. . . . The quality of our life depends entirely on which seeds we garden and nourish in our consciousness.”

Johnson—who lived, gardened and practiced at Green Gulch for 25 years and is an ordained lay dharma teacher—says that when she looks deeply, she sees that they’re growing lettuce at the bottom of [what once was] the ocean. Compost, Johnson says, made everything at Green Gulch possible. “You need to have an appetite for rot in order to give back to the great earth,” she says, quoting the Buddha: “All conditioned things are of a nature to decay.”

“We have a commitment, season after season, to compost, grow cover crops, to pay back a great debt of gratitude to the earth,” she says. “It’s wonderful to practice with friends who take equal delight in dumping old oatmeal on a compost pile and think, ‘We’re going to have great kale!’ “

Current farm manager Qayyum Johnson joined Green Gulch as a farm apprentice in 2006. Johnson descends from a wellworn tractor to meet me at the public path that passes through the farm and we walk together past rows of neon lettuces, deep green kales and chard, blossoming broccoli and tiny white hearts of fennel, just breaking ground. Day hikers and bikers stream past, noting his mud-covered boots and nodding to him with respect.

We stand in silent appreciation of the kaleidoscope crops in chocolate cake-colored soil. He says that the grounding cultivated in sitting meditation sets the practice for fieldwork, which he sees in the care with which the apprentices work together, mostly in silence. When needed, they practice “functional speech,” communication that’s necessary to clarify the task at hand.

Sara Tashker, who started as a farm apprentice in 2002, worked in the farm and garden and later became the farm manager, today serves as the director of Green Gulch.

“The farm is unique in that it is not focused on production farming, it’s focused on growing soil, food and people,” Tashker says, noting that the farm doesn’t operate at full scale. “We’re cultivating ecological awareness of interdependence, which is a beautiful way to express our practice.” Each year there are 30–40 applicants for just seven or eight apprentice spots. For many, it’s their first formal farming or meditation experience. Many stay on after their apprenticeships end, either for an extended meditation practice period or to join the Green Gulch staff.

Hopeful apprentices are asked to first stay for an initial two-week trial period. “You can teach most people to farm,” Tashker says. “But we look for people who have the energy and spirit to cultivate a wide awareness. Can they pay attention, track the cause and effect and see the connections? Those are qualities that make this a good experience for both the apprentice and the farm.”

Brie Mazurek, online education manager at the Center for Urban Education about Sustainable Agriculture (CUESA) at the San Francisco Ferry Plaza Farmers’ Market, is someone who had those qualities. After 10 years in book publishing, and with an increasing interest in food and farming, she left her job in 2009 to become a Green Gulch farm apprentice.

“For me, the apprenticeship combined my growing interest in Buddhism and farming,” she says. “It was an amazing experience. Being in this incredible, beautiful place, and working and living in community with people, felt very vital. It was challenging—and not just the practice, but also learning how to farm.”

After her apprenticeship, Mazurek worked in the San Francisco Zen Center kitchen, became involved in urban farming and volunteered at CUESA, where she was later hired.

“I know I would not be where I am right now if it were not for my experience at Green Gulch,” she says. “While I’m not farming myself, I think my way of being of service right now is helping farmers share their stories and helping urban folks like myself feel more connected to their food.”

Mazurek also cites the long and special relationship between CUESA and Green Gulch. The farm has a beloved stand at the Saturday Ferry Plaza farmers’ market every May through October. Its many devotees include Annie Somerville, executive chef at Greens Restaurant in San Francisco, which opened in 1979 under the auspices of Zen Center.

“Green Gulch is at the heart of Greens and we are very lucky to be connected,” Somerville says.

Somerville first cooked at Tassajara Zen Mountain Center, inland from Big Sur, and later trained under Deborah Madison at Greens, which was largely built by and provided an opportunity for Zen students to work together, extending their Buddhist practice into the workplace.

“The produce at Green Gulch is tended to with incredible attention and care,” Somerville says. “The farmers are immersed in Zen farming; it can’t help but be a good thing.”

Greens also gets first pick of farm lettuces. “I love the leaves of the little gems; they give things a nice structure and crunch. And the big Bloomsdale spinach leaves are so wonderful sautéed, in soup and as a wrap,” Somerville says, extolling the farm’s microclimates and compost. “The beet thinnings and fresh herbs are all so flavorful; everything is a reflection of the healthy soil.”

The farm is also known for its breads, made by baker Mick Sopko, who operated the Zen Center–run Tassajara Bread Bakery in San Francisco for 12 years. An invocation in Italian is offered before the bread is baked:

Spirits of earth, water, air and fire: Please protect this bakery space, Help the bakers move with ease and grace, Fill the breads we make with nourishment, good flavor and the seeds of awakening.

Another is offered specifically for the spirit of the oven:

O mighty oven! Please accept our humble loaves and bring them to their full potential.

“There’s something about the energy, love and dedication,” Heller says. “We do so much hands-on, detailed work in our kitchen, in how we take care of our guests, and our very intensive care of our vegetables and the farmers’ market stands, and it shows. We produce beautiful vegetables by people who have passion.”

Heller says she thinks of Green Gulch as a microcosm of the world, with the same challenges and issues everyone has everywhere. But she notes that it’s also a very rare and exceptional experiment.

“There’s really no place else that you can have a full, productive organic farm, a meditation practice, and have such a full community life, with the primary vow to be of service,” she says. “The people who come here have had a beautiful vision.”