Eyes on the “Food” Prize 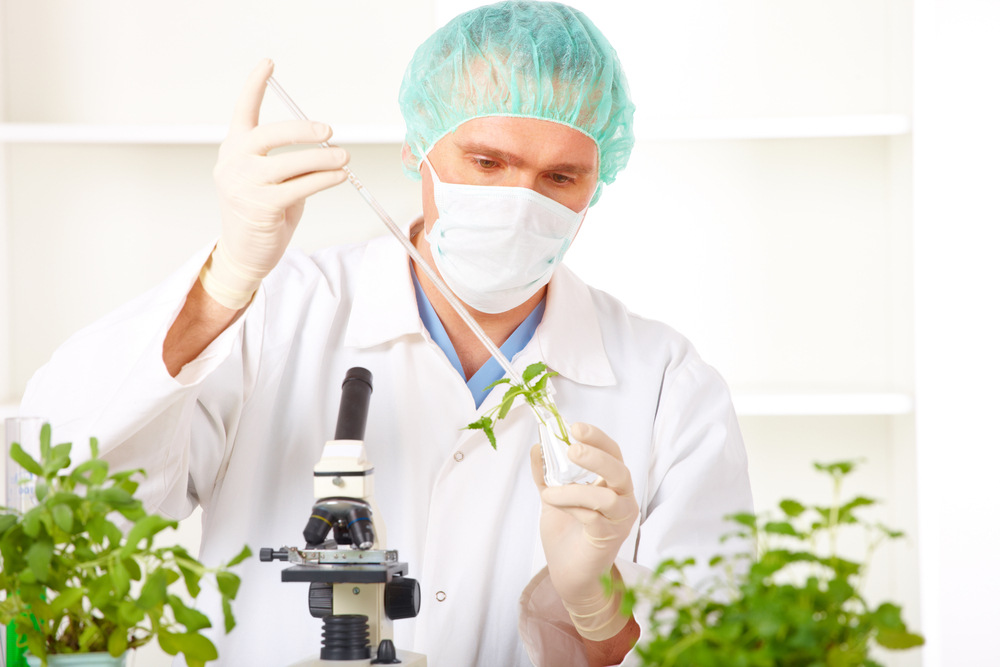 The World Food Prize, given annually at a high-profile ceremony in Des Moines, Iowa, goes to the individual or individuals who have “advanced human development by improving the quality, quantity or availability of food in the world.” It should come as no surprise, then, that this year’s World Food Prize goes to… <noisily opens envelope> Dr. Marc Van Montagu, Dr. Mary-Dell Chilton, and Dr. Robert T. Fraley for their work in the development of genetically modified (or GMO) seeds. Oh, and Fraley is Chief Technology Office for Monsanto.

Now, look, you can make a reasonable argument that these scientists’ work represents a very real advance in biology. The ability to insert genes into a food plant from other organisms in order to confer resistance to chemical herbicides or to express a pesticide directly from a plant, as the vast majority of genetically modified seeds can, is impressive.

But, the “quality, quantity or availability” argument for GMOs is a bit harder to make especially because, as this USDA-funded study found [PDF], the yield benefits from GMO seeds are minor and decreasing.

Before we go any further, however, it may interest you to know the identity of the major sponsors of the World Food Prize Foundation, the organization which offers the prize: 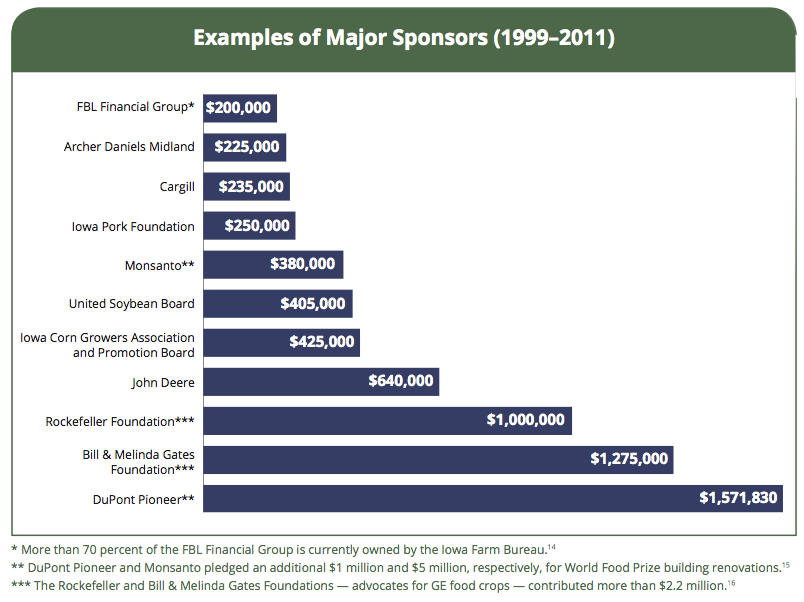 Notice the pattern? The sponsors, by and large, represent the interests of large-scale industrial agriculture and biotechnology. Meanwhile, the two foundations which have over the last decade given the lion’s share of money to the World Food Prize Foundation are strong supporters of technology, bio- and otherwise, as a means to addressing food security.

The Bill & Melinda Gates Foundation, for example, has devoted significant sums to biotechnology research while the Rockefeller Foundation underwrote what came to be known as the “Green Revolution” of the 1960s in Mexico and South Asia. The development vastly increased grain harvests in those regions, but also remade much of those regions’ indigenous agriculture in the form of Western-style industrial agricultural. Rockefeller also in part backed the current GMO Golden Rice effort, which has generated so much controversy of late.

None of this should come as a surprise, however. The prize itself was conceived of by Nobel laureate agricultural scientist Dr. Norman Borlaug, architect of the Green Revolution, who wanted specifically to inspire and reward those who worked to improve agricultural productivity. Indeed, according to this history of the prize, Borlaug’s interest in an award for agriculture was expanded upon to “focus” on food by the original sponsor of the World Food Prize–wait for it–General Foods.

If you look through the recipient list, you’ll see that the vast majority of awards were given for specific technological developments, like the award in 2007 to Dr. Philip Nelson, who won for his work on developing “aseptic bulk processing and packaging technology.” Then there’s the 1992 award to Dr. Edward Knipling and Dr. Raymond Bushland, for their work using radioactively sterilized insects to control infestations.

There have been exceptions, of course. Dr. Muhammad Yunus, pioneer of microloans, won in 1994, as did Dr. Verghese Kurien, who won in 1989 for his “discovery” that improving management and distribution of food in the developing world is as important as improving crop yields.

Even sustainable agriculture advocates such as Dr. Hans Herren have gotten the nod from the Prize committee. Herren is President and CEO of the Millenium Institute, whose mission is to enable “a sustainable, equitable, and peaceful global society.” Herren won the Prize for his work on finding a non-chemical solution to an insect infestation that was threatening the African casava, a staple crop in much of Africa.

But, as far as I can tell, no past recipients have been as closely associated with the sponsors’ corporate goals as this years’. If anything, the World Food Prize has become a part of Big Ag’s greater strategy. If you’ve read about this issue, you’ve probably noticed a major public campaign to improve Big Ag’s image and to overcome negative publicity over the food industry’s gloves-off campaigns against the growing GMO-labeling movement.

There are Web sites, academic articles, Twitter-dust-ups and, now, this Prize, all seemingly designed to present the position of the scientists involved with many of these efforts as the “consensus” over the benefits of genetic engineering and to drown out the voices of their opponents, activists like Vandana Shiva, groups like the Union of Concerned Scientists, Food and Water Watch and writers like Michael Pollan and Mother Jones’ Tom Philpott.

It is the very difficulty that proponents have in demonstrating a clear and broad societal benefit from this technology that has led to such transparent maneuvers as giving biotech pioneers a “food” prize funded by biotech companies themselves. There’s no question that GMOs have brought a benefit to Big Ag in the form of higher profits for seed companies and herbicide makers. Farmers in the U.S. (as well as Brazil and Argentina) have also benefited over the last ten years from the increased convenience the seeds offered them. But even that’s changing as the superweeds are winning and American farmers are starting to question the value of planting GMO seeds.

And as Mark Bittman so eloquently explained in his column recently, this focus on biotechology and technological development generally is beside the point, if the issue is increasing availability of food to those who lack it. We already produce enough food to provide enough sustenance to every person on the planet. But with billions either hungry or under-nourished worldwide, the question is where all that food goes.

The answer is that about a third of all food produced on the planet is wasted and another third is fed to livestock whose production can’t possibly be scaled up enough to provide a steak on every plate and a chicken in every pot. About five percent ends up in gas tanks in the form of ethanol or biodiesel–and of course the West eats more than its share of the remainder. Bittman further observes the technologically-based solutions typically involve taking people off the land and moving them into cities in order to feed them more “efficiently.” But it’s not at all clear that turning peasant farmers into city dwellers solves more problems than it creates. This year’s recipients of the World Food Prize, for all their scientific acumen, have nothing to say on that score.

If you want to discover the groups and individuals who are trying to more completely address the issue of food availability globally and what to do about the billions of peasant farmers still working the land worldwide, you’re better off tuning out the noise from Iowa this week and paying attention to the announcement of another prize going on at the same time.

The Food Sovereignty Prize prize is given by an alliance of environmental, sustainable agriculture, and indigenous peoples’ groups which have joined forces to “dismantle systemic food injustice rooted in race, class, and gender oppression.” Past honorees include La Via Campesina, the Korean’s Women’s Peasant Association, and Landless Workers Movement of Brazil.

This year, the prize went to a group known as “Group of 4,” which has been working to improve Haitian agriculture and empower peasant farmers. It’s these groups that have a better grasp of the monumental challenges faced by billions of the world’s poor. And while technology will play a part, it’s not the only, or even the ultimate, prize.

Enjoy stories like this one?  Time is running out! Help keep Civil Eats alive by supporting our Kickstarter Campaign before October 18.